Skip to content
It’s been a while since my venerable (okay, decrepit) Peugeot has scored a mention here, and that’s probably a pretty good indication of how slowly I’m progressing with the rebuild. What with rebuilding the chook shed, fences and just the usual bread and butter stuff, the Peugeot has had to take a back seat.Despite the title of this blog (the single speed bit) I was thinking I might put gears onto the Peugeot. Who, after all, needs five bikes all with one gear? Surely I can have one geared bike without being labelled a heretic? But there was a problem with that idea. See below:
If there is one single reason I went single speed I reckon it would be worn and unreliable gears.  If gears can’t perform reliably, quietly and smoothly despite my irregular service schedule then I don’t want them. Nothing kills the harmony of a ride faster than dodgy mechanicals. It’s like sitting down to write your blog but some stupid fly keeps stopping on your head for nano-second at random but frequent intervals. (Take notice, stupid fly!)
The jockey wheel shown above is worn well beyond its service life. I raised a few eyebrows when I showed it around the local stores but found no replacement parts. (It’s funny how seriously bicycle mechanics view worn-out bike parts. I was pretty proud of my efforts but they behaved like I was a child beater.) So the Peugeot rebuild looks like being another fixie.
So you have to differentiate your bikes somehow, they all need their separate function…or at least a different look. That way when you wife asks you, “Tell me again why you need so many bikes,” you’ve got something that’s approaching a believable answer.
Thinking about that I reckoned maybe a set of mustache handlebars would fit the bill. I’ve long been keen on them, their strange curved shape and the promise of so many hand positions. I do a few longer rides on my fixie and the ability to stretch out into a more aerodynamic shape appealed, especially since you can’t change-up a gear or two on a single speeder.

I got my mustache bars from Velogear.

Mustache bars inhabit a space somewhere between quirky and daggy. I’ll let you know how they’re received on the street. Not many fixie riders have adopted them so I’m assuming they’re not cool.  Whether they’re fixie verboten or just unknown is something I’m set to discover. At any rate, they allow me to convince myself that they’re now helping the bike take shape as a long distance fixie, so in that way they’re fulfilling their purpose.

The problem with mustache bars is they look kinda awkward when you put brakes on them, and  yes, despite me using the term fixie so freely I will have brakes and a freewheel on this bike. I have no intention of doing three hour rides on a bike I can’t coast on. You gotta be made of Milo for that kind of treatment and I’m barely Ovaltine. Fixie’s a bit of a general term these days and not all fixies are fixed. Mine won’t be.

The use of brakes on the mustache bars does ask some questions of aesthetics though and nothing in my parts bin could satisfactorily answer them. I think I’ll be back to Velogear, Cycling Deal and the LBS to scour for some suitably funky levers. Maybe something like these anodized numbers below: 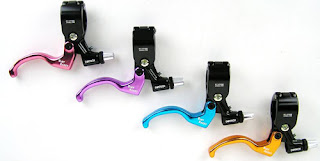 Meantime I haven’t been totally ignoring the other Peugeot, the mixte I picked up at the All of Brunswick Heads Garage Sale. The bike is now in a roadworthy state, but only just. The cranks have been taken to with a hammer and spanner to get the old cotter pins firmly into position so the cranks don’t wobble. The brakes have been given some attention and a new set of pads, the old ones being so hard they were good only for slowing the bike to a graceful stop when you had the patience and time to do so. The mudguards are rattle free, though sadly the front one is now a black plastic number after the fixtures that held the other one together fell to pieces in my hands.

I’m not sure how far the mixtie fixie will progress into its restoration. The 27″ wheels make life a little difficult. Finding an affordable but decent 27″ fixed wheelset could prove to be a sticking point. Right now it’s a single speed and despite a slow leak in the rear tyre it’s a hoot to ride. Riding around in the rain yesterday without water spraying up my back was a right pleasure. Life moves pretty slowly on the Peugeot mixed, a nice contrast to my usual hammer and tongs approach to getting around town. And I think that is the function of the Peugeot fixie mixte.