Skip to content
I’ve owned more 2nd hand bikes than I have new ones. Probably much more. It’s always hard to tell at which point one bike has become another bike. Parts lie in the shed for years, new parts come along, a bikes forms…
Anyway, some of those bikes were bought on ebay (or it’s old school equivalent, the Trading Post…bought an awesome vintage Raleigh in the 80s…it’d be properly vintage now and I hope whoever stole it loved it like I did) and while I’m not in the market at present I can’t help but peruse ebay occasionally. What I’ve noticed is that fixies have gone from being invisible on ebay to being ubiquitous. Bikes are even aspiring to be fixies that are clearly not of the fixie genre. Witness.

I can only imagine that whoever put “fixie” in the title of this was trying to attract a few more hits on their ad. But really, who goes searching for a fixie and buys a purple dragster instead? Not sure I even approve of dragsters myself. They were a charming design anomaly back in the day and were much desired by children but ditched in favour of proper bikes when it came time for riding to the high school or doing the all important paper run (which was about the only form of employment open to a boy in the early 80s, this being before Australians discovered a taste for junk food and were as a  result still quite a slim nation). (And call me lazy but I got paid a little over $2 a day for my paper run, getting out of bed before dawn and performing several hours of toil. I lasted just long enough to buy that blue plastic skateboard I wanted.)

Similarly, this step through is not a fixie:

It clearly has gears: 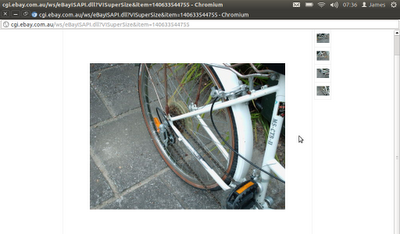 This one below is one of my favorites. The ebay heading reads:

Clearly those hipsters will ride anything these days. Even mixte bikes: 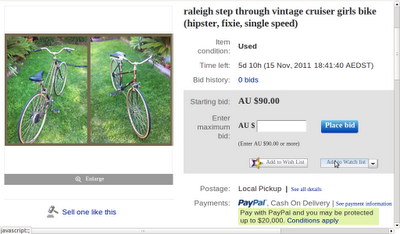 http://www.ebay.com.au/itm/raleigh-step-through-vintage-cruiser-girls-bike-hipster-fixie-single-speed-/120805993058?pt=AU_Sport_Cycling_Bikes&hash=item1c20992a62#ht_500wt_951
The advert for this one has a shotgun approach to describing the bike but fails to mention the one term that actually would actually define the bike, mixte. But you gotta love the hipster term sneaking in there. I know you’re meant to fall into some kind of hipster stereotype if you ride a fixie but to be honest on the Gold Coast I see a random mix of fixie riders blending from nerdy types straight through to surfy dudes and skateboarders looking for something beyond the skate park.
While not fixed, the bike above is at least a single speed, so they got that part right in the description. So it’d be a perfect choice for any hipster dude looking for a bike to match the brown of those vintage suede shoes he got at the vintage fair in the weekend…
Last but not least you can now get coloured brake cables for your fixie: