Skip to content
Carver Surf Racks have been carting my booger and  Dead Man’s down to the beach for well over a year now. It took a while for me to get the set-up sorted but once I had I went from reasonably happy to completely sold on these racks.

Well I’m in my second season with the Carver racks now and I’ve just recently stumbled across a glaring problem, not so much in the racks but in the way I used them. You may recall in my second blurg on Carver Surf Racks (a blurg is somewhere between a blog and  vomiting of words) I gloated about being able to remove the entire rack assemblage from my bicycle in mere seconds. This thing hanging off my bike below: 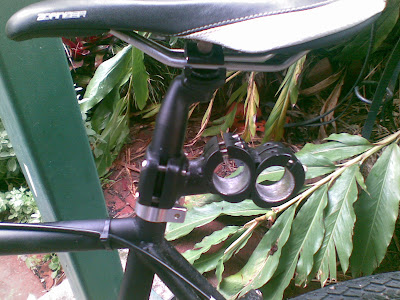 is held on by a mere four botls. The seat post is cinched tight with one bolt. A 5mm Allen key (or hex key as some people call them, not me, a hex key being something Harry Potter might use, an Allen being something invented by Allen who lived down the lane to make his bike bolts look neater) and about 30 seconds was all I required to remove and/or install the Carver Surf Racks.

This all went smoothly for many months, except that I was in process of removing any sign of grease from the seat post. To compound the problem I was also leaving the bike in a high salt environment. The result is that the seat post is now so firmly lodged into the seat tube that you’d think it had been welded in by this guy:

Figuring an application of force might solve the problem I gave the seat several well aimed kicks to the nose. Nothing. Fast forward to me several minutes later, out of time (already due at the beach) and patience (always at a pitiful shortage) smashing the nose of the saddle with a rubber mallet. Nothing. Stuck fast.

Over the coming days I tried everything else I could think of and then I even consulted the wisdom of the internet. Sadly I’d already done everything suggested there except pour acid over it and take to it with a saw.
So I now have an integrated seat mast in my bike, which is very pleasing as they’re very popular in high-end bikes. Like this guy from weight-weenies:

So I’ve added value and increased desirability of my Mojo. Problem is, I can’t easily add/remove the Carver Surf Racks, so I’m going to spend half the summer riding about with the wings of the racks hanging off my bicycle.