Skip to content
I’ve been reading a few blogs lately offering various opinions about bicycle advocacy. Bicycle advocacy is not something I accord much space in my meagre brain. Timid, kind and well meaning people might like the feeling of impotence they get from trying to convince those unwilling and unable to understand but for me wasting my breath on people who don’t care I exist is counter productive.

If you’ve ever ridden more than a few k’s on a bike you’ll realise that it’s the God given right of cars to cut you off at intersections and roundabouts. This is because you don’t exist. It’s their God given right to overtake you mere seconds before T-intersections and roundabouts and then squeeze you at that intersection. Because you don’t exist, or anyway if you do you’re the kind of nutter who is easily dismissed. It’s terra nullius applied to the road. Cars take sovereignty of the road because no-one else is using it.

I’d been cut off for about the fifth time the other day and my mind wandered to what we could do to educate the half-wits who plague our roads, and whether or not there might not be something in this bicycle advocacy business. My musings turned to this device, the Contrail bicycle advocacy tool: 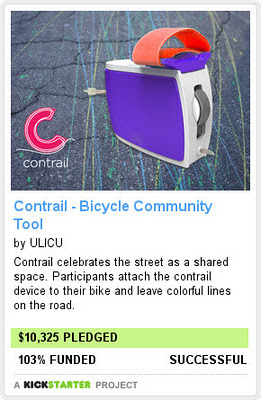 It seems the idea of this devise is to paint nice little chalk lines on the road to let people know bikes are riding there. Should the average driver of an SUV look up from playing with the radio or touching up their make-up at the stop lights and see those lines on the road I can imagine they might wonder for the merest moment about the origins of those lines, then get on their mobile phone and start yacking with the thing pressed to their ears (because owners of SUVs, Porsches and other such expensive vehicles never seem to have any money left for a hands-free kit).

Like all good ideas I think the Contrail is pointing us in the right direction but is possibly not the whole answer yet. We need something with a little more kick in its tail to make people notice us. What I proposed to myself in my riderly musings was a bicycle advocacy device more like this:

My plan is simple. When a car cuts you off at an intersection you shoot up the car with paintballs. In my eyes that’s a harmless and bicycle advocacy-friendly way of letting the drivers know you exist (compared with the alternatives that come all too readily to mind). If they do something particularly stupid, like you know, squeezing past you on a busy road with less than an inch to spare even though a red light is plainly just about to stop them anyway, you can shoot up the windscreen with five or six paintballs and flip them a nice little ironic smirk.

Oh yes, I’m warming to the idea now and can see myself getting fully onboard with the whole bicycle advocacy thing in the future. To date, my attempts to educate the stolid  lumps that sit behind steering wheels have rarely progressed beyond short implorations asking them to reconsider their ill-manner wways. To wit, “What the f–k do you think you’re doing you f–king moron!” Clever stuff like that. I can see now that my anger was misdirected because I didn’t have the proper tools of bicycle advocacy at my disposal.

When I come across some nice folk parked in the bicycle lane of a busy two lane road I dream of smashing their wing mirrors clean off their car. Sometimes I give one a good thump with my hand. But, apart from not  being very hand-friendly, this approach is considered counter-productive in my new bicycle advocacy world. Much better to shoot the car up with a half dozen paint pellets. I’m sure (most of) the paint would clean off.

Occasionally a driver will do something especially heinous and for them we’d have to drop a paint bomb in through an open window: 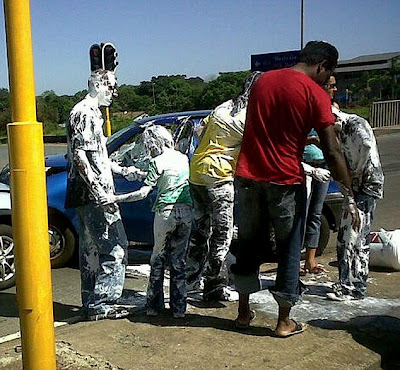 Photos like these go round the world and provide a great way to spread the bicycle advocacy message. It’s too bad more people like me don’t join together to advocate for a bicycle friendly roads.