Skip to content
Having just completed a bicycle restoration and stared down the barrel of yet another I’m well aware of the economics of restoring bicycles. In short, it don’t add up.
I started with a fine frame, a Peugeot frame made with Columbus tubing, and mostly good parts. I stripped down the frame and then considered my options for making it shine like new. The best option was to send it away for sandblasting and a re-spray. Problem was, by the time I’d done these two simple things I would have already exceeded the budget required to get me a quite decent frame brand new . Not that I wanted a new frame, but my penguin accountant crunched the figures and I couldn’t deny the logic of his comparisons.
So I did a DIY (which I might go into another time). Sanding a bike is a freaking nightmare. The original paintwork might have been all bubbled with rust on the top tube but the rest of the paint was stuck on like…well…paint.
Anyhoo, that’s a wee background on the perils of restoring a bike. If you have to replace  a bunch of parts (like I do on Peugeot number II, the restoration I’m yet to start) then you’re exceeding the budget of a quite decent new bike and still might just end up with a pile of crap if you’re not careful. I’ve already mentioned in other blogs how I stripped down an old Repco, converted if to a fixie, then found out in my test ride what a slow and wallowing  piece of crap it actually was. It is permanently bolted to an indoor trainer now because I refuse to ride such a tard bike on the street.
It is with these thoughts in mind that I contemplate Mrs Fairweather’s Bicycle Emporium $1,150 restored Repco:
It’s a beautifully restored Repco, to be sure, custom paint job and headtube badge, but it’s still just a Repco. Hopefully it rides better than the old piece of junk I own though I suspect that this manufacturer and retailer of car products has always sold into the bottom end of the bike market, affordable bikes that kids like me (circa 30 years ago…) smashed around the trails, did skiddies on and dinked his mates on.

It’s lovely that Mrs Fairweather Bicycle Emporium have salvaged this old bike, and good environmental policy and all that twaddle, but is an old K-Mart bike with a new paint job and parts really worth more than double this bike by Jelly Bean: 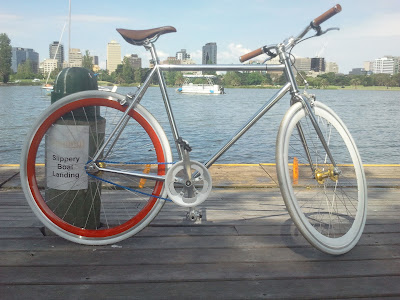 The difference here is I know the Jelly Bean rides very nicely but I have grave doubts about the Repco.

I love to see old bikes given new life but I’m not of the opinion that old stuff gets new virtues just by being old. That is, I’m not gonna get misty eyed over the old Norther Star I smashed up over jumps when I was a kid. (Apparently a racer with BMX handlebars is still just a racer.) Whereas the lovely old Raleigh I owned (that was subsequently stolen) was a beautiful bike then and would make a lovely bike restoration piece now.

The sad fact is that China and Taiwan knock out cheap frames of (often) good quality, making it all but impossible to run a business that restores bikes at competitive prices. But that doesn’t mean we shouldn’t buy restored bikes. We’re cyclists, not economic rationalists. My fear is that the Repco above might fail us both as cyclist and economists. I can only hope it doesn’t.

Speaking of my Raleigh, maybe this is it. Who knows how many hands and what journey it has been through since it left me.

Is nostalgia enough to get me to fork out $1,200 on a restored Raleigh? Probably not, but I’m a notorious tight-arse. I’d probably be a better man if I was capable of buying a bike where reasons of the heart overwhelmed my inner penguin.

Love those funky handlebars on the Peugeot above. This beautifully restored bike (Carlos) is $990.The wheels are 27 inch so it’s older than my restored Peugeot and somewhere about as old as my Peugeot mixte that I’d love to restore but can’t really convince myself I want to commit the dollars required to do justice to the old dame. Perhaps it’s just as well people like Mrs Fairweather’s Bicycle Emporium do the restorations without penny pinching and charge what it costs. But…I’m just not sure I want to pay this much for an old bike when I can get a lovely fixie from Mongoose for half the price:

Sometime in the future I reckon I’ll strip down my Peugeot mixte, re-paint it, get some new wheels and cranks on it and give the old girl a new life. It’ll cost me more than the price of a comparable new bike but it’s something I want to do and I feel like I owe it to the bike. I remember my excitement when I saw it in a garage sale. I’ll have to do justice to that excitement and get it all fixed up. I know it’s a long journey from old piece of crap to fine bike and by the time I’m finished I’ll probably have spent  enough to have bought a bike from Mrs Fairweather. For me though there is a difference between forking out on reno you’ve unwittingly lumbered yourself with and paying someone $1450 for this, a standard girls bike. 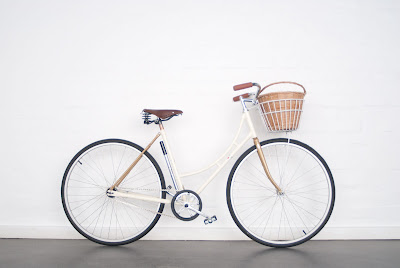 I hope someone buys these beautifully restored bikes. I just know it won’t be me. Which is a pity, because I really want to like Mrs Fairweather and her bicycle emporium, but maybe I’m just too cheap. Or maybe I’ve got my head screwed on right. You can be the judge.