Skip to content
After something like 200mm of rain here on the Gold Coast in recent days you’d need webbed feet to celebrate National Bogan Day in the kind of style that is becoming traditional.
The word traditional always irks me. We tend to make up stuff and pretend it’s tradition because we lack any actual tradition or culture of our own but we’re eager to fill the gap. I have friends who earnestly believe it’s traditional to pop a lamb chop on the barbie for Australia (aka Bogan) Day because Sam Kekovich and his lamb mob have convinced them with a couple of clever adverts:

The Barbie Girl clips is over at Sam Kekovich HQ.

Back in my day (ie traditionally) we actually did sweet FA to celebrate Australia Day. Back then it was a proper Australia Day with all the apathy and lazy assumptions about nationhood that only Australians were capable of. We took it as read that it was our right to have a day off in our honour and actively do nothing to honour it. It was a day for catching up on the lawn mowing and enjoying a barbecue but probably never actually mention Australia or even wonder why we had a day off. This was just one in a bounty of public holidays to be squandered at leisure. Nowadays, at least on the Gold Coast, we’re attacking Australia Day with a flag-waving beer-fueled fervor that requires a police presence almost unprecedented. Only the Finks or Banditoes riding en masse require such a high police to population ratio.

Last year my ride in Surfers saw dozens and dozens of police in the normally quiet parks of the Gold Coast. There were police on foot, driving along the footpaths in cars, on horseback and in those little carts normally associated with garage collection. Police every-fucking-where. I have never seen so many police anywhere in my entire life. And all this to prevent the celebration of our heritage and culture from turning ugly. In recent years proud and patriotic Aussies have got themselves fueled up on beer and then run riot and randomly smashed up the shit that belonged to their fellow Australians.

One thing that joins Australians on NBD is their love of cars. Everyone gets in a car and drives to the Gold Coast. And then, as a rule, the traffic grinds to a halt. For many, NBD is something to be shared with friends from the seat of a Commodore.

So, with all the organised celebrations rained out we Australians will no doubt take to the parks and beaches in the thousands to drink and get sunburned. As is tradition. And later, if not properly supervised, go run riot and smash some shit up. My advise is to get on your fixie and go somewhere interesting. Grab a wave. Have some fun. Just don’t do anything too traditional. 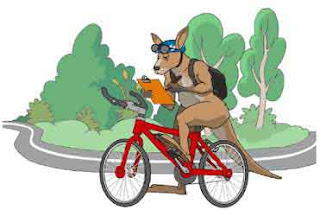