Skip to content
When along came the single-speed/fixie movement it brought with it a certain look and now people poke fun at the bikes, clothes and the ironic moustaches. They like to pretend that everyone who rides a fixie is a fixie hipster and that the bikes are responsible for making everyone look like dickheads.

The truth is no-one knows why teenagers dress like dickheads. As I was just cresting the peak of my youth the new generation came along wearing really baggy shorts. Who knew you could get so much material into a pair of shorts? And then they started wearing the shorts really low so you could see their cool Bart Simpson satin boxers. And then they came up with another meaningless and annoying dress code. And then along came fixies and hipsters, not always together but often yes, and a cool scene grew up alongside the bikes and suddenly made bikes became popular.
People who commute on bicycles often look like the kind of person who laughs too loud at jokes, or does not laugh at all but looks around the room trying to guess what’s so funny. A quick visual survey of  few fellow cyclist yesterday proved that most would be lucky hold down a job. Their clothes looked like a random collection of hand-me-downs, their moustaches lacked irony, and their bikes would have been crappy bikes even before years of neglect.

And this is the problem with so many cyclist. They looks like they’ve come to cycling for lack of any other options, you know like money for a bus fair or friends with cars. Or friends at all.
Then there are those well-meaning bores who fill the pages of the magazines published by the bicycle advocacy organizations (Bicycle Victoria, NSW etc). They probably have terribly orderly homes, wear ten types of safety day-glo clothing and stop at all the stop signs and indicate left and right turns with their outstretched arms. They probably even indicate a stop with the bent arm stop sign.

With these cyclists at the helm cycling was in the doldrums. For years I rode around and if I wanted company, any company at all, I had to don the lycra and go for a training ride with some mates. Thankfully, along came mountain biking and I could get out with mates without the cross-dressing. But I rarely saw anyone commuting and when I did they wore these:

But yes, somehow, despite not trying to, we often do conform to stereotypes, and if a few fatties want to poke fun at us from the safety of their arm chairs then let them do it. I’m too old to have a natty hairstyle and skinny jeans would make people laugh in my face. So what do I care? Dress with some style and get out and ride with some style. It’s the only thing I’ve seen in 30-odd years of riding that has made cycling even remotely popular.

Just be wary of taking some of the stuff too far. At a certain point even other fixie riders will make fun of you. 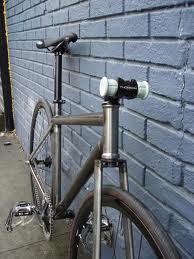