Skip to content
Greater love has no blogger than this, that he would lay down his own cash for his gear.

Sometimes I get to try free shit and write a bunch of nice words about it and return it. It’s fun and it’s a little bit like owning it but you do have to give it  back, which is more like steeling it but getting caught. Sometimes the stuff is nice but a little superfluous to my life. This week I’ve had a Corsa by Single Speed Cycles and it’s a great bike but I don’t really need another single speed in the garage. What am I secretly hankering for an eight speed so I’m going to accumulate eight single speeds? No, I have enough of those. It’s fun to ride but giving it back won’t put a hole in my life.

Not so the Chunky Toad I reviewed last year. Some would argue that I already owned three cycle back-packs but I would counter that two of those are Camelbaks and the third was, well, not a Chunky Toad. So there was a glaring hole in my collection.

I can’t really say that I laid down my own cash since I actually requested it as a birthday present. Economists would say that the opportunity cost was mine and so I’m saying I in effect purchased the Chunky Toad. I’ve certainly defended more absurd logic in the past. (And thankfully the people who actually bought the Toad don’t read this blog so they’re unlikely to be insulted.)

So what’s so good about the Chunky Toad you ask (because you’re too lazy to read that other shit I wrote about it)? Well let me explain with an example. There were two games of soccer to play last night, one indoor and one outdoor, and the Chunky Toad neatly swallowed the load for both and was comfortable on my (rather dodgy) back and got all that gear from home to game one to game two and back home again. That load included a soccer ball, two jerseys, soccer boots, three drink bottles and a tool bag. Ah yes, let me tell you about the tool bag. 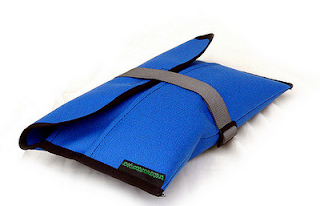 The bogear tool bag could easily have been the answer to a question that didn’t exist, except in my case it did. I’m often transferring between bags and bikes and sometimes I take no bag at all, yet it would be a silly person who shot out for a 30km ride with no spares because, you know, I really hate walking. Really. I get all winy when  my wife wants to walk to a the corner store. Riding without spares provokes the cycle gods and they will puncture your tyre. So it’s best not to test them because it’s a long walk home.

Anyway, the tool bag wasn’t expected but had been foretold. It was a bit like that VB ad where the guys says, “You know what they should make.” I’d been ruminating (out loud, because my wife is just sooo interested in all this stuff) that what I really needed was something to put my tools in so I could cart it from bike to bike and bag to bag…and voila!

The real star of the show is the Chunky Toad though and now that I officially own it I went to the trouble of finding the hidden pocket.  When you buy one make sure you get instructions. I now totally know where I’m storing my drugs on my next trip to Bali. It’s such a shame Corby didn’t have access to bogear bags.

I won’t bore you with more details of the Chunky Toad since I’ve written more than enough words about it in the past. I just thought that I’d wish myself a happy birthday and let you all know that yes the Chunky Toad holds a premium price but it’s worth every cent, even when those cents are mine (or someone very close to me…thanks Sophie! Who am I kidding, she’s not reading this).