Skip to content
“Hey, nice bikes,” my neighbour called as I left the driveway on the Corsa by Single Speed Cycles. For a bike that is currently selling at $299 that was a good start. Alder has certainly never commented on any of my regular rides. So, let’s stop for a photo opportunity…
Okay, moving on. The bike was a demo that had seen a good year of action. Despite that it was in pretty good shape and reasonably free from major wear and tear. All bearings felt smooth and sure and the paintwork hadn’t been kicked about too much. Still shiny.

It was a beautiful afternoon for a ride so I tried to capture it in a panorama. The picture below isn’t perfect but you get the idea.

Photography isn’t my strong point so let’s talk some more about the bike.

One of the first things I noticed about the bike was the groovy forward bending handlebars. 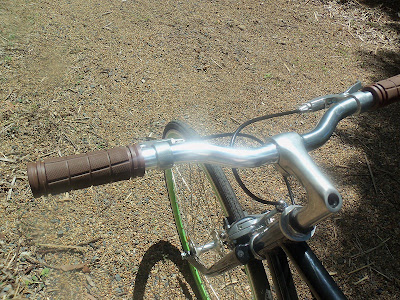 They add a bit of character and a unique look to the bike and everyone wants that from their fixie for sure…but they also make for a reasonably long lean forward when riding and I was starting to think that straight bars would be better. Then I took it out on Tuesday and had to beat into a 30 knot headwind and was glad to be in the tuck, so to speak. The deep dish rims also helped here when ploughing into the headwind. There were a few moments when gusts made it seem like I’d be blown backwards but once I got a rhythm going this surprisingly smooth riding bike allowed me to develop a decent tempo.

I reckon, on balance, I’d still prefer some straight bars, but I’m not the tallest bloke in the world. Single Speed Cycles are considering a change to straight bars and there will be pros and cons if they do. For me it’ll be more good than bad. Despite the headwind experience I would on balance prefer less reach in my ride. Of course, you could flip the bars up like the guys in this video, and they must be cool right because they’re in a video?

The bike rolls like a much more expensive bike. I really would not expect to enjoy riding too many bikes sold at this price but the Corsa is a seriously good ride. Something I have written about before is that simple mechanical annoyances can really foul up my ride karma, but I was always keen to take out the Corsa and ride and be seen and pretend people weren’t sneering at the old guy posing on the fixie.

The freehub is a gooden, especially in contrast to my own (which has suffered in the recent bad weather causing me to briefly flirt with riding fixed). It’s one of those that give a reassuring clickety-click noise, not your ninja freehub that allows you to glide past unsuspecting pedestrians on the bike path and watch them flap in panic and surprise. It’s probably only because of the comparison to my own bike’s woeful freehub that I noticed the freehub but it did feel gloriously smooth and I was thankful for the sure and reliable engagement.

This smooth riding bike sorta disguised the 48 x 18 gearing, which is a pretty tall gear for my skinny legs. My normal ride is a 42 x 16 (which my fixie Android app tells me is a gearing of 2.63, while the Corsa pulls 2.67…yes, meaningless figures really but you’re meant to nod and pretend we’re all being very clever here) and I wouldn’t want to go much higher than that. The tall gearing would certainly suit anyone with a decent set of legs but given that this bike will appeal to a lot of new riders I think maybe the gearing is too high. Or maybe I’m going soft. My advise is, if you’re reading this and you’re already a cyclist and are looking for a ride to get about on, the gearing will be okay. If you’re not a cyclist then prepare to man up.

For most of the time the gearing was fine. If I wasn’t riding around the whole time second-guessing the bike and making notes in my mind for this review I probably wouldn’t have focused on it too much…except for when I challenged it to some hills. I crawled uphill half expecting some old lady pushing a shopping trolley to overtake me…or some punk on a racer to humiliate me. Then I got on the flat and put the hammer down and was grateful for the big gear. I was tooling through Surfers on yet another ride and got busted by a guy on a racer as I was having an idle moment. I was able to put the hammer back on him and then take a few turns into the headwind. There aren’t many bikes under a grand that can do that. Pros and cons. Again I’d probably like a smaller gear on balance but I’m not saying it’ll be right for everyone or every situation.

So let’s examine what you get for 300 bucks (less a dollar change for sherbet bombs).

Like most fixies it weighs in on the heavy side. You want a steel frame and deep dish wheels then you gotta tolerate a bit of heft. (You want deep dish wheels and light weight then you want to empty out your wallet  right there. Try search eBay for Zipp wheels.) The frame is a good one. It feels solid in the bottom bracket when ploughing into merciless headwinds (yes, they’re merciless now, I’m getting all melodramatic) or when pedaling out of the saddle. Yet the bike is one smooth ride. Has Single Speed Cycles been in the lab with Specialized perfecting the laterally stiff yet vertically compliance ride? Have they hidden ridiculous gel inserts somewhere? Nope. They rely on a technology so simple and effective that its demise can only be a source of mystery and bewilderment: bent fork legs. Most people will buy a bike with either straight of bent forks based purely on their preference for how it looks (or that’s how I did it anyway) but with the bent legs you definitely get a smoother ride.

The frame itself is well made for a bike at this price. The paint job still looked shiny after a year of abuse.

You can see from the photo above that some of the finishing isn’t as elegant as you’d get on  a handmade frame. The point here of course is that it’s not a handmade frame. The whole bike can be purchased for a quarter the price of  base-model handmade frame. You have to forgive it a few indelicate moment. The dropouts aren’t the pettiest I’ve seen but the overall effect of the bike is…well it’s good enough to draw spontaneous comments from your neighbours.

On the comfort side, the seat lets you down a bit. It’s no better or worse than the seat on the Jelly Bean (and may have been the same seat) but you do notice it after a while. I did a 20k loop the first day and I’m sure I could have done another so the seat’s okay, it’s just not great. On par, I would say.

The bike doesn’t carry much rubber and I had a few nervous moments when I thought I might have pinch flatted getting lazy on the curbs. I like a size 28 tyre and the ones on this bike were in the 22-23 range. Whether you like the skinny rubber or want a bit more bag in your tyres will depend on how and where you ride.

I often feel a little silly mentioning brakes on a bike where many of the owners will chuck them soon as they purchase it, but I love a good pair of stoppers and the Corsa had a good pair. It’s one place where cheaper bikes often make the biggest sacrifice. On those hybrid abominations all the coin goes into gears and suspension and so forth and the brakes are often barely adequate when new and their plastic levers and adjustment screws quickly degrade and require replacement. The Corsa had a lovely pair of brakes, solid metal with adjustment screws and nice bearings (or bushes, who knows) at the pivot point. I can foresee no maintenance woes or  losses in stopping power there.

And that last point is a good one to make about the Corsa. There is really nothing on there that is going to prevent you from riding one smooth and enjoyable bike day in and day out. With proper use and abuse bottom brackets and headsets wear out but there is no obvious weakness here that will cause problems. A lot of that comes down to the fact that it’s a single speed but even a single speed has to give up something when being sold at $300, yet it’s not obvious what that is. This bike, you can jump on and enjoy any time you like. It rides like a much more expensive bike. Sure, your mate rolls up with a Bianchi Pista, you’re going to burn with envy, but there really is no guarantee you’ll enjoy riding your Corsa any less than he enjoys riding his Pista. Your advantage is that you don’t have to go into a flap every time you leave it outside a cafe because you’ve only spent $300.