Skip to content
There really is only one month of the year when a moustache is socially acceptable, Movember. If you’re doing it to raise money for cancer research then you can grow the handlebar moustache of your dreams and people will admire and praise you for it. The rest of the year you’re either Lemmie from Motorhead or some sad fool who wants to be Lemmie from Motorhead.A special moustache exemption can be applied for if you’re young and hip and your style is self-consciously ironic. I lack the requisite youth and hipness and so moustaches are officially off limits for me. And anyway, most hipsters look like complete pratts with their wispy caterpillar moustaches. Irony can be as allusive as dreams and you never can really tell if that moustache of yours is the very latest statement to set off your post-modernist sartorial flair or you just look like a escapee from a Solo advert.

So really (and here I’m getting to the point of my argument) the only alternative to handlebar moustaches is moustache handlebars. To wit I present:

Advocates on the moustache handlebar will tell you the bar offers more hand positions, allowing you more options to get comfortable on longer rides. I’d also point out that they have a surfeit of curves and on paper an excess of curves on your fixie looks to be a good thing.

Part of the reason I wanted moustache handlebars is because they’re quite wide. I run contrary to the fixie fad for stubby butts poking out from the stem and I actually like a fair bit of bar to hang onto for leverage and steering.

Beguiled by the curves and the width and drawn by a desire for the moustache I could never have I bought the moustache bars shown above from Velogear. They did initially send out the wrong bars but that was quickly rectified with free postage both ways and a set of very curvy bars showed up in the post soon after.

The other part of my reasoning for moustache handlebars was to give me a shorter reach to the bars. The 54cm frame of my 80s vintage Peugeot has a standard 54cm top tube when measured with the tape but the geometry does some kind of strange trickery and the reach to the bars is quite long (and my arms aren’t). A taller friend who rides a 56cm frame rode the bike and even he found the reach to be quite long.

When I first installed the bars on the Peugeot they looked pretty cool. So loopy and and curvy. And then I put brakes on them and spoiled the whole visual purity of the uninterrupted curves. The Peugeot is geared down and is my bike for longer rides and hill rides so brakes were essential. I’m not riding either fixed or brakeless down a 70km/hr descent. 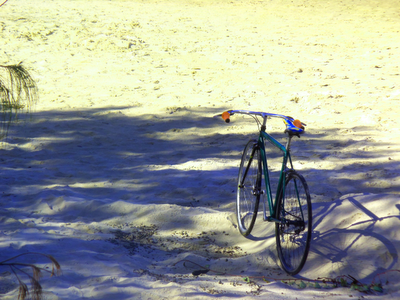 In the shot above (where my bike just happened to wander onto a beach near Noosa) you get a hint for the curves of the moustache handlebars but can’t really make out the brakes.
Here’s an even more beguiling and useless photo of my moustache bars:

If you had one of those forensic tools like they always have in crime shows you could zoom in and identify not only the curvature of the handlebars but the fingerprints on it too. But since we live in the real world and you can’t see jack shit I’ll offer you this photo: 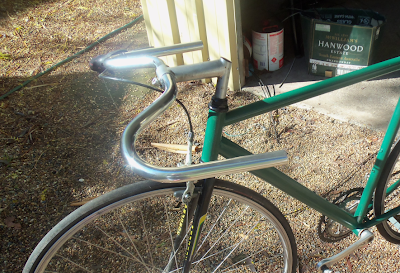 Here you see the handlebars in transition from swoopy uninterrupted curves of steel to dorky brake laden freakbars. Yes, sadly the more brakes you put on a moustache bar the stranger they appear. The fact that I used 105 road levers didn’t help much either.
I’m thinking of replacing the 105 road bike levers with some fixie approved levers like these felllas: 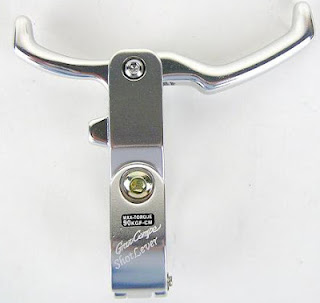 Or maybe even some bar end levers like these: 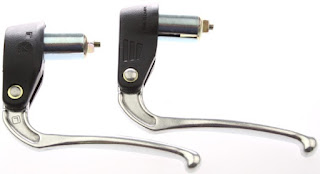 But the problem is that the moustache handlebars work so well with standard roadbike levers. You can cruise  with your hands on the flat extension and the brakes are only a  reach of the finger away. Or you can get your hands up in the curve of the bar or hands over the hoods of the brakes, and the brakes are easily available in any of these positions. So I’m making a decision whether I most value form or function. On this point I’m still undecided.

As you can see from the photo above, the overall effect of what I’ve done, the orange grips, the bare metal, the road levers, is at best disconcerting. I’ve seen enough photos of other moustache bars looking like they’ve settled into their natural habitat to realize the ear-on-a-mouse effect I’ve achieved here is not necessarily the only possible outcome with these bars. I think I need to go back the bike laboratory and re-science the bars with some bar tape and new levers.

When I first rolled out with my ‘stache, my hands on the flat extensions of the bars, I felt pretty cruisey and comfortable with my choice of bars. The moustache bars definitely give you a nice place to rest your hands if you’re in no hurry. It’s a pretty cruisey position. Problem is, it’s not altogether a very natural position. If you reach forward your hands want something at an angle to meets your hands, not something that is horizontal to the ground. It feels good at first but when you return from a one or two hour ride you notice your hands have been cocked into a slightly unnatural position the whole way and are developing an ache. Could be that I made an assumption about the bars and they aren’t meant to be mounted horizontal to the ground. Given that a new position requires only a 5mm hex key about about 3 minutes of my time I’m sure I’ll experiment with angles in the near future.Problem number two with moustache bars and hand positions is that your hands seek out curves to rest against. So you slide forward into the furthest reach and end up in a permanent racers crouch, which is exactly what I wanted to avoid with these bars. Solution is to get a shorter stem (I know, I know, you told me already) and I reckon that’s my next stop.

The moustache handlebars allow me to find positions on the bike that I otherwise wouldn’t. I’m a big fan of bullhorn bars because they let me stretch out without putting me into a racers’ crouch. I’ve hardly used  the drops on normal road bike bars in the last decade because the position is too extreme for anything other than road racing. Moustache handlebars take the advantages of bullhorn bars and turn them up a notch by giving you a multitude of options. Despite looking as ugly as a mouse with a human ear growing out its back and (currently) having all the wrong angles for comfortable riding I’ll be keeping them for a while yet and seeing if I can get them to live up to their potential.

I’ll have a tinker with the set-up of the bars. I’ll adjust the angle so the bars aren’t horizontal and I’ll get that shorter stem. And then I’ll report back to you. I’m not sure I’ll keep my moustache permanently but it’s been an interesting experiment so far. Sadly, no money has been raised for cancer research.