Skip to content
Last week I turned up to soccer on this bike:

And that caused quite a stir.

Unbeknownst to me people were anxious to see what fancy new steed I would ride in on this week. The answer was this bike: 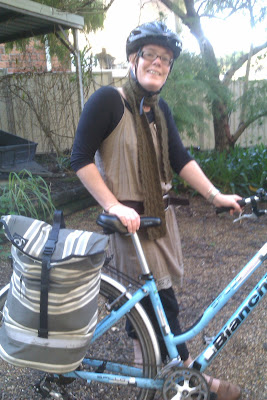 That is, as you can probably see, my wife’s bike. Indeed that’s my wife holding it. My own bike had suffered a headset failure and was not ride-able. Normally I’d park my wife’s bike outside and no-one would know or care, it was only the stir the Jube caused that had everyone taking interest in my ride.
I think I have successfully stymied any interest in my bikes and also any reputation I may have built by turning up with the Jube.
It’s interesting how riding other bikes influences how you feel about your own. I’ve ridden a few bikes recently with low handlebars (the Jube and the Corsa) and now my own felt way too high and wide. So I flipped the stem on the weekend while servicing the headset and now it feels natural to have lower handlebars. It feels right.
The bars a still wide-ish mountain bike bars. I went searching through the shed for replacement bars but could only find bars that were even wider. I run my mountain bike bars as wide as I can get them and still fit between the trees.
As well as my single speed forays I’ve been back on the Cannondale Prophet again lately. That’s this bike: 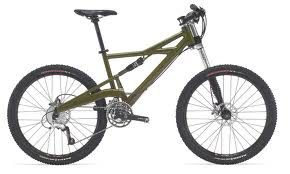 It has loads of gears because I couldn’t get up the hills without them. It also has amazing disc brakes and I’ve jerked to a sudden halt about ten times by grabbing too much brake while navigating traffic. The bars are high and wide so I’m swapping between all these different bikes and somehow the width of bars on the single speed still feels just about right. It’s the inbetweener bar.
I’d suggest swapping bikes for a while as a good way to get a fresh perspective on your own bike. Hopefully it offers new insights that improve your riding like it has for me. Then again, I rode around for years on a single speed Jamis mountain bike that compared so poorly to my Mojo that I never rode it again once I got the fixie built up. Sometimes comparisons can be a little too revealing.