Skip to content
For years now, we round eyes have been reporting back from the Tapei Cycle Show about the strange small wheeled bikes those crazy Asians were busy gawping at and lusting over while perfectly good 700c wheeled bikes stood idly by. These bikes looked like they should fold but most of them didn’t. According to those who like to examine new trends and find reasons for them (like trends follow any kind of logic) these small wheeled bikes are popular because they have a smaller footprint. Apparently when you’re living in a cramped Japanese apartment shaving half a wheel length off the overall length of your bike is important. I’m neither Japanese nor terribly cramped for space so I can’t really comment on the veracity of such claims.

Those who like to visit trade shows and spot new and emerging trends mostly ignored the funny little-wheeled bikes. Of course there were others who couldn’t ignore a stupid idea when they saw one and they started gently exploring the notion of small wheeled bikes in Western markets. Inevitably this notion filtered down to fixies and we ended up with what looks like the a fixie that shrunk in the wash. The mixie.

Renowned cycling blog Gizmodo discovered the mixie late last year and they declared, “I can’t take my eyes of this thing.” They don’t explain just why they were so transfixed. Looking at this bike does leave unresolved questions. The longer you stare the less you know.

Despite my skepticism I have to admit I’m a bit fascinated by these bikes. Will they ride like folders (which can ride quite well but even top-end folders like Bromptons still leave you aware that you have funny little wheels under you)? Or will they have the fun chuckability of a BMX mixed with the urban utility of a fixie?

Professional fashion victims Bless This Stuff describe their fella as “part Urban commuter, part BMX” (sic). Looking at that strangely angled seat I’d say it’s also partly unrideable.
Despite having recently emasculated themselves on that seat the guys at Bless This Stuff have hit on something when describing it as part BMX. If we here in Oz were ever going to have any reason to buy these bikes it would be because we wanted an urban commuter we could throw around like a BMX when the need arose.
Apart from my skepticism for small wheeled bikes I have to admit that I have long held a desire to own a Cannondale Hooligan. It’s hard to say whether the Hooligan was inspired by these small wheeled fixies or the guys and gals at Cannondale thunked up a hooligan bike all on their own. 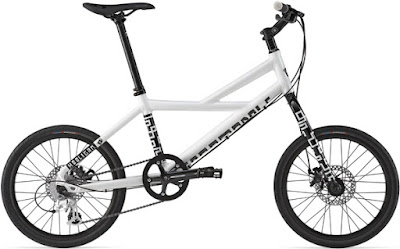 As someone who used to ride a mountain bike around town I still long for a bike I can chuck around when I feel like it but I’m not willing to give up on the speed and ease of use of a fixie. I’m too clumsy to do much  in the way of gutter jumping and general hooliganisming on a fixie and after the first few pinch flats learned to stop trying. From all reports on the Hooligan (of which there are very few) the bike really does commute quite well and is later a bit of a demon with the seat down, as this vid of a guy doing a flip on a Hooligan attests:

The Hooligan is really a different beast from a mixie though. Mixie use can sometimes leave you looking like you’re riding around on a toy bike:

Mojo were the only local outfit I know of who tried to get into the mixie thing. They had this bike for sale for a while: 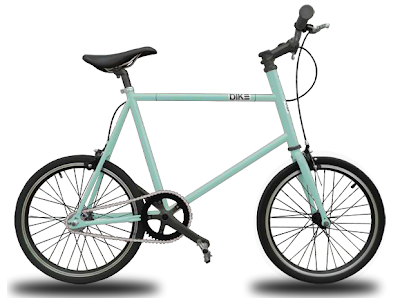 You can still find Mojo’s page selling the mixie if you google it but they don’t have it linked on their main page anymore. I’m guessing they have a few mixies out the back that they’ve all but given up on ever selling.
If apartment living were more popular then perhaps these bikes would gain a foothold in Australia. Problem with that hypothesis is that it’s not supported by the evidence. For instance, I have a friend who lives in an apartment and has not one but two bikes, both of the normal size. So clearly we need people not just in apartments but in small apartments. And then we need other people to start riding these bikes so we, as the hypothetical owner of a mixie, don’t feel like everyone is staring at us. Of course, people stare at you when you’re out riding your carefully curated multi-coloured fixie, but you’re hoping it’s a good stare. On a mixie you could be certain that most people will be thinking, “How funny is that!”
I reckon I’m mixie curious in the same way some people are bi-curious. They’re never going to have same-sex sex but they’re curious. As much as I’d like to own a Hooligan or one of the more BMXy mixies I’d feel massively conspicuous riding one.
If you google mixie you can find enough hits in the US to convince you they’re gaining a foothold there. I remain skeptical, the US being a big and broad enough country to accommodate almost anything. A few web hits doesn’t mean the fixie movement is looking to small wheels as the next evolution (because we all know we’re meant to move over to cyclocross bikes next). This website sells a fine array of audio equipment and small wheeled fixies and is probably a representative example of the depth of the genre. They sell this bike below in pink (because it’s not enough that you’re running around on a circus bike, you need it to be bright pink too): Of course, the small wheel movement isn’t limited to fixies. Non-folding bikes like Moulton’s have long obsessed cycling geeks and the handmade bike industry (which is going from strength to strength in the US) is always looking for a niche. The handmade industry has long inhabited the space left behind by major manufacturers when they moved away from making normal bikes and started making high-end carbon fibre race machines or clunky hybrid thingos and very little in between. Soma, a doyen of the handmade bike, have their Mini Velo, an awkward looking beast that apparently you’re meant to buy because it saves you a foot of space in your cramped living quarters. Hmmm… 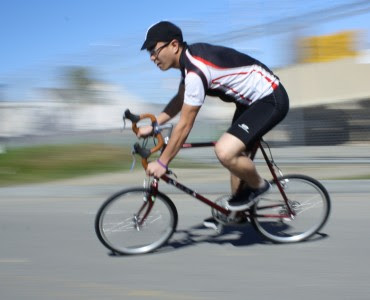 I personally have enough people who already think I’m a bit strange and I can’t really say I’m keen on conforming to type by owning a mixie. Mixie’s are a delightfully stupid off-shoot of the fixie and I hope to see one in the wild one day but that doesn’t mean I’ll ever own one.
And the heading? Will they ever storm Australia? Of course not. I was being facetious.