Skip to content
You know, people who ride fixies have been holding some kinda carnival in Melbourne just recently where people with massive thighs and buttocks got to hang out together without feeling like freaks. They called this the UCI Track World Champs and everyone rode a fixie but no-one wore jeans with the pants leg rolled up or while smoking insouciantly on a cigarette.

It’s been part of a feast of cycling on our televisions over Easter, the other highlight being the Paris-Roubaix, otherwise known as the Hell of the North, or for reasons I can’t grasp, the Parry-Roobay. It’s a race for proper hard men because they ride over cobblestones and…well it’s just the cobblestones really. It’s a great race for cycling enthusiasts also, the type who like to sound like they know what they’re talking about, because along with words like peleton (French for group or bunch) and biddon (bottle) they can add pave (cobblestones). And in case you didn’t watch the commentary don’t try and say pave because you’ll look like a git. It is pronounced parvey for reasons only the French can understand. Makes me wonder what parvey vou francaise means? Cobblestone a Frenchman? Why not. Sounds fun. Or was I not paying attention in my French class?

I love watching cycling and would have watched a great deal of cycling over Easter had I not had better things to do, like socializing, riding, sleeping or watching footy. There were a few occasions when I sat down to watch some cycling and I was genuinely enjoying myself but my wife had that same look on her face I get when she watches Escape To Country and, knowing her torment, I couldn’t put her through the same spirit-crushing torture I’d suffered (over and over again every Friday night).

The question is though, as cyclist, and specifically cyclists of fixies, do we even have to pretend to care about what happens on the track? The answer is of course no. Our bikes might have a track heritage but the average fixie you buy these days has as much in common with a track bike as my dog has with a wolf. Selective breading has ensured the fixie of today is not the beast it used to be. They’re designed across a wide spectrum of course and some of them are more wolf-like than others. Just as some people own Huskies, a dog that can’t bark and is broadly anti-social, some people own Bianchi’s Pista’s. On the other hand there are bikes like Jube Customs and Jelly Bean Bikes. Then there are bikes like the NS Analog that have very clearly been designed by a company that has a dirt jump heritage. This fixie is for tricks and trashings and has nothing at all in common with a track bike except the fixed drivertrain. Doing bar spins was never a design priority for track bikes.

More than anything we’re separated from our track ancestors by the width of our legs. Those riders couldn’t even get a pair of skinny leg jeans on over their thighs let alone squeeze the two or three mandatory rolls of the cuff over their indomitable calves. And that’s just the girls. Big legs, though, are a small price to pay for victory.

Victory is celebrated in many ways and most of them involve holding one’s hands in the air. Tom Boonen, who won the Paris-Roubaix again this year, had barely crossed the finish line before he gave his classic, “I’ll have four lines of coke please,” gesture. 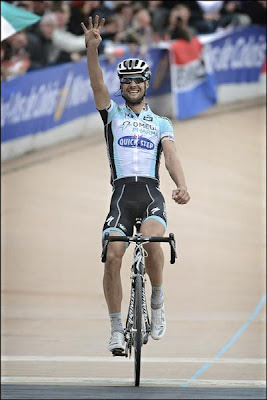 To be fair to Tom he’s only been caught on the gear twice in his career and his job doesn’t involve working with heavy machinery.

An analysis of the medal counts from the track champs has lead me to the conclusion that true competition doesn’t exist on the track, just like it doesn’t exist in commerce. We need only two nations to account for over 50% of the gold medals. One of those nations was Australia so, you know, stiff shit.

Of course, the organisers of the track champs aren’t dead shits and they realise that fixies have a popularity that extends beyond the track, hence the Fyxo Hub. They even let hipsters in.

There was an Eddy Merkx to ogle. 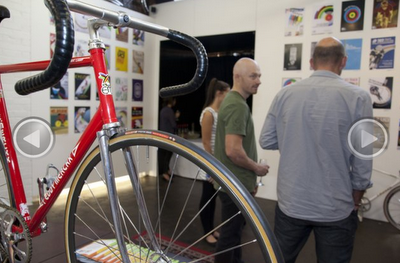 And then presumably someone brought the mood down by giving a speech and everyone shuffled out and pretended to understand the events on the track. (It’s so easy to lose track during points races or the madison.)

Now that we’re some way through the Spring Classics and meandering toward the great tours I’ll have to start paying some attention to cycling. Just as I only watch cricket during the summer I only really follow cycling during the Tour de France, and my knowledge of that is so sparse that half the time I can’t even remember if last years winner has been busted for drugs yet or not.