Skip to content
The journey of a thousand steps begins with the first plodding footfall. Or some rubbish like that. I’m not very good with philosophy. It so often seems to be misused these days to validate self-serving opinions, like when young travelers mis-use my mis-quoted quote above to justify getting a on plane to Europe. You know, Lao-tzu probably wasn’t talking about an actual journey. It was an analogy you young dolts.
Moving on. After taking receipt of the Reid Harrier yesterday, traversing the 4kms to China Town and gorging myself on duck on rice, I set off with a friend on the “St Lucia Loop”. I’ve put the quotes in there because I’m told it’s the kind of ride that’s said with inverted commas around it.
The problem with cycling with friends is they’ll either ride breezily off at what you find to be puke-inducing pace or they’ll drag behind you like a chain. It’s great when you’ve got a group of buddies you ride with regularly but if you don’t then varying levels of fitness can cause problems. This, it would seem, was how it was for us.
It’s not often I’m the faster rider among cyclists, unless I’m riding with my wife or some small children, so I didn’t realise at first that I was the dominant rider. My companion expounded at length on the lovely views (and they were lovely) and the incredible real estate (yes, lovely too) and generally made a fuss about enjoying all the scenery the route provided. All good reasons to go slow. Now, I’m a fan of the leisurely social ride…within limits…but two and a quarter hours to complete a 37km loop is really starting to strain my patience. That’s all I’m saying. But then perhaps I should take a more philosophical approach to matters. Stop and smell the roses (which is probably more cliche than philosophy but you get the idea).
I had warned my cycling partner before the ride that I would have a certain pace on the climbs and was unlikely to moderate that pace either faster or slower because I only had one gear. He shouldn’t worry if I went off the front or dropped behind because I was going the pace the bike wanted to go. What I didn’t take into account was that I would be rolling along the flats at a pace I could sit up and whistle a tune. For some reason Lou Reed’s Perfect Day stuck in my head. It was something of a perfect day and it was a beautiful ride but I really only know the chorus and after a while I was starting to piss myself off. Around the 2 hour mark everything was starting to piss me off and I was turning into a whiny child, waving my arms and bleating, “Can’t we just go a little faster?” I knew I was being childish and that time spent with friends was more important than riding at my pace but I couldn’t stop myself. A guy in his fifties on a dual-suspension mountain bike with knobby tyres over-took us and rode away from us. 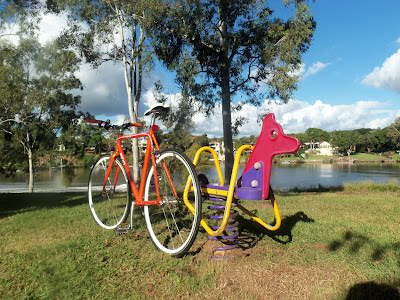 We got lost along the way and found ourselves in this little park on the Brisbane River. I’m a big fan of getting lost while cycling. Bikes are tools of discovery and there is hardly a back-road too insignificant that it shouldn’t be explored by bicycle. I feel sorry for my city dwelling friends who don’t cycle because they can never know their city like we do. (I feel sorry also for those who use their bikes for long boring training rides but not for finding new ways around their city.) As city bikes it’s the right of a bike like the Reid Harrier to find its own way and take me new places.

Doubling back we eventually bumped into the Taylor Bridge and knew once again where the hell we were. By this stage I was starting to get a little concerned about the time because I had some tickets to the football and a one hour drive home to the Gold Coast. Sadly I had to bid my friend a hasty good-bye at the last moment even though he’s heading OS for 8 months. I wish him well and hope he fairs well over there.

And then followed a lovely five minutes where I could finally give the bike its head and let the poor restrained beast ride at the pace it found natural. After well over two hours at an average speed of 15km/hr it was a thrilling experience and hopefully a sign of things to come in the following week as I get to know the Harrier.
I’d like to end this story with some kind  of morality tale about slowing down and enjoying the ride and the company (and there are some trite analogies in this story if we allow it) but really if you enjoy that kind of simplistic nonsense maybe you should try some Buddhist parables, the kind of spiritual confectionery so easily misquoted by motivational speakers like that shepherd of morons Anthony Robbins. My story has no such leading conclusions because clearly I’m not a better person and obviously never will be. But then, perhaps the first step down the spiritual path is to be truly honest with oneself…

UPDATE: buy the Reid Harrier online and you get a special SSGC 5% discount. Click here.
USE DISCOUNT CHECKOUT CODE GCSS5