For about six months now I’ve been trying to read this book: 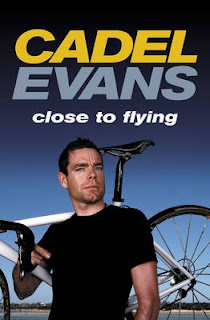 You’re probably familiar with it already. It was published three years ago, before Cadel won the tour, and was the story of Cadel, his cycling, his mum…and how he was…close to flying. (Say that last phrase a bit breathless if you can.)
Soon after the book was published some humorist replaced the photo of Cadel with a more tearful one and changed the title to Close To Crying. That’s a bit unfair to Cadel, who’s a guy who gives his all until he’s wrung out and who wears his heart on his sleeve. As someone who gave up watching tennis years ago because I could find no joy in the machines that play it these days, I’m happy to see someone who makes sport look like the kind of place where the peaks and valleys of emotions are so much deeper than in regular life. Regular life is kind of boring, which is why they make so few movies about it and so many with super-heros and super-villains, vampires and bank robbers.
The other thing about Cadel is he’s a proper tough guy. You don’t win a Tour de France, you don’t even compete in one, without being able to endure what normal people can’t. As Stuart O’Grady says about himself, he’s a guy who can endure suffering more than most, and that’s what makes him a successful cyclist. Problem is, you get in the elite level and you’re among other guys who are top-class sufferers also.
Cadel knows how to suffer, to bury himself and carry on. Let him have a few tears, I reckon. The Close To Crying title of this blog is more a statement of my experience of his book than his lachrymose tendencies.
The close to flying metaphor could get a bit a bit clunky if over-used or used clumsily, which is pretty much what happens here. The prose in this book never gets close to flying but it does bang home the idea that Cadel, on his bike, is very close to flying. (Remember to say it breathlessly.)
We get a full bio of his child life, from early life in NT to the farm in NSW, to how his parents found the farm…and also somewhere along the way to how Cadel got into cycling.
There is a tendency when looking back to find points of interest and see them in retrospect as a kind of pre-destination. The singer who reflects on her childhood says, “There was always music in my house, I was always singing, in the bathroom, in front of the bedroom mirror with my hairbrush as a microphone…” as though every other kid didn’t do those things too. Hence with Close To Flying we get such vignettes as young Cadel struggling manfully with the wrenches trying to take the training wheels off his first bike. Because he wanted to be (get breathless)…close to flying…
The fact that Cadel didn’t become a bicycle mechanic somewhat bemused me. The sense of pre-destination, the spanners… I guess he got sidetracked.
The book does eventually amble toward his professional cycling career despite the many side-journeys we take. I was just getting to the good bits when I ran out of momentum, put the book down for a bit and here I am months later never having picked it up. You see, it’s not just the heavy handedness of the book, it’s the bafflingly stilted prose. As a rule I can’t read stilted prose unless it’s my own. Here’s an example of Rob Arnold’s (he’s the guy who wrote this thing) work:

On the alcohol front, he’s developed a taste for fine wines and loves a cold beer to quench his thirst but if you’re chasing a scandal prompted by excessive consumption, then turn your attention elsehwhere. Nothing to see here.

Yuck yuck. I’m sorry, but even just re-writing that makes me hurt a little inside. I feel like I should be wearing a polyester shirt and braces when I read that.

The problem with the book is that not a single page goes by without me tripping up on a piece of writing so strangely stilted and inept that I have to read it three times, then sometimes aloud for my wife, wondering all the while at the artlessness of it. I’m a slow reader at the best of times but this book was really dragging me down. It’s not a dense book by any means, a fast reader could knock it over in a day, but I’ve been on it for months and now I’ve ground to a halt. I really don’t think I can go on. I’m just that….close to crying. (Hope you remembered to be breathless, just in your head if you’ve learned to read silently.)

I’m exactly one-third off the way through the book. I’m definitely the lantern rouge of readers and maybe I should let the broom wagon sweep me up. I can’t see myself finishing this book ever. The events are a matter of record, the prose awful, the insights scant and there aren’t nearly enough pictures of Cadel and his wife with their enormous glasses, bored waiters and distracted children, like this one: 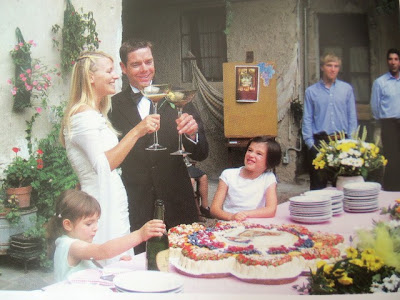