Skip to content
We’re a country girt by sea but filled with idiots and this week a uniquely Australian type of  moron came to international recognition for his profoundly illogical anti-bike sentiments.

Reading Bike Snob NY this week alerted me to the fact that Melbourne’s own Councillor Ken Ong wants to impose a 20km/hr speed limit on cyclist. At first I thought, how stupid. I chuckled at Bike Snobs version of events:

Maybe I’m missing something here, but isn’t the problem that the cyclist ran the red light?  If so, I’m assuming that’s already illegal in Melbourne, which means that no additional legislation is necessary. Really, imposing a speed limit because someone ran a red light is like raising the sales tax to combat shoplifting.

But then I saw what Cr Ong was trying to do for us. He was trying to save us cyclist from ourselves. You know, there’s nothing more dangerous to a cyclist than an enraged driver. They’re all enraged to one degree or another, sure, but once they’re seriously pissed off they’ll do almost anything. Witness Warnie running over that bloke in Prahran. Witness the 4WD moron who tried to run me over. Witness this:

I can’t remember the whole story there, something about the bus driver driving like a moron and the cyclist banging on the door and the bus driver trying to kill him in retribution.

It’s now pretty much an established fact that you can’t go banging on other people’s vehicles unless you’re like being run over. The people who own those vehicles, or in this case the people who drive the vehicles on behalf of the people who own these vehicles, react with a kind of knee-jerk violence that is normally only associated with psychopaths and the Sydney trapdoor spider. A deadly and righteous rage fills them and, conveniently, they’re already behind the wheel of their weapon of choice.

Cr Ong wants to hobble us and emasculate us but he’s doing it for our own good. Once we can no longer travel any faster than the deadbeats in their cars they’ll stop hating us so much and have no reason for killing us so often. Of course, some will kill us just purely by accident but that can’t be helped…except of course by limiting cars to 20km/hr…but that’s never going to happen.

Over at Copenhagenize.com he has some stats of his own that I’m going to re-print and pretend it’s from a reputable source. (Are fellow bloggers a reputable source? This guy makes a living from bicycle advocacy so he must know something right? Please never quote from anything I say. Even I don’t believe half the stuff I write.) 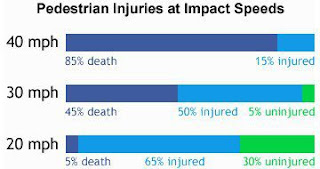 The gist of the stats is that slower cars mean less people killed. Given that cars travel at a minimum of 40km/hr in Australia, and that’s really only in exceptional circumstances, say 3,000 inattentive kids spilling out of a school all at the same time, then we’re mostly traveling in the 50% or greater chance of killing zone. Even in a school zone we’re traveling above 20mph so obviously we’re prepared to kill of a few kiddies in the name of progress.

But I’m digressing there. Who cares how many people are killed or maimed by cars? The real point here is that if even one person might very nearly almost quite possibly get hurt by a bicyclist then we need a major crack down, possible one that involves a task force and special bulletins from the PM. But since we have some stats in front of us about cars, let’s take a moment and ponder on what they might mean for the average cyclist. If a car travelling at 20mph (about 25km/hr) can only kill about 5% of the people it runs into then what will a bicyclist, weighing in at 1/10th the weight of the smallest car, do when it hits someone? Quite likely this: rebound.

Last time I ran into someone, in Melbourne not far from where Cr Ong nearly got bumped into, it did nothing except teach this young woman something about alighting from cars in stationary traffic. Just because the cars are in gridlock doesn’t mean the bikes are. Lucky for her it was a 10kg bike with a 70kg rider, not the combined 200kg + mass of a motorcyclist. Lesson learned I would hope. Quite painless too.

Let’s hope that Cr Ong’s lesson in the stupidity and futility of meaningless traffic laws in just as painless. If not for him then at least for us.