Skip to content
Sorry to all my readers who haven’t caught up with Get Smart re-re-re-re-re-re-runs on a wet Saturday afternoon. The title of this blog is of course an allusion to KAOS’ Vice President of Public Relations and Terror Ludwig Siegfried because he shares a name with the following single speeder (and I’ve certainly relied on more tenuous links than that before).
The bike:

The pictures kinda chopped off at the bottom because Siegfried’s friends have one of those annoying websites you can’t save images from. What’s wrong with these people, they have problems with bloggers stealing their intellectual property or something?

Siegfried is made of triple butted aluminium tubes. Yes, aluminium! Just when I thought steel had been mandated by some international body as the only material for fixies, along comes one made from the same stuff as our beer cans. Awesome. Vive la Différence. (That’s French for, “Like whatever man.”)
What really separates Siegfried from his friends (apart from his barking German voice, “Starker, we do not freewheel here at KAOS!”) is his Gates Carbon Drive. Check it out: 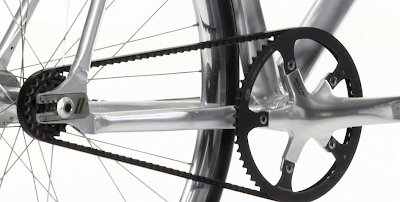 When I first heard about Gates Carbon Drives some years back I was pretty excited. No chain, no lube, no mess…sign me up! But I’ve read enough on the internet now to make me wary. Sounds like they often work flawlessly but there are enough people having a whinge about them on the internet to make me believe they can sometimes lead to an endless series of workshop fiddles trying to get them to be perfect. Perfection is an allusive notion and  I’m convinced I’d be one of the few who had problems…or at least perceived problems. Imagining problems that don’t exist is just the sort of thing that can break my ride nirvana, so I prefer not to go there. Oh, I can’t afford one. That too.
The Blue Globe website promises you that they’re “absolutely maintenance-free”. I’ll choose to believe that because it’s a wonderful concept and I certainly have no proof to the contrary. (And if you want informed opinion instead of mindless conjecture, you’re already on the internet, go google it.)
Siegfried has a friend called Victor too. 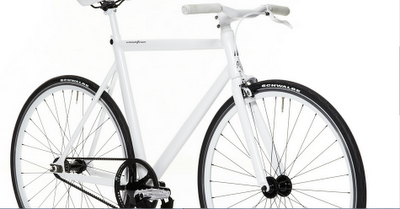