Skip to content
People always want to imagine they’re more interesting than they are. Take me, I’m terribly dull but that doesn’t stop me filling acres of virtual space with my nonsense about bicycles.

And everyone wants to be an “individual”. You know, like everyone else. But what we do mostly when we try and be different is swap one big culture for a smaller sub-culture. We express our uniqueness by dressing and acting like everyone else in our chosen sub-set.

Even the rich and famous are not exempt. I heard some singer (sorry, I don’t know who, but I can assure you she was plenty famous, but it’s been about 30 years since I last cared about anyone in the top 40, so my interest in top 40 kinda waned with Countdown) telling the interviewer last week that her songs “expressed her individuality”. Really? I guess they do. It just sounds kind of grasping and needy when you have to say it. My blog expresses my individuality, the only difference being that I don’t pretend to have written it, I’ve commissioned a team ex-spammers in Nigeria via Freelancer to do it for me .

One way to express your individualism is via your mode of transport. When once we all walked everyone  walked in pretty much the same way and then we got on and off the same buses and trains in more or less the same way. But once we got cars many of us could not resist the call to customize. There are now entire television shows dedicated to this meaningless and pointless pursuit which just proves over and again there’s no idea too stupid that a car owner won’t embrace it. There’s even a blog dedicated to Stupid Looking Cars. 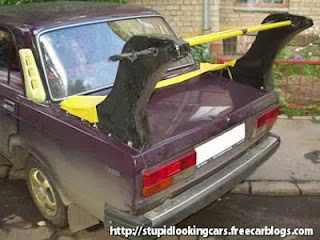 I love a massive rear spoiler. Nothing better shows the gulf between what the car/driver is capable of  and what the driver actually thinks they’re capable of than a massive rear spoiler. Nothing better tells the world of their misunderstanding of physics and aesthetics. Spoiler are a way of advertising to the world what a shallow and meagre self-image you have, that you’re dim-witted and confused. And spoilers are very popular.

Of course, nothing can belittle car drivers in quite the way car advertising does. My favorite car advertising slogan is, “It’s a Jeep thing.” To which I always think, “What? Being a complete wanker?” Every time I see someone in a Jeep doing something really stupid (you know, like 2-3 times every week) I think to myself, “It’s a Jeep thing.” But at least the people who buy these big square urban assault vehicles get to express their individuality. You know, like everyone else who owns one. They’re tell us they’re outgoing, outdoorsy and original. Of course, what we’re hearing is they’re cringing, self-centered, shallow and egotistical. They’re also afraid to compete on the road under the same conditions as normal cars driver so they buy a vehicle twice the size of what they need. They’re scared and pathetic. It’s a  Jeep thing.

In general car adverts will show you a world you can never belong to. Advertising is about aspiration, that’s cool, but in the world of cars it’s like they’ve invented another planet, where traffic disappears and city roads roll out effortlessly into a country playground. And always the cars are inspired by F1. As though a handful of gits flying around a track at lightspeed could have anything to do with stop-start traffic. And all the car ads are telling you how you’ll be a better and more unique and important person if you just buy one of the two million Ford Generics they’ve sold this year.

Of course, my favorite ad is by Jeep. It’s the one where the husband asks his wife what she bought (like he had nothing to do with the decision because men hate shopping for cars…) and the daft bitch tells him she bought a Jeep. A Jeep? Yes, a Jeep. And he gives her that smugs smile and turns away as if to say, “Thank Odin I spoke to the divorce lawyers this morning.”


And then the Potbelleez song kicks in with the lyrics, “Is there anyone out there feeling something?” because he’s trapped in a loveless marriage with a woman who thinks she needs a fucking Jeep to cart the kids to and from their private schools and violin lessons.

But at least she’s expressed something of her individuality. Otherwise she’d just be another middle-class mum stuck in the suburbs. And wouldn’t that be simply awful?

The Census. Apparently it’s considered funny and a little orginal to answer “Jedi” as your religion. You know, like all the other funny, ill-informed prats out there. One in our group last night admitted that she’d done this as a callow uni student and insisted that there had been a spike in statistics for jediism in her area, a uni town in England. I’m not sure how the Poms treat this issue but here in Australia we relegate all Jedis to the bin of stupidity, or in ABS’s more dimplomatic language: Answers such as Jedi and others which have not to this point in time been identified as a religion in the classification will be coded to the one category”not defined”. Which is to say, they ignore you. Which is pretty much what happens when someone shows me a new tattoo with inspirational words from their favorite pop stars (which are a mis-quoting of Neitchze or Sun Tzu or someone else they’ve never heard of).

It’s so hard to find that one tattoo that truly defines us as individuals. 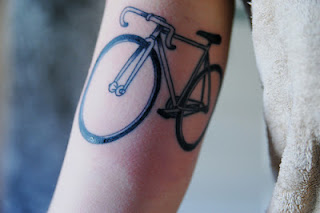 That’s why you should get your whole body done. 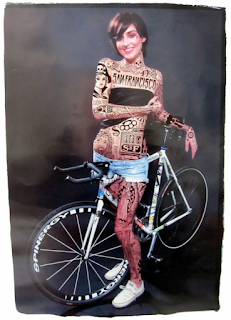 Surprisingly, if you google “jedi fixie” in Google images you get quite a few from my blog, which means I must bang on about jedis too much and that I have inadvertently had the kind of statistical impact that those who answer “jedi” on their Census wanted to have. I told you my blog was an expression of my individuality. I’ll have to double my Nigerian’s wages. They can have $2 a day.

One person in our group last night insisted that she was a pagan. I’ve been through this before because the person in question is our housemate. It would be true to say that in the year and a half we’ve shared house I’ve never witnessed a pagan ritual or any kind of pagan worship. She’s never even muttered, “In the name of Odin!” instead of “For fucks sake,” when she’s angry. (To be honest she doesn’t get angry very often, being altogether of much sweeter temperament than me.) And I find it hard to believe that despite her reading of some excellent scientific literature she actually believes thunder is made by a god called “Thor”. I don’t want to say too much about her paganism in fear of offending her imaginary belief system but it would seem to me that the main point of this paganism is that inventing an interest in a religion you don’t actually have is just another way of saying, “I’m original and special.” Or maybe it’s just a way to stimulate an argument over beer and pizza. Whatever.

Of course, what makes me special is just how normal I am. I’m not even an especially good cyclist or especially knowledgeable about bikes. It would be easy to assume that just because I write so many words about bikes that I actually knew something about them. Sorry, but what you get with me is the “everyman” point of view.

Even my bike is unremarkable. I acquired some flash wheels for it recently so it now stands out in a crowd of bikes but until then it possessed and almost sleep-inducing dullness. I love it that people take such great care with curating their special fixie that so precisely reflects who they are. I do. But sadly I’ve probably inadvertently done that by creating such a dull bike and now my belated attempts to jazz it up are probably a little dishonest. People might see my bike and assume someone interesting rides it. I might get my opinion sought on topics I have no interest or knowledge on. The way people do with sports stars. As though the ability to swim up and down a pool like an automaton made you a more interesting or knowledgeable person. But at least I haven’t lapsed too generously into cliche. You know, like this sort of thing: 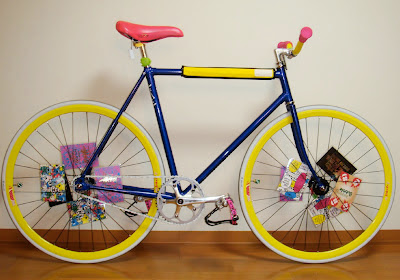 Really people, if you haven’t already done the cards in the spokes things it’s too late. And if you do have cards in your spokes, take them out. It’s embarrassing. Unless you’re prepared to go OTT, in which case it becomes okay again: 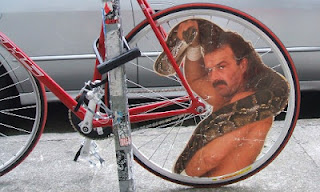 That’s harnessing a whole new power of awesome. But in general cards in spokes are right up there with top tube protectors and really tiny handlebars as the most embarrassing fixie trends and all you’re doing is making it hard for the rest of us. We’re trying to find our special niche in society and we’ve got that fixie thing happening for us and you come along with cards in your spokes and a goofy hat making us all look like gits. Tone it down a bit please.

The problem with so many of these things is you get on board thinking you’re clever and unique but then you don’t know when is the tipping point when too many people have joined you and now it’s daggy and cliched. Take Chuck Norris as an example. It’s no longer cool to make Chuck Norris jokes. The whole “Chuck Norris has a basement in his treehouse” thing was clever and funny but is now just a bit embarrassing. The tipping point was recent but it’s gone. Let it go. Let go of your top tube and spoke cards while you’re at it.

A few embarrassing cliches aside, one thing about the fixie thing is that it’s been a bit hard for those who would like to deride it to properly define it. So they inevitably fall back on some cliches that have been repeated so often people just generally accept they’re true.  Apparently we’re all hipsters. It’s probably true that many of us are at the bleeding edge of fashion, as are the hipsters, but I’ve never seen dudes like this on fixies: 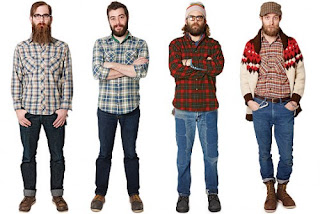 But maybe that’s because I live in the cloistered suburbs of the Gold Coast. It is, for instance, too hot to dress like this ten months of the year. Apart from anything else, fixie dudes dress like young people. You know, because they are. And some young dudes is pretty hip.

There are probably kids who want to find their new identity within the fixie sub-subculture and they get their first bike in years and remove the brakes even though they’re barely competent riders…but this doesn’t seem to worry the people who want to revile our great movement. Of course, those same people have moved on to confidently predicting the end of the fixie scene so maybe one day soon all the young folk will get back in their cars with big spoilers and everyone will be happy again.

The last word on this issue goes to Mark “Jacko” Jackson. His gem from 1985 not only defined just how mad you had to be in order to be genuinely original, it also featured some of the worst dancing ever in a music video ever. Did I say ever.