Skip to content
I’ve been riding fixed for a good couple month now so I should notice a reduction in my maintenance right? I mean, it’s one of the top reasons we get fixed isn’t it? (You know, apart from being cool and wearing the pants rolled up and all that?)

Hardcore fixie dude in understated almost bored voice: “Yeah sure, I had to go fixed because I kept wearing out too many brake pads and it was costing me a  fortune in maintenance on the gears.”

When I came over to single speeding my maintenance schedules didn’t actually reduce too much…but the way my bike reacted to my maintenance schedule improved massively. I discovered the joys of a bike that thrived without regular maintenance. My bike karma jumped by ten points (that’s a lot of karma points in case you didn’t know) and I’ve never looked back (except to check on traffic behind me of course…).

It was a long time before I was tempted to go fixed but I was hoping that I’d be able to turn my bicycle neglect up yet another notch when I did. It was when I discovered my brake pads were down to metal and the callipers had seized that I went over to the dark side. No need for brakes on a fixie (at least in theory, I was notoriously slow in adapting to riding fixed).

The problem is I’ve developed some creaks. Now, my drive train will generally cope with the force from my legs stomping on the pedals (though the pedals may laugh at my use of the term stomping), though as you can see from this picture below of my legs I can generate some serious wattage when required: 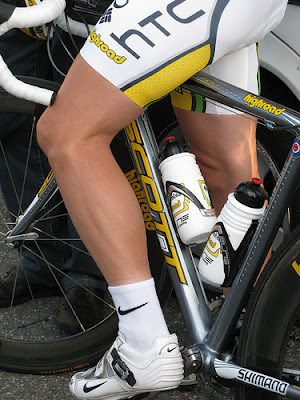 Similarities between my legs and Mark Cavendish’ legs aside, my drive train was coping nicely with my day-to-day riding. I’d installed a Shimano bottom bracket and an orange chain (I don’t know if that makes it better but it matches the orange grips and the orange wheels) and had recently replaced my ailing freewheel care of some new wheels from Reid. I thought I was ready for a period of maintenance and creak free grace from my bike. And then noises emerged from the bottom bracket area.

The first thing I did was tighten the bolts on the crank arms. My mountain bikes have sported all sorts of strange bottom bracket arrangements for years now, external bearings with cranks with big holes from one end to another (and yes, we did all get on our hands and knees to stare through that strange hole when they first came out), and crazy splined arrangements that made engagement and longevity almost infinite (or anywhere up to six months), even with the abuse of mountain biking. Coming back down to earth…the square taper bottom brackets found on affordable fixies and vintage bikes was a real come down. They’re fine so long as you keep the bolts tight and don’t abuse them too much…abuse them too much? Yes, using your drive chain as a braking system is just the kind of abuse they don’t really cope with.

Let’s say I can generate about 800 watts of power when I’m sprinting down the Champs-Elysee (or substitute any comparable avenue of the Gold Coast, for which we’re justly world famous). We’re being generous I know but go with me. Let’s say I can produce 800 watts of power…and the drive train copes with that. But then I start slamming on the pedals as brakes and transferring all the momentum of bike, rider and (usually totally chockers) BO Gear Chunky Toad through the drive train. By locking out my legs and bracing against the handlebars I’m transferring one hell of a lot more energy through my drive train than ever it had to cope with during my ineffectual pedalling. And that’s the problem with riding fixed.

So now I’ve got this nasty creaking noise in my bottom bracket and I’m pretty sure I’m going to have to replace it. It’s a Shimano bottom bracket, not the regular VP stuff you get on cheap fixies (having already worn out a couple of those) and I really expected a couple years out of this fella. The other thing I noticed was how loose my chain had become in a short period. Obviously it too was suffering from the fixed treatment.

Given all that, I would think it would be better replace my brake pads occasionally (read: when they get down to the metal) than replace my chain and bottom bracket at regular intervals. Riding fixed is fun, no doubting that, but at least in terms of maintenance I’m saying that single speeds have an advantage.