Skip to content
Endomondo gave its app a facelift recently and it now looks and works better than ever. The front page of the app has been simplified and cleaned up and there’s a big play button to start it. Bit foolproof really.

Apart from the cosmetics everything works just like it used to. It’s amazing to have such information at my finger-tips and really a dream come true for cycling geeks. The GPS tracks your every move and once home uploads it to the Endomono site so you get this kind of detail: 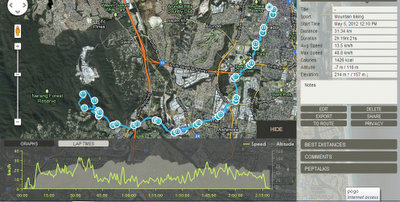 As you can see, every details of my ride is rendered onto Google Maps in exacting detail. There’s hardly a ride goes by when I don’t try to bore someone (read: my wife) with the details or my amazement that such a great bicycle GPS is available to me free of charge.
The problem is I’m having a love hate relationship with Endomondo. The fault doesn’t really lie with the app. The problem with Endomondo and other phone based GPS apps is the phone.
I’ve made no secret of my distaste for my Samsung Galaxy S2. It locks up and has one of those bloody stupid touch screen (try using them with sweaty fingers) and generally has a flat battery any time you want to use it. My phone is primarily a work utility and a phone with a pathetic battery life and cumbersome texting is a drag (and for all of you people who reckon they can text quickly on a touch screen I say, “COME ON!” You’re kidding yourselves or you have way more patience than I do). I now own a base-model Blackberry that doesn’t have GPS but I’ve reserved the Samsung for the things it’s good at, like playing music and running bicycle GPS apps. Even so, it’s hard to keep the bloody thing topped up enough for a ride.
The thing with the GPS is it eats batteries like fat kids eat donuts (or doughnuts if you’re the kind of person who likes feeling smug and superior because they know how to spell things the same way our Pommy forebears did). My Samsung phone has awful battery life but it was on par with numerous HTCs and iPhones I’ve used (on par…as in, slightly worse but still in the same ball park). So unless you have a full charge you can’t actually get a full ride in without losing all power. And if you’re out mountain biking by yourself and you have a phone and you have an accident and the phone is flat because you’re vain and stupid and you like recording your rides to bore your wife with later…well you’d look like a knob wouldn’t you?
The other problem with phone-based GPS is they sometimes refuse to work because they can’t find the satellites. Or they kick in halfway through the ride. Or they record anomalies (like when I did 4kms in 2 minutes, which I’m prepared to believe but wonder now how I got overlooked for the Olympics). You get the idea. They find a new way of fucking up every second ride or so.
What happens is I drag out the Endomondo GPS app every now and then but hardly record every ride because it’s not worth the hassle. Thing is, when I do actually use it I love it.