Skip to content
When you’re riding someone else’ bike you can do one of two things. One is treat it with the kind of care and respect you would want from someone who borrowed your bike. The other is thrash it. It’s not like it’s your bike so hey, go nuts.My official policy is to treat bikes in my care with proper respect, not like my poor long suffering Mojo which gets ridden rail hail or shine. So there are some places I can’t take these bikes. Beach is one. Riding past the beach, sure. Leaning it against a post at the foreshore for hours during a howling onshore gale while I flail away optimistically in washing-machine surf…not so good (for anyone really, but unfortunately I’m still stupid enough to give it a go occasional).

I have however been making excuses to ride the Corsa. In the first week I had it I accumulated well over 100 kms of commute, with just the one longer ride thrown in. 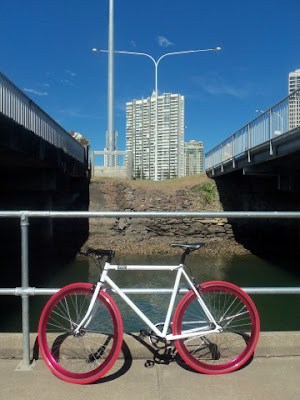 It’s because it’s a genuinely lovely ride. The ride quality on the Corsa from Single Speed Cycles really does set it apart. If you want smooth, apply here. I reviewed the Corsa last year and was impressed with the smooth ride back then but I must have forgotten just how lovely it was because I really wasn’t expecting this level of smooth. It’s…smooth. (There’s no thesaurus in Blogger.)

What makes one bike so much smoother than another? It’s not the steel frame because I’ve ridden plenty of steel fixies that don’t compare. It’s not just the curve of the fork (though I’m sure that’s a big part of it) because my 80’s vintage Peugeot has a straight blade fork and is similarly as smooth as the Corsa. I believe it’s a combination of design, materials and a little voodoo.

The single speed market is a little obsessed with steel bikes. It’s hard to find a fixie on the market not made of steel but you have  to wonder why we’re all using steel if we’re not taking advantage of its properties. That is, if a bike rides like an aluminium bike then why not make it out of aluminium? The Corsa is a great exception and shows just what lovely rides steel bikes can be. I’ve harped on often enough before about what abomination hybrids are, with their silly suspension seats and bouncy front forks, and this bike shows exactly why their complexity is superfluous. Because it’s so…fuck it…smooth. (Anyone got a thesaurus?) 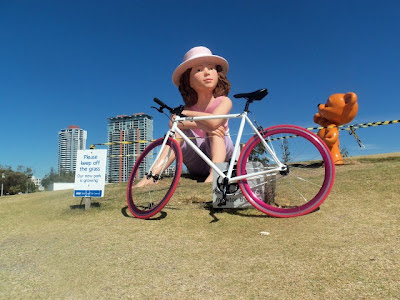 The good thing about the Corsa is it also offers a lively ride. The wheelbase feels longer than my small sized Mojo but it still feels nimble enough to take on city traffic. I had to adjust my position on the bike when cornering (as compared with the Mojo) but once I found the spot where the bike wanted me there was no wallow or dive in the corners. The geometry is stable but not slow. It’s a very even tempered and confidence inspiring bike. Things like the occasional foray onto gravel are well within its grasp. I had to ride a steep grassy embankment to overtake some pedestrians and the bike came back down in a controlled two wheel slide off the embankment with no concerns. It’s the sort of thing you do on a bike you’re comfortable with. The 80s vintage Peugeot I mentioned before never inspired confidence and I’ll be buggered if I’m going to test it with steep embankments.

If you’ve read any of my reviews before you’ll know I’m not real fond of narrow bars. And the Corsa has some very narrow bars. It’s what fixies have, sure, but I struggle with it because I’m kinda old and set in my ways. At least with the Corsa the steering and cornering were confidence inspiring with or without narrow bars. It was climbing where I struggled. When you only have one gear the extra leverage from some wider bars can help you get up those nasty short pinches. I’m still yet to find the technique that gets me up those climbs properly. I tried with straight arms pulling against the bars, then bent arms trying to muscle it up the hill and then with a kind of bobbing stair-master like climbing action, trying to pump the pedals with a very leggy action and no arms involved. But my legs aren’t built for that. I need to share the chores around when it comes to hills.

And the gearing is quite tall. I say this on every bike I test but I have recently increased the gearing on my own bike and thought I’d learned to be a man. Apparently not. Riding this bike I realised just how many things I’ve failed at in the fixie realm. I can’t do a decent fixed skid, I’m struggling with narrow bars and my skinny legs can’t get me over a hill.

Headwinds were a chore for me. Riding home today I was pushing pretty hard to get a 70rpm pedalling cadence going. My comfortable range starts at about 90rpm (and ends at roughly 100rpm…) so I was feeling the cartilage in the knees trying to pop out of their joints. The gearing is a 46×18 so it’s the same as pretty much every other bike sold in this category. If you’re thinking, gee I don’t like tall gearing and I might look elsewhere then forget it. Man up goddamnit. (Yeah, I think that’s me I’m talking to.)

I would of course change the front ring and knock it down a gear or two if the bike was mine. Simple fix. I’ve changed the gearing on the Mojo about five times already so it’s not something I’m unduly worried about. In fact, riding the bike often had me thinking about what I would change if the bike was mine. There is something about the character of the bike, that smooth 80s vintage roadster feel, that made me want to craft one in my own image. I don’t do drop bars very often but I would love to see some drop bars on this bike. Drop the gearing too. Make it a Sunday arvo beach ride. Something for a 40-60km run down to Burleigh return. It might seem contradictory but good bikes often make me daydream about what I’d do to make them better, or at the very  least more “mine”.

Like anyone else who ever owned a single speed or fixie I’ve always wondered what sort of bike I would get if I had an unlimited budget. I’d go totally gourmet on the frame of course, enlist a custom frame maker, waste endless hours discussing which braze-ons I wanted and what colours and whether the lugs should be cut away into little flame shapes or not. But I might just take along a Corsa and say, “This is the ride quality I want.” Importantly, the steel tubes on my gourmet bike would have some numbers on them, Reynolds 953 or something from Columbus, but apart from boasting  rights and being a bit lighter the bike might feel about the same as the Corsa when I rode it (unless frame makers really can inject some kind of magic into a hand crafted frame). Riding the Corsa often makes you feel like you’re riding something a bit gourmet. It’s a sweet ride.

Okay, so the reason we’re revisiting the Corsa is because the mob have spoken to Single Speeed Cycles and Single Speed Cycles have listened and has adjusted the bike accordingly. The previous incarnation had a quill stem and some bent bars. I kinda liked the quill stem because it gave the bike a vintage feel. The contra argument to that is it made the bike feel old fashioned. Perhaps. I’m not convinced. I must say though, there was a reason why the modern headset was invented and it’s because mountain bikers wanted something stronger and better than what they’d inherited from roadies. There are advantages to the older headsets (like being able to raise or lower it) but in general pretty much every bike of substance has adopted the threadless headset and they’re obviously a better design. Whether that matters depends on how hard you’re thrashing your bike or whether you want to look like you’re riding something old and funky or cutting edge. If you’re like me and don’t care too much either way then you win regardless.

What I can say is the reach now feels just about spot on. I reckon I commented on the long reach last time round. You were drawn out into something of a racers crouch with the old set-up and now it’s an efficient though comfortable position, just about right for commuting or some longer rides like my dawdle down to Burleigh.

The bars are seriously narrow though. (Update. I now run narrow bars and wonder what all the fuss I was making back when I wrote this.) I measured them against some drop bars that are knocking about the shed and the Corsa’s bars are narrower. Only by a fraction though, which shows you why the drop bars are kicking round the shed and not hanging on a bike (ie, because I really do  like wide bars). So they’re not unreasonably narrow but with drop bars you can get your hands onto the hoods for a bit more leverage when hill climbing. As I said before, I struggled on the hills with the Corsa and I’d be getting some wide bars if I owned it. (Yeah, I really doubt that now.)

What the bars do tell you is that this bike is a bike cut in the mould of a proper fixie, not a softer single speeder option (like I’m obviously all too familiar with). The other thing that backs up this claim is the pearly white frame and those very bold red wheels. 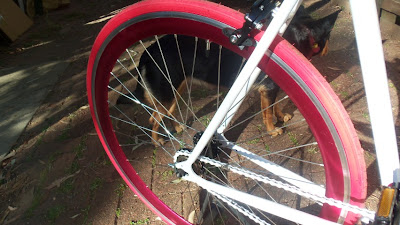 I got a few unsolicited comments while riding this bike, from the bogans who called me a fashion victim to the guy in the car who gave a low whistle (presumably for the bike and not me!). The wheels look amazing in the flesh and changed colours depending on what light they’re in. Against the pearly white frame they contrast beautifully and really make the bike stand apart from other similar fixies on the market.
Again, riding this bike I was given cause to reflect on how bikes that look roughly the same (at least to the untrained eye) and have so much in common can be so different when you ride them. What I liked most about the Corsa was how different it was from those other bikes. It sets itself apart in ride quality, look and configuration. I won’t ever be placed in a position where I have to pick a winner in a field this diverse because it really comes down to what you want from the bike you buy. For many, the Corsa will be the perfect ride. It deserves to find many friends because it really is a lovely a ride.