Skip to content
When I saw the Taga stroller, bike, cargo bike thingo in Treadlie magazine I had to go in for a closer look. 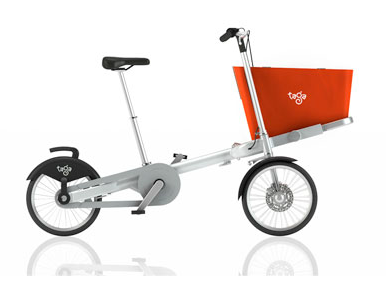 This weird looking cargo bike will do a bunch of transformations, from baby bike: 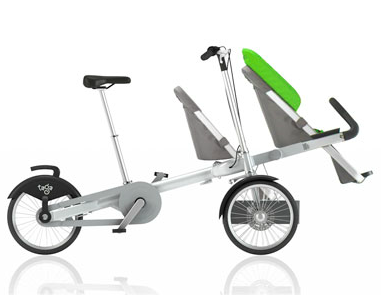 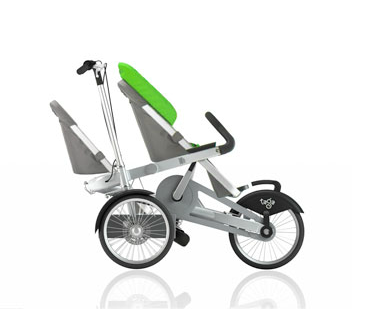 And more besides. I don’t personally own any babies but I’m sure this Taga thingo this would be useful if I did.
What I really loved about the Taga though was the video.

I like to think there exists a universe where riding along without a helmet talking on your mobile phone is symbolic of a carefree existence rather than something on the same level as genocide or watching that thing  about Lara Bingle on TV. It’s just that I don’t live in that world. 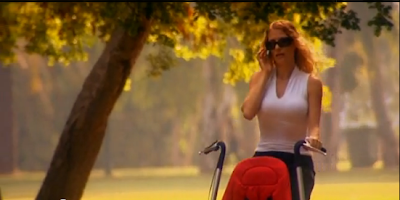 Do this in Australia and some guy in an un-roadworthy vehicle with a cigarette dangling from his mouth will feel at liberty to hold up two lanes of traffic as he leans across to the passenger side window and berates you about road laws. Saintly and pious old ladies will give you filthy  looks and report you to the police. Ordinary people will become enraged and, having no direct outlet, start taking it out on each other. The community will get uptight and discontent will grow. We’ll start worrying about everyone who is  difference to ourselves and make outrageous claims likening cycling to bestiality, foreigners to devil worshipers, and…in the ensuing war the entire planet will be wiped out.
That’s how I know these bikes come from a different universe, by the fact that I’m still here writing this rubbish and you’re out there (wondering why you’re) reading it.
I spoke to a copper the other day about bikes. He’s not real keen on booking cyclists and neither are his copper mates. From any objective point of view it’s a trivial and stupid thing to do,  unless the cyclist is really doing something quite stupid. Problem is, people report the coppers for not reporting the bikes. They note down the police vehicles number and then personally report the car for not reporting the bike. The poor copper has a strike against him now and has to book every bike he sees for the next week (and let’s face it, pretty much every bike you see is doing something wrong).
My question is, why, with cars having rego plates and all, aren’t people doing the same for every fuckwit that does something really dangerously stupid in a car? I’ve tried doing burn-outs on a bike and it’s not particularly effective nor likely to spin out of control and hurt people. Some guys (Commodore ute owners, this is you) can’t get through a single set of light without bagging it up. I rarely get above 60km//hr on my bike but most other vehicles spend half their time speeding. Not that a speeding cyclist would be a big problem. My high-school physics teacher taught me that momentum is mass x velocity. So a car doing 80 has a big fucking momentum and a bike doing 45 has very little. In other word, lets just say a cyclist does somehow bag it up at the lights, spins out of control and hurtles toward a group of pedestrians (in this universe, not the parallel one, because I’m not sure of the physics of that universe), and the rider isn’t nimble or quick witted enough to dodge the people standing there. Just how much damage they gonna do anyway?
Perhaps there does exist a place where people ignore you as you ride a vehicle up the footpath wide enough to be a small car. 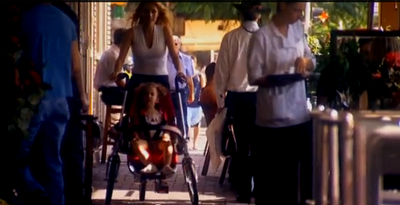 I’ve certainly been abused for less. But I’ve never pinned a small child to the front of my bike and maybe that’s what’s been missing.
I have friends who will testify that taking small people on bikes in tantamount to child abuse. The dangers of cycling are unacceptable for babies, especially if you add a baby caboose or something even wider… They don’t live anywhere with decent bike lanes (nor tolerant or well mannered drivers) so I can certainly see their point. I would like to think that short journeys could be undertaken from where I live without the interventionism of DOCS. Admittedly I couldn’t get any further than Southport because the major bridge that joins one side of Gold Coast to the other just isn’t wide enough to accommodate a Taga. It barely accommodates a small bike trailer and is hard enough with the Carver surf rack attached. But short journeys within a limited range along the one solitary bike path decent enough for a Taga would get me to a major shopping centre with chemist, a hospital, a diaper dispensary and all the other things a parent could need.
I can see how a bike that converts to a baby stroller would be handy. The advantages of being able to convert your bicycle to something you can wheel into a store are obvious. Never carry a bike lock again. Though to be fair babies are more inconvenient than bike locks, so it’s something of a trade off.
The Taga looks like a great piece of engineering and it’s way too clever by half. The utility of this device is hard to argue against.  Just supposing I had children (you know, like maybe they passed a new law) and am teleported to a different universe where it could be used, then I’d be one of the first to line up  for one.