Skip to content
For many of us who grew up in the 70s and 80s David Byrne was sucked into a giant black hole after leaving everybody’s favourite  new wave band Talking Heads. 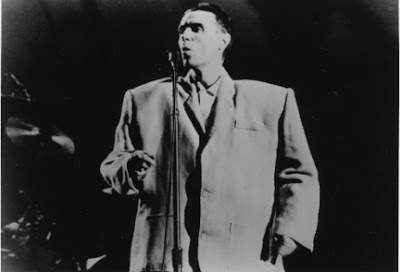 Talking Heads were incredibly popular because they not only had an easy pop sensibility but they had an artsy feel that made people believe they weren’t “mainstream”. In that way they filled the same niche that REM filled later on, the mainstream mans alternative, or ELO with guitars as I once heard the Ghost describe them. It’s an important niche for many who want to feel a little artsy and tell friends they’re into indie music and who want to “discover” a band, but who inevitably discover them  as they begin their rise to fame and retrospectively claim the last six years of that band’s development.
As one door opens another closes. And so as the pop smitten girl with the dreamy eyes discovers the “indie” band the hardened cynical music fan dumps them for becoming too mainstream and tells people pompously that, “I only like their early stuff.”
David Byrne has of course had a busy creative life since leaving Talking Heads. But that needn’t concern us here. All we  need to do is pull out our old Talking Heads albums and say, “They were a great band,” and other stuff like, “There are no bands out there like this any more” and generally decry the lack of creative expression in modern music. “It’s all produced in the studio for people with no talent…” etc.
Of course every generation thinks it has a strangle-hold on creativity and the next generation are a bunch of worthless lazy dullards, unaware that the crap they listened to as a kid is still dominating airwaves and forcing all the new music off the air.
In the 80s pop music was distilled down to raw sugar and we enjoyed a decade of music that rotted our cultural and artistic teeth back to the stumps. And yet people still venerate it and I can’t visit any public place without hearing that same worthless crap I tried so hard to avoid as a child.
No wonder people liked REM.
Getting back to the point. David Byrne hasn’t been sitting on his haunches wearing a wing-shouldered suit for decades. He’s been cycling. And when he’s not cycling he’s creating bicycle racks: 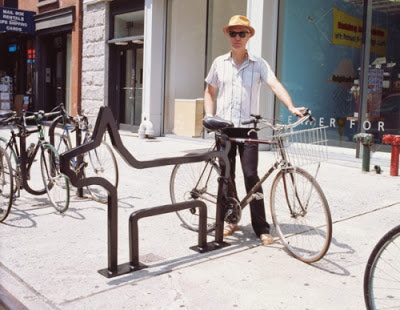 Bryne’s genius was to realise you can lock a bike to pretty much any shape so why not make the shape interesting. Usually bike racks are specifically designed for bikes by people who haven’t ever ridden a bike, and often their convoluted shapes all but precludes locking anything bike-like to the rack. Racks at my local shops require the bike to mount it like a horse trying to couple and then only the lock prevents it from toppling over. At least with a dog rack you can lock your bike without feeling you’re leaving some obscure public obscenity.
Once you’re onto a good thing you can continue in that vein almost indefinitely. Here’s his rack for Wall Street. 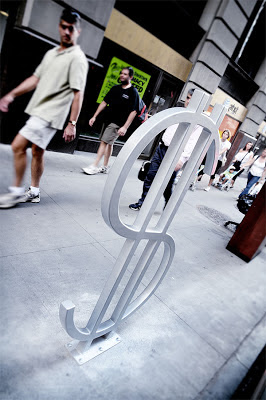 You get the idea. He was going to do one for the local government chambers but you can’t chain your bike to a mound of horse shit.
At least with Byrne’s rack-art installations you get something designed by a cyclist. In most cases the nearest lamppost is more accommodating than the tangled racks provided for bikes.
The reason why David Byrne gets to design these racks is mainly because he’s David Byrne. You and I might design a treble-clef bike rack for the local concert hall but it doesn’t mean anyone is going to give a damn. But David is also a cyclist so at least he has some insight into what a bike can be locked to.
David has also been writing and blogging about bike for decades. I recently acquired his book and thought I might read it and perhaps even offer a few pithy remarks about it. Thing was, the first few pages were astonishingly dull so I gave up. I’ll probably dip back in and see if it picks up momentum but in the meantime, perhaps it was too many episodes of Lowdown, I came up with a headline too good to ignore. And so I’ve used it here. Good day sirs.