Skip to content
To paraphrase William Shakespeare, this shit nearly rides itself. The Divvy Van from Brown Jersey felt almost effortless as I glided along the Gold Coast foreshore and the bike fell into corners just by thinking about them. 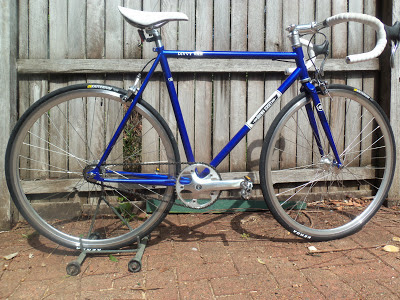 The Divvy Van had a “just right” feel. (I hope Kellogs haven’t trademarked that. I’d hate Brown Jersey to get sued.) Jumping on the bike for the first time it was like the bike was saying, “Welcome home,” and I was swinging the bike comfortably into corners in a way that would suggest we were  already acquainted with each other.
But first, the assembly:


Assembling the Brown Jersey from James Pollock on Vimeo. Shot on Isaw.

Assembly took about ten minutes and required a couple allen keys, a pedal spanner and a 15mm ring spanner. 90% of the assembly time was in the un-wrapping. If this is indicative of how Brown Jersey deliver their goods then I can confidently predict your purchase will arrive to you in good shape and you won’t need to be a mechanic to put it together. Not even a mechanic’s daughter.

Back to the ride. 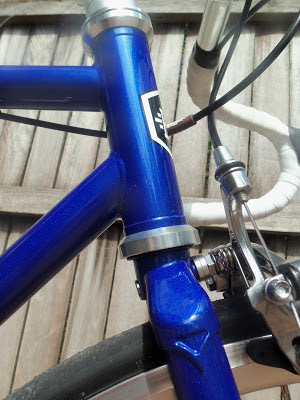 Something that I only noticed after returning to my own bike is that there is no vibration coming through the bars on the Divvy Van. I reckon I’ve got poor circulation or something because on pretty much every bike I’ve ever owned or ridden I get numbness and pins and needles in my hands. I recently changed the old carbon bars on my Mojo for some alu ones and the numbness nearly drove me crazy. I manage it by changing hand position and giving them a rest and a squeeze at regular intervals. I did none of the on the Brown Jersey and I never even felt close to getting numb hands. What I put this down to is a frame that takes away most of the road vibration. It does that while still feeling responsive and lively. It encourages you to get out of the saddle (especially with the drop bars giving your hands a more forward position for climbing) and responds by sprinting up hill. (And by sprinting I mean not-very-fit-guy sprinting…kind of a dawdle really.) 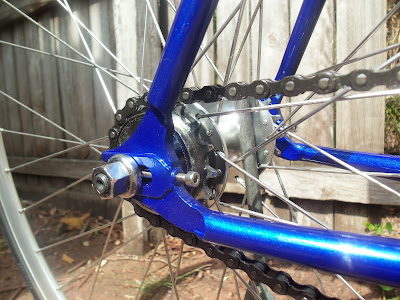 The ride of the bike is refined and comfortable. It has the qualities of good steel. I’ve said many times before that this whole “steel is real” mantra is trite and over-used. Poorly designed steel bikes can be much more abrasive, less lively and whole lot less real than a well designed aluminium bike. In this case the ride is good and makes you aware of what it means to own a bike that has been conceived and built by those who know how to put the real into the steel. It’s double-butted too, which means it took two arseholes to construct it.
The saddle is nothing remarkable but was quickly forgotten, which is its job. I don’t ride with those padded panties favored by proper cyclist so a saddle wants to be decent if my bum is going to be comfortable with it. My bum did not complain.
I was given the choice of bikes from the Brown Jersey and chose the Divvy Van because I’ve seen a few fixie with drop bars and I like the traditional look of it. It’s a funny choice for me though because I know I’ll never use the drops. I barely ever stooped down there in my youth and now I’m advancing in years I really can’t see myself using the drops. They’re there for purely cosmetic reasons, at least when I’m riding it. One thing about the drops though they necessitate the use of road levers and here enters one of my few gripes about the Divvy Van.
The brakes never inspired confidence. The effort required to stop was always more than I was comfortable with. You could lock up the brakes if you really wanted to but I never really felt like the brakes would be there for me when I need them. I know many of you don’t share my obsession with brakes so you can feel free to skip this paragraph. To me the better the brakes the greater the fun because I can ride faster and take more chances knowing I can stop fast when the next moron cuts me off. I never felt that confidence with the Divvy Van and I moderated my riding accordingly. It seemed to me the problem was with the leverage provided by the brake levers and I’d be curious to try the same brakes with levers on a flat bar or bullhorns. Those levers might work better and be a better option if you’re wanting to dodge traffic (and this of course assumes you actually use brakes).
Apart from that I was loving the Divvy Van. There was an impressive level of detail down to the smallest items. The brake cables had a little Brown Jersey embossed cable/frame protector thingy on it where it met the frame. The cranks where nicely polished and have Brown Jersey etched on them. The hubs on the wheels had those nuts that have the spinning washer bit incorporated into them. (You’ll know why this is important if you’ve ever tried to line up a wheel and the washer kept making an arse of itself by getting in the way.) And there were a tidy set of drop-out with guides too.

I’ve enjoyed riding some of the more showy bikes I’ve tested but for me the understated look is the I’d go for if I was buying. I like the idea of owning a bike that only other bike connessiuers will appreciate. If they like the bike they’re pass a test. It shows a certain amount of class. The guy down the road with massive fins on his multi-coloured car, he has no class. He has no way of knowing or judging the qualities of this bike. He can’t pass the test.
I’m glad that bikes like the Brown Jersey’s Divvy Van exist because it’s adding a bit of class to a field already filled with bikes finely honed to their price. The Divvy Van is here to offer a ride for anyone who wants to step out with a little class and doesn’t mind that their less informed mates won’t understand the value in their purchase. If you’re self-assured and bike aware you should take a look at the Divvy Van.