Skip to content
Title get your attention? Yep, got mine. Single Speed Cycles are particularly generous with their give-aways and they’re offering up yet another fixie for people who like them on Facebook. Given the way most people like stuff on Facebook willy-nilly, adding one more like for a chance to win a fixie is an easy decision. 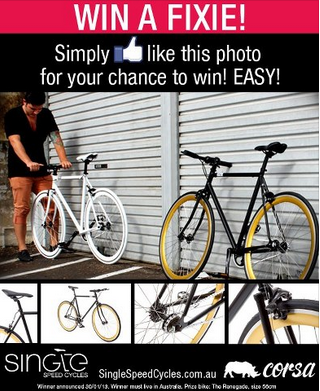 The fixie they’re giving away is the same bike I reviewed here (you’re meant to click on the linky bit). It’s a great bike with a distinctive character.

You  can also win a cruiser with Reid Cycles by joining in their colouring in competition. The best design gets a cruiser and $300 cash. Not sure I’m into cruisers but there’s bucket loads of them blocking the bike paths as they saunter aimlessly along the beaches near me so obviously someone’s digging them. If that includes you (or you just fancy the cash) try clicking on this link. (If nothing happens when you click the link don’t worry, it was probably never meant to be.)

In case we don’t talk again before Christmas, make sure you have a good one and don’t forget to get out and ride. (Here’s a tip, early Christmas morning roads are empty and a ride before Chrissy lunch makes room for more pud.)