Skip to content
Some time back I mentioned that I might have test ride slash short review of the Hasa single speed coming your way. Turns out my friend with said Hasa had bigger and better plans for the bike. In his mind the numbers 520 were special figures and the frame deserved the full treatment.

It’s Reynolds 520 tubing what was used in the frame you see. Now I might get a bit edgy around Reynolds 753 and positively drooly around 853 but  I’m not sure if 520 is going to float  my boat in  the right kinda way. I’m being a bit mean of course because this is a mate’s bike and it’s my duty to run  it down. Reynolds  is Reynolds and even the old 531 with the bent top tube stays  in my shed because I can’t quite bring myself to chucking  it away.

Here’s  a quick peak of the bike and then we’ll get back to bagging it: 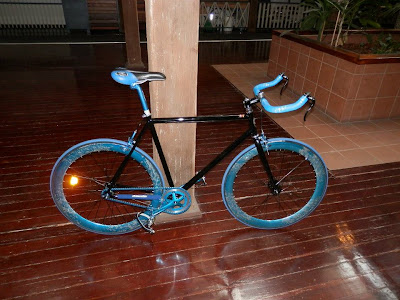 Chris bought the Hasa from Cycling Deal intending to ditch everything bar the frame. Those numbers and the name were the big draw card. I have to admit that I have commented somewhere in this blog about the fact that the Hasa  had proper numbers and  a name attached to it, something about you can’t go too far wrong with a  bike with a Reynolds frame for $250. I don’t know how good Reynolds 520 is but even if  it’s bottom range Reynolds it’s still Reynolds.
The rest of the  Hasa gear was donated  to yours truly, which  is the other reason  I’m find it hard to be  too  hard on the Hasa. Sometimes it pays to have a big shed. I’m not sure what the hell I’m going to do with the Laska cranks and Joytech/Weinneman wheels but they’re mine now and I’m not letting them go so rack off. Right now I’m just one frame  away from making  up another bike. And if there’s one thing my life needs right now it’s another bike… 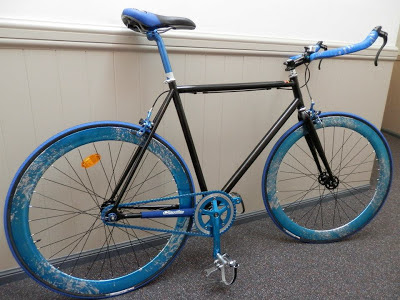 I’m yet to see the bike in the flesh. We missed each other by minutes on the weekend, Chris with his Hasa and  me with my Reid (more on that soon). I know a  little about the bits hanging off it. He spent  about $350 on  parts  that include  carbon fibre bottom bracket, stainless brake cables (you can tell the paucity of details available when I mention the brake cables) and wheels made of blue (or possible made of steel and painted with blue…yes I’m really low on details…).
He’s very happy with the build  (though he did see the Brown Jersey and go a little goo-goo eyed). While there is plenty of bling hanging off it the ride will be all Hasa and I’ll be curious to see how it goes. Will the frame display some class and  will the bike sit in the same  league as the Brown Jersey? We’ll see. 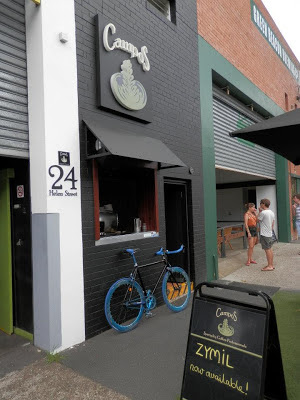