Skip to content
It’s been a quiet time on the Single Speed Gold Coast blog for me lately. It’s mainly been due to other commitments,  such as holidaying, drinking and  eating. There were work commitments too, with a bunch of websites to knock out and the cut-and-thrust of the regular IT that forms my company’s work life.

One of the things that have consumed my time was, ironically, a seminar I presented on blogging. Like a doctor who is fat and smokes I stood up lectured people on blogging and emphasized the importance of regularity. Blogging is like Ford pills, I explained. Or would have if I’d thought of it. Blogging is more like cycling. Especially if you have a bicycle blog.

If you care to bore yourself with the details you can get the full transcript from the blogging seminar here. When I say “full transcript”, it’s not actually a transcript of what I said so much as a record of what I meant to say. Turns out I’m something of a wind up toy when I get started on my favourite topic (fail blogs, but also sometimes blogging) and once I got over some initial nerves I pretty much just raved till everyone’s eyes rolled back in their heads. A couple people walked out toward the end. If I’d been in the audience I might have too.

Not only have I not been blogging but I’ve not been riding a single speed either. (Wasn’t that a delightfully tortuous sentence. I’m sure it makes sense on some level.) Despite having a collection of four bikes with only four gears between them I’ve been out on a bike with…like…heaps of gears. Someone how many and I had to confess I didn’t know. I run out of fingers before I’ve finished counting them all. I’ve got myself a Reid Falco and I’m knocking out the big miles trying to find some form before soccer season starts. When I say “big miles” I am of course referring to the amount of miles you can travel in 1.5hrs through hilly terrain. But when you compare this training to whatever training the rest of the team is doing it does generally look impressively committed. But if you’re a proper cyclist it looks disturbing like I should have stayed home and tried stuffing my mouth with coke and Mentos.

I will be doing a full review of the Reid Falco at some stage, and by full review you know I mean my usual rambling discourse with petty observations and childish attempts at humour. So prepare yourself for a bike with gears. 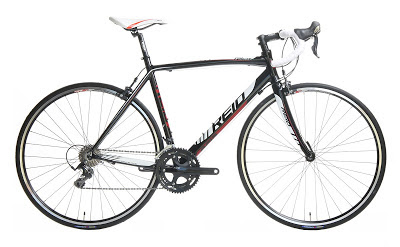