I also have friends who say they read the blog. But that’s another story.

My friend Jamie took the time to comment on something he’d read recently. I’m kinda preaching to the converted on this blog and it would be good to get a dissenting voice every now and then. That’s Jamie. Thanks Jamie. (Someone once commented “this sucks” which was so succinct and possibly accurate that I still cherish it as some of the most honest feedback I’ve had to date.)

Jamie’s comment was that “motard” is taken. Motard was my half motor-vehicle, half tard proposed in a rant last week. He’s suggesting instead cartard, the half car half half-wit. I think it’s a keeper. What you reckon?

He also took me to task on the behavior of some cyclist:

I’m sorry if  he comes across as being semi-literate. He’s a cartard you see. (It’s all right, Jamie deserves this. He’s the one who branded me a wheatard because I’m gluten intolerant.)

My response to this was to point out that while driving a car you’re frustrated by some moron on a bike once every now and then. On a bike some fuck-wit cartard spoils your day every couple minutes.

Let’s take last night’s right as a for instance. It was wet, a signal for some to drive more cautiously, for others to bag it up big time. Three cars went past me moving sideways. Fuck them if they think they’re in control when I’m out there and I’m vulnerable and I don’t want these cartards testing boundaries on the same road as me. One guy in a V8 waited till get got up just behind me and gunned the living shit out of that thing. Pistons should have been popping through his bonnet. For starters I nearly shat my pants. Then I watched him slide past me with the tail of his car sliding toward me and away again. Fuck head. Then there was the guy at the lights who couldn’t bother indicating for me. No worries fuck head. I was waiting politely for you but you couldn’t return the favour. Fuck you too. The cartard that had to race me to the intersection and then jam on the brakes. Fuck you. And the two cartards who overtook me on a fast downhill, squeezing me out of the lane. Even though I was already do 70 in a 60 zone. In the rain. And the dark. Fuck you guys very much too. And the arsehole who wanted me in the bike lane (fucking bike lane full of parked cars, as if I’m going to swerve in and out of traffic on a dark and wet night) so pulled up beside me and tooted me. Well okay, you don’t need to be told fuck you because I told you pretty good already last night.

All this took well under 90 minutes. And those are just the incidents I can remember. 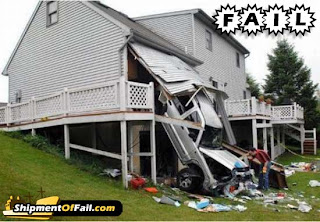 Compared to what we suffer from cars so frequently, a cyclist would have to jump up on your bonnet and beat off over your windscreen. Maybe then I’d show some contrition. “Oh yeah, well okay maybe he went a little too far. Did you toot him or put the wipers on or something?”

That’ll do, that’s my rant over. Only other thing I said to Jamie was, “As if I give a fuck what scooters do. Run them over by all means.”