Skip to content
When you get to certain age, people don’t aspire to be strong, fit or fast any more. Just merely being slim has become the new goal. Modest as it is, it’s a hopeless aspiration for many and a cause of envy for others. Though others may struggle with it, when someone compliments me for being slim it sounds to me like I’m being damned with faint praise.

When you’re young no one would dare call you slim. Not for blokes anyway. It’s a very effeminate and emasculating compliment. What you want to hear is questions about whether you do your washing on your abs, or crack nuts between your biceps. You want someone to challenge you to a push-up competition, chin-up, anything, hell a pie eating competition or who can piss up the wall highest. Then as time goes on it would seem that merely avoiding being fat is a form of success.

When complimented for being slim (see my lovely physique below) the follow-up question is, how do you do it? My stock answer is, “It’s called exercise, you should try it.” That often doesn’t suffice because the person asking after my slimness does exercise. They attend one of those classes at least once a week and raise a paltry sweat in the cloistered confines of a fitness studio. They’ve also recently started one of those combined therapy classes, like yogalates, zumbayogalates or zumbayogaspinclasslates. Some even have a personal trainer. A personal trainer! A whole other human dedicated to moving their fat arse through an hour of exercise. So my answer, it’s about the exercise stupid, doesn’t cut it.

At this point I admit to them that I cycle. And then with a nod of resignation they say, “Ah, you cycle,” because everyone knows that cycling is dangerous and unobtainable for anyone over the age of…say…14. And it’s also amazingly good exercise. I can burn more calories cycling to the pub and back home than they do in a single class with a long and convoluted title. Even a single syllable class like Zumba probably isn’t as effective as riding a bike to and from the Zumba class.

It always amazes me that it takes two people just get one person through some exercises. The personal trainer seems to be a badge of honour for some people. You know how they talk about “my personaly trainer” like this person has no other clients. It’s not like they’re on the payroll like my butler and French maid. To me it seems like a badge of laziness and stupidity. Unless you’re an elite or sub-elite athlete the appearance of a trainer on the scene is really just testimony to your inability to get yourself going. And if the trainer was any good, he (or she) would turn up at your door and ride with you to the training facility. Because it’s the ride that’s doing you the most good.

In Australia few people ride anywhere. There are so many SUVs lined up outside the local park during training sessions that I despair for what would happen if everyone in  Oz decided to get fit at the same time. We’d choke to death on our own car fumes. 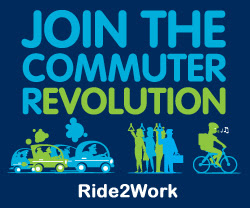 Our inability to see bikes as transport is the reason we have Ride2Work Day, one day of the year when a few people are coaxed out of their cars with camaraderie and a sausage sizzle. As ever, I won’t ride to work on Ride2Work day, because I work from home. My wife has joined in the Ride2Work fun though and has entered a competition to win a Trek bicycle. Needing a slogan for  Ride2Work my wife emailed me looking for suggestions. (Only natural when you have accomplished writer and self-taught publicist in the house.) Here are the results of my brilliance:

We’ve already been advised that they’re popular around the office but unlikely to be used. So if you do see one of these on a t-shirt come Ride2Work day, you’ll truly know that down at the Ride2Work office they truly had slim pickings for decent slogans.