Skip to content
You have to love the way people react to bikes. Ignites passions that really have no explanation.

That said, I’ve been cycling around a bit lately and no-one has abused me or told me off for anything. Kinda doesn’t feel like cycling at all. Takes the edge off it and makes you wonder if you should be cycling at all. Maybe I should get into the street art scene or start grinding rails with my skateboard outside the local bank. (You know, if I had a skateboard or could grind rails.) And then someone makes my day.

I was crossing Gold Coast’s Southport bridge when a lady bailed me up to tell me how much I was doing wrong by cycling and breathing all at the same time.

For those who don’t know our bridge, it’s this one: 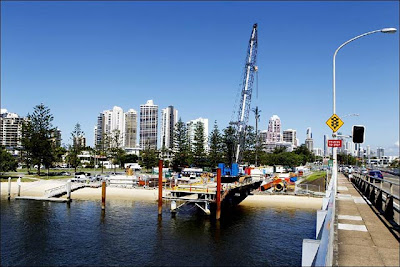 That’s the old bridge on the right with the dodgy footpath barely wide enough to two people to pass each other. The thing on the left is the new bridge that the Gold Coast council tried to stop. Apparently shitheads like pedestrians and cyclist were going to use the new bridge so it’s reasonable they should oppose it.

Or will one day when they get it built and buy the yellow trams.

Despite the appalling condition of the Southport bridge it is our best bridge. Our next best bridge is so appalling they fine people for riding over it. You can cycle on the road bit and there’s a big sign telling cars not to overtake cyclist on the bridge but you can bet your house they never bothered fining a cartard for that. Not sure what makes a bike crawling along a pathetic excuse for a footpath at walking pace so much more dangerous than a Prado crowding a cyclist into a guard rail but there it is. Shows how little I know.

Anyway, I was on the big bridge in the first photo when I rolled up next to two women and said, “Excuse me.” They stepped out of the way and then the younger one proceeded to give me an earful. “Don’t you know you’re meant to walk your bike over the bridge! Doesn’t anyone read these days!”

I expressed my surprise about being required to walk over the bridge and told her brightly, “Anyway, I’m riding at a really careful pace and I’m so polite and charming about it.”  I was informed by her that I was the only polite one, “So that ones one out of two,” she said resolutely. At this point my charming and flippant attitude was evaporating and I thought it wise to move on before she pissed me off. There are only a few calm seconds between charming and ugly so I moved on quickly with a, “Oh well, so long as I’m doing no harm.”

At the end of the bridge I stopped and read the sign. There is no mention of walking. She is perhaps confusing the Southport bridge with the unhappy face bridge above.

People are so helpful. I wonder how I’d find material for my abnormal blogging schedule if it wasn’t for the irrational and often hateful attitudes people have toward cyclist. If I  have been a bit quiet this last week or two it because I’ve been madly blogging and SEOing (new word, made it a verb) this Gold Coast trade directory. I’ve also completed renovated the old wearable video camera site (you know, the one that was two months old) because the previous one sucked balls and I’m supposed be like some kinda web guy or something. (Wearable video camera is such a tedious way of avoiding saying, “Go Pro clone”. But there, you know it and I’ve said it.  ) The new one isn’t too great yet, some glaring errors if you care to delve, but it’ll have to do for the moment. You can even buy cameras on it, so at least that bit works, in case you’re interested.