Skip to content
In a recent update on Reid wheels I posted this picture: 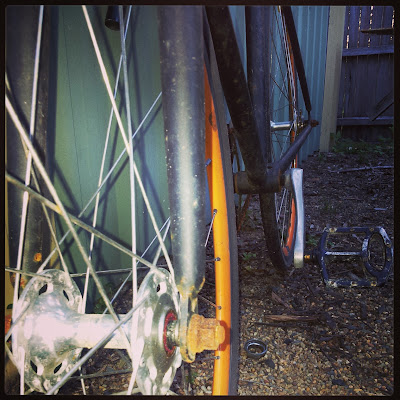 Those aren’t orange nuts designed for matching the rims. That there is some Gold Coast chrome. Everyone knows that bikes have souls and hearts and stuff and this kind of neglect is hurtful to them. Unless you’re me of course and you know that bikes are utilities for getting about on and no-one gives a shit how your bike looks except you and a few kids. Still, this kind of rust is pretty poor sign of neglect, even from me.
What I do know is that shit rusts on. I tried to adjust the chain last night and it required the addition of tools and effort not normally associated with removing a wheel. Too bad had I tried this roadside with a flat tyre. Needless to say I applied copious quantities of high-quality grease when re-assembling.
Pity I don’t know how to grease up properly yet because Gnarlube haven’t provided any instructional videos. I even watched this “making of” video in case there were hints therein:


GNARLUBE Behind The Scenes Photo Shoot 2011 from GNARLUBE™ on Vimeo.

It’s been well over a year since I’ve been able to adjust my seat. It’s so rusted that even sacrificing a saddle with karate kicks and whacks with a mallet didn’t budge it. Thankfully it’s pretty much at perfect height so I’m beyond caring about adjustments now.

I’ve flirted with riding fixed but the truth is I’m a rusted on single speeder. For the sake of my credibility I’m trying to man up and get fixed again. What’s spurred this latest foray is the beautiful Brown Jersey in my garage. This is definitely one of the nicest bikes I’ve ever ridden. It has that elusive x-factor that elevates bikes beyond the mere angles and metals of its construction. There were two niggles with it though. One was the brakes. They just don’t work in this format. They other was the clunky freewheel (which I’m told  by Brown Jersey is being replaced by another). By swapping to fixed I can do something for both these problems in one fowl swoop (which is how I used to say fell swoop, but thankfully no-one ever noticed).

Having flip-flopped the rear hub the other night I was ushered into a new world of smooth and lovely riding. In my review of the Brown Jersey Divvy Van I went on a bit  about how good the bike rides. That was in the first blush of our romance. Later I started noticing her flaws. The most notable was the clunky freewheel. I’m continually chasing the dragon of peak experience when cycling, the happiest moments of my life when the bike just seemed to hum and I seemed to belong and the whole world had conspired to put me there for that one perfect moment. It may never happen again but with the Brown Jersey it’s disturbingly close but improbable because of the knocking from the freewheel. If that sounds too grandiose then imagine you’re building toward orgasm and then your mother-in-law is knocking on the door saying, “Are you two all right in there?”  It’s that sort of thing okay?

In fixed mode the bike is so very dreamy that I’ve been taking the long way home. In fact, on the first night after the flip-flop I did three laps of the block on the way home from soccer, just to draw things out a bit.

Just proves that even things that are rusted on can be budged, sometimes. I’ll need to change frames if I want a new seat height on the Mojo but the rusted bolts came off and I’ve got myself a fixed bike again. I think the next stop will be some pedal straps from BO Gear. Then we’ll see how long I last this fixed time.

Meantime, the water is still warm, the sun shining, and the surf just gorgeous today. It’s time to put the Carver surf racks back on  the long suffering Mojo and go work on developing some more Gold Coast chrome.