Skip to content
I was watching something on TV the other day, can’t say what, probably a reality show huh? Reality is big on TVs, or at least that highly edited version of reality they have. Person A triumphs, cut in footage of person B pulling a funny face from earlier that week, now looks like person B is a bitch. They’re just semblance of reality shows, but I’m fine with that because they’re also quite entertaining.

Anyway, I was channel surfing in the ad break and come across one of those current affair type shows. You know the type. They pretend to be about current affairs but what they do is find a dodgy builder and stick a camera in his face and hope he throws punches. Then they run an interview with Dawn French. This particular night they were running a stitch up on cyclists. Apparently we’re all grossly negligent and dangerous road users.

I have to confess I didn’t watch the whole thing. My brain went “yadda yadda yadda” and I turned back to find out who had past elimination and who had to pretend to be happy for them. The gist of the article was that we don’t follow laws, we think we’re beyond the laws, and someone’s gonna get  hurt.

They trotted out the old guy who was killed by those dickheads in a bunch sprint in Melbourne. Now that cyclists have actually killed someone we’ll never be forgiven for it. And we’re all culpable because we were all in that bunch when it happened. Just as well cars never killed anyone or they couldn’t all be so pious.

Oh wait, according to government statistics cars and trucks killed 1,307 people in 2012. But obviously that’s just a couple of bad eggs making everyone look bad. Well…over 1,000 bad eggs obviously. But not largely representative of the good people who drive cars. That’s the important point here.

In that other bastion of investigative journalism, my local rag, there’s outrage this week about an article that ran last week featuring bikes. How dare those fuck-wits talk about bikes! Don’t they know what scum those cyclists are? R.Brodie of Paradise Waters says,

“Looking at the photograph, you will notice three of the cyclists are not wearing helmets. Two are not riding in the special cycle lane and one is casually half-riding his bike next to the pedestrian, probably in the gutter.”

I like the bit about the special lanes. Kinda says, “We built special lanes for you turds now stay in ’em!” As to the helmets, well, the journo in questions, Andrew Potts, normally does those “I tried calisthenics for the week” type puff pieces, so I think we could safely say everyone was mugging it up for the photo.

I’m distracted by the guy who was half-riding a bike though. I want to know how that’s done. How do you half ride? Do you use just one pedal? Or do you cut the bike in half with a grinder? R.Brodie finishes his piece with a flourish:

“Youse cyclists are a law unto yourselves and scream blue murder if a motorist dare upset youse in any way. I rest my case.”

Brodie didn’t actually says,”Youse.” I added that bit. Kinda fits though don’t it? Anyway, his/her point is correct. I was out on my bike the other day, over-caffeinated and  going like buggery between lights with a tail wind. Then some crazy bitch in a family wagon fucking near killed me. And didn’t I scream blue murder! Shows you just what whinger I am. I should have been in my special lane for starters. No wait, I was in my special lane. And so was she. She came up behind me and turned across me into a side street. Still, I’m sure it was my fault in some way or I was half-riding in some way I’m not aware of yet.

Didn’t stop me from trying to chase the mad cow down. My fight or flight instinct goes all the way to nuclear fucking strike when my life is threatened so negligently.  Usually by the time I catch the vehicle some of the blood has drained out of my head and  I’m a pretty reasonable guy. Chasing this woman up hill I realised I’m not as young or fit as I used to be. Just an angry old man. And I was happy to see her get away. Let her go on and kill someone else I thought. Seems fair.

Fair is a funny concept when applied to life. Fair is not a concept I put too much thought into these days. Fair is for children. And you gotta grow up. It’s been a long time since I screamed at my daddy, “It’s just not fair!” Cyclist expecting a fair share of the road are just wasting their breath. We already have our special lanes. Any protection they give is just illusory but we’ve been patronized with a token gesture and now we should shut shut up. In some ways we’re better off knowing that everyone is trying to kill us and enjoy the sport. Commuting can be the most thrilling thing you’ll do all week, unless you’re into cave diving  or lion taming in your spare time. Enjoy the thrill. Childish thoughts of fair are Western preoccupations. They’ll land you in a goal in Bogota one day when you refuse to pay the policeman’s bribe because it’s just not fair.

Still I feel sorry for you guys. You all getting tarred with the same brush. Just because a bunch of selfish arseholes in Melbourne barrel through red lights at 40km/hr without checking for pedestrians doesn’t mean we all do. I’m very cautious when I run red lights. And if there are any pedestrians I give them a polite nod and a “no you go first, I insist” type courtesy. But I have to admit I  break all sorts of laws when cycling, from running red lights, to riding on the footpath, to not wearing a helmet. I’m guilty of some of the big ones too, failure to come to complete halt at stop signs for instance. I don’t dismount when crossing the road. And  my bike doesn’t even have a bell and that’s against the law too.

So I don’t see why, just because I’m a dangerous miscreant, you should suffer too.

I think I’m in direct contravention of several Australian design rules too. Ever noticed how all bikes ship with reflectors? Even fixies. That’s because they have to. They have to have brakes too, front and back. And I have had at least one bike seller tell me that they have to have a chain guard, though I see little evidence of this on other bikes. Perhaps we all universally ignore this rule. Whatever. The fact is by the time your bike hits the road it no longer complies with Australian design rules.

It’s almost impossible to cycle without breaking a rule or a law somewhere. It’s the same with walking. Pedestrians break laws all the time. Drivers rarely get upset with them because walking is  a horribly inefficient and emasculating way of getting around. I won’t walk to the end of my backyard if there is a bike available. The reason cartards get so upset with cyclist is jealousy. We move so quickly, we enjoy ourselves so much, we express our anger when we need to (as opposed to being locked in a cubicle with your own hatred, shouting ineffectually or tooting your horn at someone who couldn’t care less). We grow stronger by the act of transporting ourselves while they grow weaker. Of course the cartards hate us. Of course they want us to conform to a bunch of silly laws designed to prevent them from killing everyone. But since there are just so many rules and laws that we can’t conform to them all, all we can do is ride sensibly and make sure no-one gets hurt. Ride hard and be aggressive but know when to hold back.

Just don’t expect a fair go. And don’t expect everyone to love us. Besides, that would take some of the sport out of it and cycling would be less fun. As Johnny Lydon said, anger is an energy. Go harness it and see how much you enjoy the next ride. 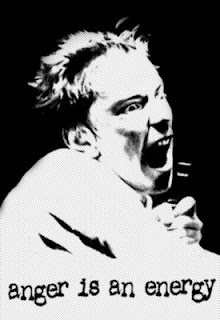