I’ve always wanted more leverage. The power to sway newspapers and have my local governors acting like playful lapdogs. Would it be enough though? Or would I want to own the newspaper and have the PM eating out of my hand? Like Rupert Murdoch.

Well I am the media goddammit and I have influence. You might remember the Brown Jersey Divvy Van I reviewed a while back. If you don’t, I’ll give you a moment to read it.

Okay, done? If you read that article (really read it, not skim read…you weren’t gone long…) then you’ll know I loved pretty much everything about it except the brakes. They weren’t so hot. I said, “The brakes never inspired confidence”, which is a polite way of saying they sucked a little bit.

Of course when you’re reviewing a bike that could potentially be ridden fixed you have to keep in mind that real men (and women) will ride it without brakes. It’s only pathetic drooling imbeciles like me (and about 90% of the people who buy these bikes) who rely on the real brakes actually attached to the bike. I’ve always said that stopping is as important as going, and the better you can stop the faster you can go. But that just shows you how soft I really am.

It was reasonable to assume there was no problem with the actual brakes, since I’ve seen them on other bikes. The real issue was leverage. When I swapped to wooden bars and Dirt Harry levers recently the brakes were great. 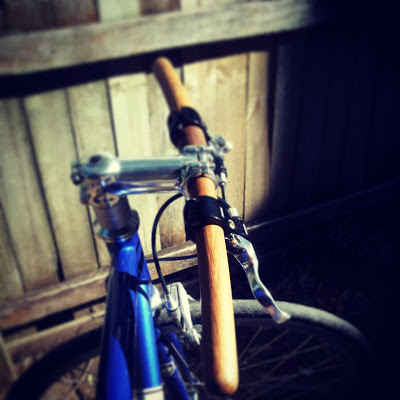 Such is the enormous power and influence I wield, my ability to turn markets, lift people to enormous heights and drag them back down again, when I criticized the Brown Jersey brakes they knew they had to do something about them. (Okay, they were already aware and already acting. Don’t crush my dreams people.) Hence they now have new levers that look just like the old levers but are in fact new levers. And they work. They work just fine. I have all the stopping power I need, I can whip the bike into skiddies, I can stop without requiring too much forethought and I can ride how and where I like without wondering what I’ll do the next time some dickhead in a Camry  cuts me off (as is, every five minutes when riding through Surfers).

As this is probably all the leverage I’ll ever get, both on the bike and off, I reckon I’m happy with it. I might not have politicians hanging off my every utterance but I’m unlikely to caught in a phone tapping scandal either like our friend Murdoch. What’s more important here is that the Divvy Van, which I loved so much, fixed its only real flaw. Loving it even more now.