I can see why the world’s religions will never agree. When I consider how hard to is to dissuade people from their notions of me as some kind of sub-elite racer boy I wonder about notions of blind faith. Just because I own bikes doesn’t mean I’m semi-pro. I own a football too and no-one is assuming I’ll be running out for Essendon any time soon.

But when it comes to bikes people have only one concept of cyclist in their little brains and even when I tell them I’m not that guy they make no act towards comprehension. They don’t even try. They can’t even be looking at me because one glance would tell them I’m not sub-anything except perhaps sub-normal.

The other day the Optus rep returned our shitty Samsung smartphone (smart phones for stupid people if you ask me) for the third time and couldn’t help noticing how many bikes there were in the office.  I tried to convince him that just because I have a bunch of bikes doesn’t mean I’m a serious rider. Then he noticed they only had one gear. Since he was making no effort to understand I did what I do with these people, I added to his confusion, and told him it had two gears.

This is a gear: 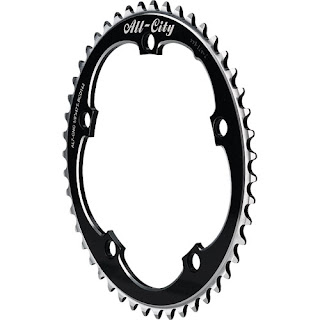 And a single speed bike has two of them. (Yes, the cog at the back is also a gear.)
Of course single speed is a pretty stupid name for a bike that can go as fast or slow as you want it too, so technically it’s a pretty stupid name for a blog too and the laughs on me.
Anyway, the guy looked confused and then asked if I had a bike with gears. Yes, I told him. Full carbon with all the gear I bet, he asked enthusiastically, making it abundantly clear that we were having two separate conversations. I own a Reid Falco I last rode it in Feb. Lovely bike but if I’m heading out on a bike with gears at this time of year it’s going to be a mountain bike.
When people realise my bikes only have two gears (okay, let’s call it one for the sake of clarity) they’re swayed one of two ways. The first is to assume I’m super human, getting about town without gears to haul my fat arse up hills. Of course, if you have a certain basic level of fitness gears aren’t often necessary round town. (Yeah, there are times when I would gladly change gears if they were there, like riding in a 30 knot headwind.) The other thing I cop, and I’m sure you all do too, is there are perfectly good bikes out there for $500 that not only have tonnes of gears but suspension and stuff too.
I know how terribly inefficient these bikes are because I’ve been caught behind then. Rolling down any descent, even just coming off the Southport bridge, I have to brake to avoid running into the back of these bikes. And they’re pedalling.
Still, apparently we’re the nutters.
So how important is the bike relative to the rider? Thankfully we have this account to show:

I’m amused by the idea that the track cyclist is disadvantaged by the quantity of gears (or lack of) at his disposal. He’d be well used to getting around Herne Hill Velodrome without gears. They have a word for turning up to a velodrome with gears. It is called cheating.

Still the competitive cyclist beats the newspaper hack on the cheap commuter. Shows you that the concept of a bike is fairly efficient in its most basic form. Later variations of the test prove how important it is to have a bike that is efficient. And by efficient we all know I don’t mean “with more gears”. Riding on a track it’s difficult to see how gears would help you, except to get started. Beyond that you only need on gear, as every track rider everywhere around the world attests to each time they race.

Chris Froome showed the importance of having an efficient bike this year in the mountain time trial. He swapped bikes for a time trial bike as they hit the flat and more than made up for the time it took to stop and change bikes.

It’s a pity more people don’t see the fixie for what it is. Your single speed/fixie is defined by the job it needs to do, get about with style and efficiency. What people see instead are the result of their pre-conceptions.

Oh yeah, I get asked a lot if I’m a hipster. That makes me laugh. If only!

If I’m going to finish where I started then I’ll have to revisit the notion of faith and religion. What I say there is we’re the ones rhapsodizing over bikes with one gear, as though it matters, we’re the one digesting this stuff, writing and reading about single speed bikes. We’re the ones drooling over bikes with one gear, while next to it a bike almost identical but with gears goes ignored.  We’re the converted. We are, it has to be said, the nutters.