The conclusion of the Tour has a left a big hole in my life. I love the Tour. It’s got bikes and that’s where my interest starts of course. But to say the Tour de France is about cycling is like saying a pub crawl is about taking a nice stroll with mates.

Of the many thousands of people involved in this event each day, less than two hundred actually ride bikes. If you saw the Orica Green Edge buss stuck under the finish line day one of the tour then you’ll know what I mean. 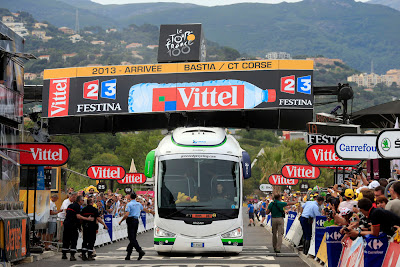 Let’s not forget also that this is an event where the crowd stands on the course. I saw more than one spectator become part of the action. You can only wonder how exciting football would be if the crowd stood on the field with the players. Perhaps even NRL would be interesting. (Apologize to my Queensland and NSW brothers. I tried to like it, honest. But it’s hardly the most intricate of sports is it?)
With this in mind here is a shortlist of my favorite Tour de France moments for the year.
Crowd Highlights
Man running up the hill beside cyclist unwittingly backhanded by other spectator gesturing at something. Fairly knocked him off his feet. This is why you need a DVR people.
Man running with pig under his arm.
Man running beside cyclists, tackled by gendarme.
Interview Highlights
Mike Tomalaris interviewing a cyclist from Green Edge while a woman stood in shot impatiently waiting. Clearly wanting them finished because they were holding her up. Looked like she had something really important to do too, like stacking chairs.
Mike Tomalaris
If there was a windy beach to do an almost inaudible round-up from then Mike found it. His sense of location sometimes over-comes his common sense but I love the guy. Has there ever been a tour without Mike? I hope not.
Race Highlights
Any year with Ventoux is always a good year.
Double-Huez. Fantastic.
Stage win and yellow by Orica Green Edge.
Richie Porte. Is he our next Stuart O’Grady, the super-domestique that every winning teams needs? Or does he go on to get his own show?
Champs-Elysees and the full Paris spectacle with a loop around the Arc de Triomphe, a bypass by French fighter pilots and light show during the award ceremony. Enough to bring a tear to your eye.
Award Ceremony
Is there another sport where they celebrate the winners by dressing them in public? Were they diamantes on Froome’s yellow jersey?
I think this was one of my best tours ever.