Skip to content
Rumoured to be disquietingly charismatic by some and just disquieting by others. Some say he should run for government. Others say he should try run down the shops and back without getting into trouble. I can only judge the man by his outcomes, never having met him despite my numerous visits. He’s always out to lunch or something.
Jim Junkee has a new enclave, a shop, creative space, a warehouse and lounge all rolled into one in Brisbane’s Kelvin Grove. It opened recently and I’ve been hoping to get there and see the new space and perhaps catch Jim at work. I was lucky enough to coincide my visit witha sneak peak of Jim’s latest creation, the Street Jumper.
I dropped by on Friday because we here on the Gold Coast we had a day off to check out chicks and visit the fun house. (Neither of those have a double meaning. It was show day. You have to love a country who knock off for a day so they can go look at chickens, throw darts at balloons, toss rings at little boats and ride fairground rides.) 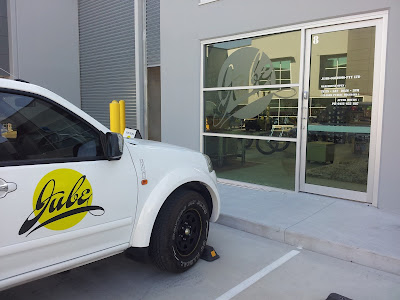 From the outside Jube HQ is unprepossessing, except for the frosted glass logo and the Gran Chorizo parked out front it might be any other shop or factory. But then there’s this inviting sight: 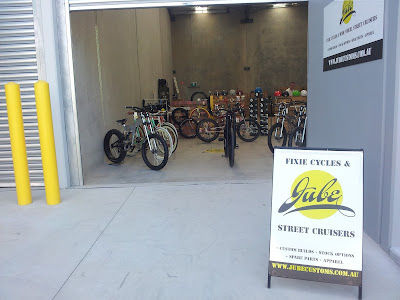 There are great things happening at Jube. I’ve covered their custom fixies before and there was one of those sitting on the floor. 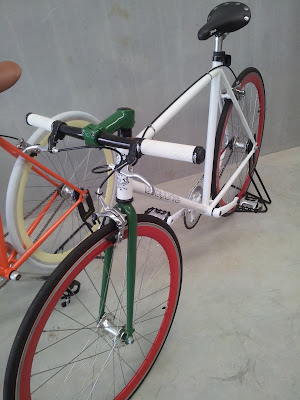 Mostly though customs are one-off creations nutted out between Jube and the prospective owner while sitting in Jube’s lounge: 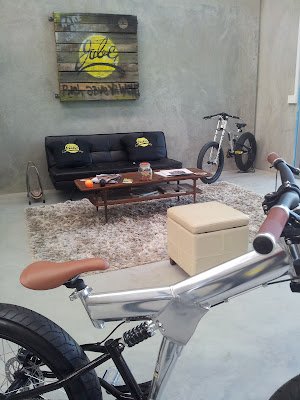 There are appropriate texts to inspire, from custom car mags to 15th century alchemy manifests. Jube have a colour palette and years of design to help bridge the gap between inspiration and realization. If you have half an idea for a custom bike discuss it with them because it’s surprisingly affordable to get a fully sick fully custom fixie, like this one leaning against the lounge wall: 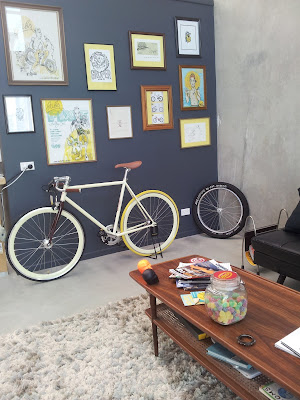 There is also a collection of stock fixies for your delectation: 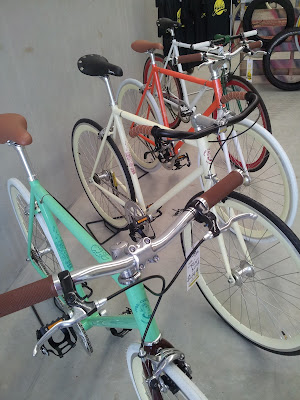 Sadly Jim’s workspace wasn’t graced by the man himself. His custom wrought bike stand was there, bolted to the ground and built to withstand the forces of his genius:
Jube’s Street Cruisers have a strength of personality and purpose that is hard to deny, part bike and part force of nature they seem to possess the gravitational pull of planet and exude the charisma of their creator. While the Street Cruiser doesn’t quite exist within my sphere of existence I’m eagre with anticipation for the new Street Jumper seen here in prototype form with its black on black paint scheme. 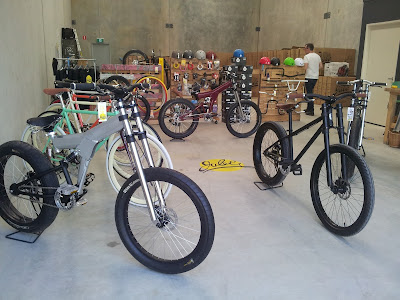 Production models are expected to be gracing Jube’s showroom floor in about 8 weeks. You can expect a full review soon after. From my quick spin around the Jube carpark I get the impression the bike is part jump bike part willful disobedience.
Jube’s new home is well worth a visit if you’re living in Brisbane or its surrounds. Or you live in Dubai and are looking for a change of pace. There are new stock fixies coming, the Street Jumper and a return of the fabulous Jube Dragster. If that doesn’t make you want to stock up on musk sticks, fags and choo choo bars and get the hell down there then I don’t know what motivates you people.
Many thanks for Jube for their hospitality. 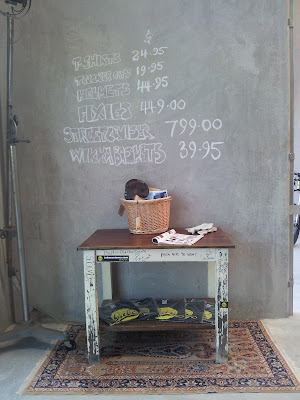