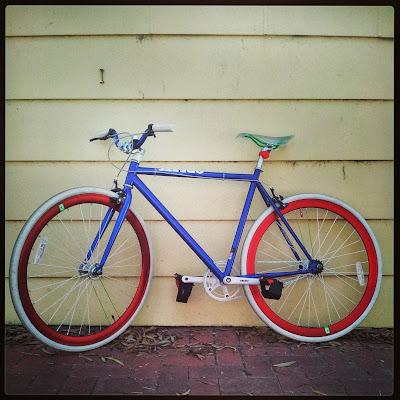 The Create is a brand from England that hasn’t had a presence in Australia until now. Their fixies come in two flavours, the C8 and its bigger better brother the Create Originals Fixie, which is the one I’m reviewing. It sells for $449 from  Reid and for that money you buy a whole bunch of style. 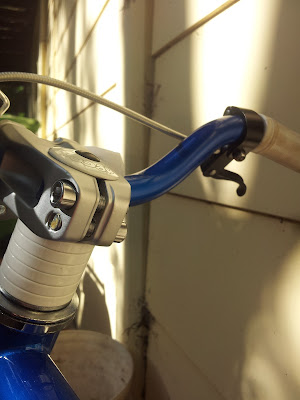 There isn’t much on this bike that hasn’t been dwelt on by someone with a background in design and a passion for cycling. It abounds with thoughtful touches that either add style and/or substance to the bike. It comes shipped with the kind of finishing touches I might make to my own bike if I was smarter or had a flair for design. Things like the embossed headtube badge. Such a neat idea. Classy, discrete and permanent. 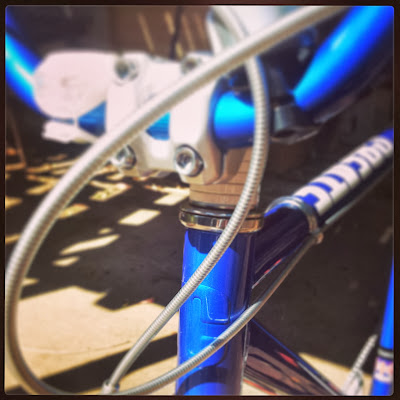 There’s a design theme that runs through the bike, from the plastic seat to the plastic brake cable clips, the use of colour, the BMX headset and bars. It’s a very bold design yet as bold as the design is they have also shown some discretion. They could have gone overboard  with some clear plastic pedals but went instead for black plastic pedals with Create branded straps. Where a less deft touch might have gone for broke Create have known when to go crazy with colour and quirk and when to ease off.
There’s no shortage of colourful and quirky touches. The wheels are red with white and green spokes. The saddle is transparent with green rails.  The frame is blue. There are white headset spacers and blue handlebars with white grips. Even the hubs are mutli-coloured. The fact that this doesn’t amount to a colour overload is a testament to careful but obviously fairly bold design choices. It would be hard for you to emulate this kind of design at home with your own bike without being in danger or giving someone a headache. 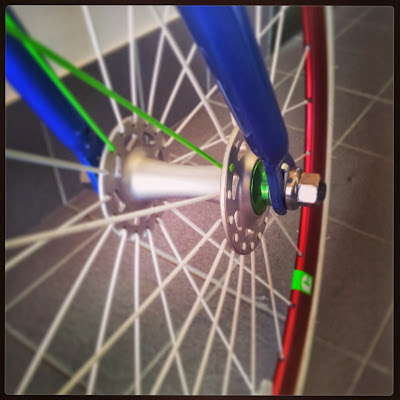 The design isn’t all aesthetic though. Like the rear hub with its six bolt disc brake attachment for the fixed sprocket. It’s a solid design and will make it trouble free and easy to get sprockets on and off. Almost everyone has a torx head driver in their kit. Certainly there are many more bikes with disc brakes than screw on fixed sprockets. It was also pointed out to me by someone smarter and more observant (yeah I know, that could be anyone) that the green spokes straddle the valve, making it easier to find the valve. As someone who has a firm belief that valves deliberately conceal themselves when it’s time for pumping I reckon those green spokes are the smartest thing on a bike for a long time (unless you count this guy). 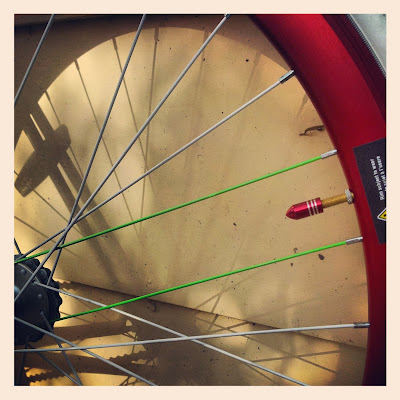 If you ride fixed you’ll appreciate the pedal straps. It’s good to see a bike ship with straps, like they’re encouraging you to go fixed and hit some skids. I know I certainly did. I flipped the rear wheel first thing and went off and practiced my skids. I hope Reid weren’t expecting to get their nice new white tyres back in perfect nick.
The hubs are sealed units and glide along effortlessly. Everything else is sealed as well. If your bike shed can sometimes be a maintenance free zone, like mine, then this bike will fit comfortably in your line-up. I doubt it’ll complain too much.
The BMX-style bars are nice and narrow and have only just enough flat area to accommodate some short grips and the brakes. Coupled with the short headset you get a set-up that is begging to be thrown around. I expected it to be slightly cramped but I never had this feeling. The bike feels small and nimble, like it’s built for fun, but didn’t feel too short. 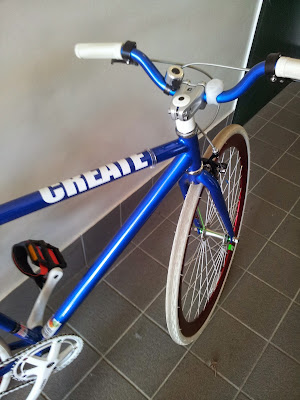 The brake levers are cyclocross style levers from Promax.  I see these types of levers everywhere on fixies and had wondered if they were any good. I’m a convert now for sure. They fit comfortably in the hand and have plenty of stopping power. I found it comfortable to ride along with my hands on the brake hoods (so to speak…if there were hoods) and give a little squeeze when required. Late in the week I converted the bike back to single speed and the back brake had plenty of power for skiddies. The levers are small so you might think leverage is an issue but they fit in my hands comfortably and I can’t complain about needing extra stopping power. One thing I did notice is they have no adjustment at the lever. It’s obvious of course but when you have a new bike you get cable stretch and you find yourself leaning forward at the lights to fiddle a dial that isn’t there.
The ride of the bike was an unfamiliar one for me and I had to go through the same adjustment process I had with the Yes bike. My usual ride, the Brown Jersey, has a classic road bike geo. In contrast the Create is set-up for thrashing, freestyling and just plain styling. The front end felt kicked out and a felt like it wanted to push out in corners when jumping straight off the Brown Jersey onto the Create. Once  adjusted to the different ride the bike’s playful nature became apparent. The slack front end allowed me to ride off the back wheel like I would on a mountain bike. Trying to steer it like a traditional road bike doesn’t bring out the best in the bike. In contrast, getting your bum off the back a bit and throwing your weight around made the bike shine in twisty stuff. Getting back on the Brown Jersey made that bike feel like the front wheel was tucked in underneath me. The Brown Jersey is a very neutral steering bike, point and shoot really. The Create rewards the rider who drops the seat and attacks things with a bit of gusto, who jumps over things and uses lips as launching pads rather than something to be avoided. 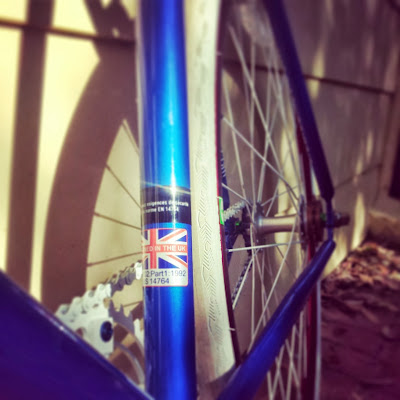 One thing I struggled to adjust to was the seat. I wasn’t perturbed by the hard plastic seat at first. It was well shaped and looked like the sort of thing I could get used to. But I found my sit bones sat directly on the hard plastic and on one longer ride my ass went numb and over time that numbness spread down my legs. It’s a roughly 25km round trip down to Broadbeach and that’s about as far as I could go on that saddle on that day. It’s all flat riding and all done in the saddle and my bum went on strike.
When tooling round town and getting out of the saddle for sprints between lights and negotiating traffic the saddle wasn’t an issue. The Broadbeach  ride  (which was meant to be a Burleigh ride but I cut it short) was almost all flat and almost all in the saddle. In retrospect it was my fault trying to use the bike for what it wasn’t designed for. When I rode it around town, attacked gaps and riding with a bit of aggressive the saddle wasn’t an issue. I did 45kms in the saddle on the final day, around Gold Coast and Brisbane, in traffic and bike paths, and I never once thought about the saddle. If the bike was mine I’d definitely keep the saddle. But I’d also use the bike the way the maker intended. Long Sunday rides are for a different kind of bike. I wouldn’t take my mountain bike on one and I wouldn’t take the Create on one. 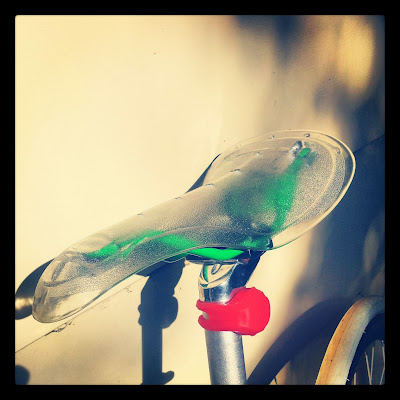 You definitely get bragging right with this saddle. Standard road bike saddles make most people oooh and aaaah at how hard and narrow they are. (Most people, as in, most people who don’t ride or who have one of those big mushy seats.) You wrap some knuckles against this baby and watch their eyes pop. If being fixed and having only one gear isn’t enough to convince your family you’re hard-core then show them this saddle and soak up the bragging rights.
I rode most of the week with the bike fixed. For me though the bike came alive when I converted it back to single speed. I’m not exactly adept at riding fixed. I can’t for the life of me figure out how to bunny hop on rotating pedals. Those are my limitations and I didn’t want to make them the bike’s limitations. By going back to single speed I was able to take advantage of the BMX-y feel of the Create. The bike is short and feels ready to chuck about. The tyres are 700 x 28 so you have enough rubber to get stuck in without pinch flatting. The bike looks and feels sturdy and just about everything about it is encouraging you to have some fun. Even the saddle is telling you to get out of the seat and ride it properly.
Lifting the front wheel, flicking the bike about, jumping gutters and generally going over or through obstacles rather than around them was the call of the day on the Create. Urban riding can be a lot of fun with the right tool and with this bike a bunch of new lines open up. You can extrapolate that to freestyle if you want. I can’t do much in the way of fancy shit but I could easily imagine the possibility on this bike. I can get around with a bit of flair though when I have a bike like this making me look good. 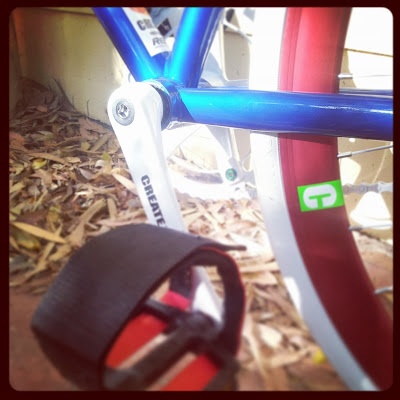 It’s interesting to see in this bike design elements from various other bikes coming together. In some ways it reminds me of a hard-tail mountain bike, not a cross country one though, something with a little dirt jump in its DNA. Cross that with a bit of road bike, some BMX and you’ve got a ride that is very distinct and is very much a fixie breed of its own. Whatever. It all makes for a bunch of fun and means you can ride with the traffic, against and across it, over gutters and obstacles, then back into the flow. It’ll bring out your wild side. I know I found new ways to get around town.
In some ways the Create was the bike I’d always wanted but never knew. I used to get around town on a single speed mountain bike and enjoyed the possibilities for jumping gutters and having a bit of fun on the ride. But compared with fixies it was too slow and once I moved over I never looked back. This bike has the best of both bikes in its make-up and the more I rode it the more I enjoyed it. If I’d been able to think up a good excuse to hang onto it (“The bike is crying and doesn’t want to return to the shop…”) I would have kept it a bit longer. I’m not sure which of my bikes will recapture that fun for me now it’s gone. I wonder if my wife would allow me to introduce another bike into our household…