There are few things worse than bad rap. I should know, I posted one on my Facebook page for Ride2Work day. Combine bad rap with bike safety and you have an almost criminal level of intend to harm.

A whole rap about lights? Who knew there was so much to say about bike lights?

(I’m assuming it’s a whole rap about lights. Maybe he gets into quantum physics near the end. It’s not like I watched the whole thing.)

But at least he’s not a member of the puppet regime propping up the helmet manufacturers:

If you ever read any of the anti-helmet law rants you’ll find that one of their gripes is that the laws are just a secret way of building revenue from bike sales. Once again a case of the powerful Bike Industrial Sector dominating government policy. (So…puppet regime. Get it? Oh forget it then.)

Helmet ranters often reckon compulsory helmets are a way of making cycling appear dangerous, thus preventing more people from taking up our wonderful pastime. I love helmets because they’re a perfect place to install a thin layer of tin foil so the government spy radars can’t read my thoughts.

I’m assuming that’s why this guy has a bicycle helmet on though I think he needs his tin foil upgraded because someone already inserted all sorts of crazy in his head.

At least our passtime doesn’t need a warning abut knives. Then we’d have to endure this rap. I can only assume is aimed at children with Tourette’s Syndrome:

Stay safe, stay out of reach of harmful rap songs and remember there is a difference between fresh and fly. 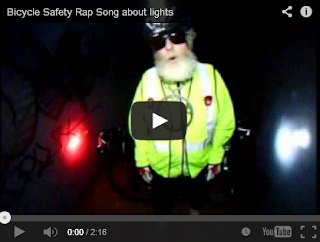