Skip to content
Those of you who read my last two bike reviews will know how I was challenged by the ride of those bikes. While I was ultimately won over by both bikes it was reassuring to swing a leg over a bike with a more traditional make-up. I felt at home on the Chappelli straight away.First up though, how’s it look? We all know we’re vain and insecure and need a bike to make us look good. No wait, that’s cars I’m thinking about. And me. Anyway, good news, the Chappelli looks great. The bike I got had a nicely finished matt grey frame with chrome seat stays, chain stays and forks. It’s a subtle finish for those who appreciate a bit of understated cool. I bring home quite a few (okay, a lot) of bikes and it’s always interesting to see who comments on what. In general the more understated bikes, if they’re well finished, will attract the most comments. The Chappelli raised some appreciative comments straight away. 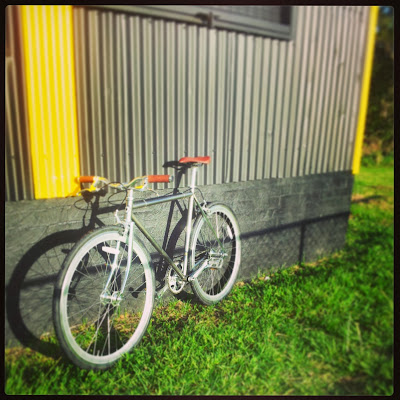 There are some nice touches on the Chappelli. The leather seat and leather grips both have the same print stamped into them.  It’s the sort of thing that caught people’s eye straight away (though one did refer to it as faux-Louis Vuitton). Also the quill stem looks neat on this bike, matching that curved chrome fork. I’m not sure if they ever had leather grips in ye-olde day (I’m a bit ye-olde myself but they’d well and truly fell in love with plastic by the time I got my five speed Northern Star) but the whole composition and look of the bike harks back to less frenetic times. (People have always looked back to simpler times, all the way back to Plato and his mates grumbling about how the young folk of today are going soft. So we’re all thinking back to a mythical time in an indeterminable past and that’s where this bike draws some small part of its lineage from. This harkening isn’t as obvious as, for instance, the Papillionaire I reviewed, but it’s there to some degree nonetheless.) 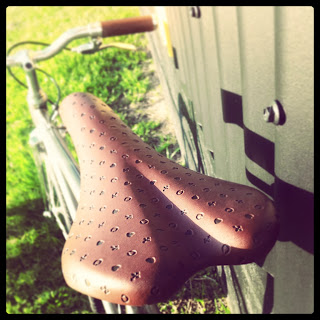 The ride of Chappelli Cycles single speed is everything you expect from a bike that harks back to our mythical past. The bendy forks change the way a bike steers and it took me a few rides to be totally comfortable with that. No doubt when I get back on the Brown Jersery the front wheel will feel like it’s tucked up underneath me somewhere. The bike steers predicably and has no bad habits but I did try and drop it into a corner in a way it didn’t appreciate a couple times before I got it into my head to give the bike little more time. 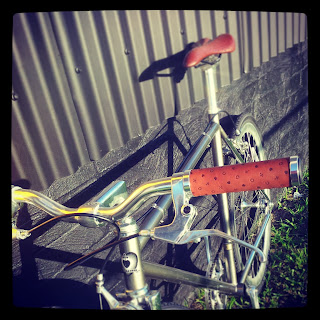 That gives you an idea where the bike’s coming from. It’s not a bike for speeding around town. Nor quite the  sedate cruiser. It feels comfortably in between and could easily take on a bit of both if you wanted it. It’s a flexible city commuter, bike trail wanderer or café poseur.

The Chappelli rides away from their online store for $375, which definitely puts down the budget conscious end of our market. For that money though I don’t feel like they’ve cut any corners. The brake cable is neatly routed through some of those nice brake cabley things, the paintwork looks lovely, and the overall finish is good. The brakes aren’t exciting but they have some massive levers on them, as you can see above, so despite feeing a little spongy at first they stop plenty good. The bike rolls smoothly and I never got the impression I was riding a budget ready bike. 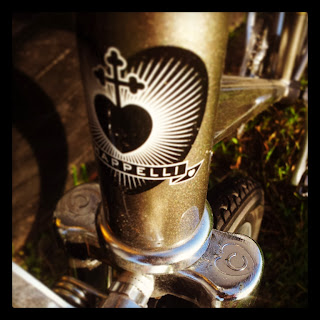 The bike climbs well and is helped by a fairly easy gearing. I’ve long wondered why all single-speed/fixies have (pretty much) the same gear. That gear is quite tall and will intimidate entry-level riders. It’d put off quite  few female and intermediate riders too. I think the Chappelli has done well to offer something geared down just a tiny bit, just enough so it’s reaching down to those riders and offering them something they’ll be comfortable with. It’s also offering the rest of us something we can ride at day’s end when out legs and tired and you’ve still got those hills between yourself and home.

There are some fat tyres on the Chappelli. I like a wide tyre. Skinny tyres are for racing. At 700×28 the Chappelli’s tyres are on the upper end for a single-speed/fixie and that again gives you an idea of where the bike sees itself. As a comfortable commuter the Chappelli shines. I found the extra rubber reassuring. My regular ride, the Brown Jersey, still has skinny rubber on it, around the 22 mark. That brings with it an extra duty of care and it was nice to ride a bike on which I could be a bit negligent when it came to things like driveways and cracks in the footpath (or about having decent tyre pressure). It took the bumps out of life too. At one point I had to over-take some people on a shared bike/pedestrian track, meaning I had to venture onto the tree rooted grass. I braced for a shaking but the bike sailed across with hardly a nudge. At times like that I wonder why I don’t have more rubber on my bike. (And then I remember it’s because I’m a cheap bastard and I’m waiting for these tyres to wear out first.) 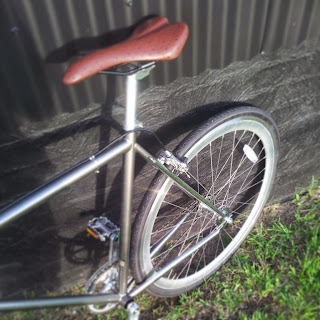 Despite my impressions of the bike’s somewhat relaxed nature I felt I was too stretched when riding. The bike I had was a 54cm and I had plenty of stand-over clearance but the longer top-tube left me stretching for the bars a bit. No more than on other bikes though. I think I just wanted something more upright from this bike, given the rest of the chemistry. I pushed the seat forward and raised the quill stem and all was forgiven. As a guide, I’m 165cm. I reckon the 54cm Chappelli would suit anyone of my kind of medium stature (I’m not short okay!) and could be comfortably configured for riders a bit taller or slightly less medium (ahem) statured. 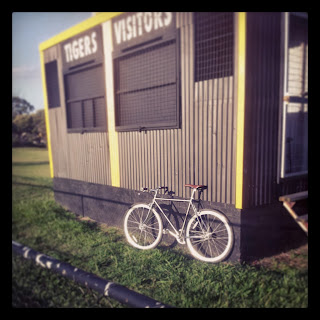 Evolution. It’s the reason we’re riding bikes and monkeys are still swinging around in trees. Stupid monkeys. (Unless you like swinging, then, well, stupid humans.) Problem with evolution is it’s quite random and you inherit stuff you no longer need. The Chappelli has a pair of vestigial rack nibs at the top of the chainstays. I like the idea of rackmounts and even mudguard mounts on bikes. (Hey, I know mudguards are daggy but I grew up in a wet climate and if you wanted to commute every day it meant getting wet real often. There’s nothing cool about a wet sagging arse hanging in your pants.) The problem with these vestigial nibs is that they have no counterpart mounts for the bottom of your rack. It’s nothing a pair of p-clamps couldn’t fix but it does make me wonder why they’re there. (Probably, there’s some rack that attaches without the need for bottom mounts and I’m too stupid and naïve to know about it. Please send all correspondence to the editor.)

The Chappelli is not a lairy fixie for the fixie purest. It’s a stylish and accessible bike for those who want the simplicity of a single speed without the fixie-type hang-ups. I never rode this bike as a fixie because it seemed that this wasn’t really where the bike was coming from. I’d hate to damn the bike with faint praise by praising its sensible nature but if you’re being pragmatic and want a sensibly configured commuter with some understated fixie-type cool then you’ve found your bike. The bike has some class though, and that has to be mentioned, from the Chappelli stamp on the forks to the understated yet classy color combo and matching leather seat and grips. If you want to show some style, but not in the shouty way, them check out the Chappelli.