Skip to content
Can one of you dickheads please apologise to Barry. He was nearly run over by a cyclist today. Any cyclist will do. We all know we’re all the same. Just put your hand up and say sorry. 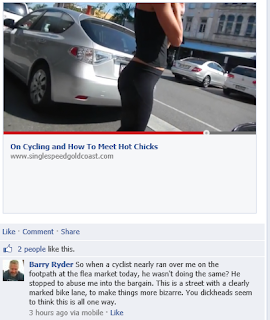 No wait. I can’t trust you guys to say it properly. You know, with feeling. I’ll do it myself. Barry, I’m very sorry the cyclist nearly ran into you. I’m sure, had the cyclist been traveling faster and not paying attention, they might have almost come in contact with you. And you might have got all shook up and needed a moment to compose yourself.

Of course it’s totally legal to ride on footpaths in Queensland so the cyclist wasn’t breaking any laws I’m aware of. But they nearly ran over you. And for that I apologise.

I nearly died of skin cancer a couple years back. Nasty scrape that one. Melanomas have a very high fatality rate you know. Of course, mine wasn’t a melanoma. And mine was removed in day surgery.

Another time I nearly saw a UFO. Turned out to be a blimp all lit up from the inside. Nearly though huh?

What worries me most about Barry’s incident is that the cyclist almost ran over him. Not into him. Over him. Right up and over him. Bazza wouldn’t have stood a chance. Not sure how Barry knew the cyclist was going to ride over him but Barry looks like a pretty good judge of character and I’m going to trust Barry on this one. Besides, this is Barry’s apology. He’s almost been mistreated by a cyclist and I don’t think this is the appropriate time to be second guessing what this poor (almost) wounded man does know or doesn’t know. 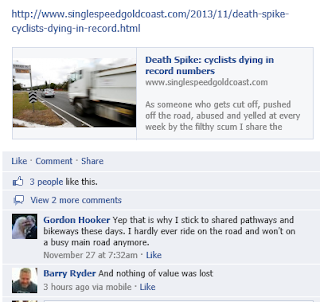 It’s probably Barry’s almost very possibly if everything hadn’t been different accident that has shook him up such that he wrote such hurtful words about people who were tragically killed. Barry equates his (almost very nearly) trauma with the very real trauma of losing a loved one. That’s why he refers to these deaths with the comments, “And nothing of value was lost.” And  I totally sympathize with Barry. In light of his (probably not very) close shave he’s reacted with an understandable level of hatred. In the same way our grandparents came home from the war with a hatred of Germans after having been bombed and shot at for years and years on end. In that way. That’s how Barry’s (imaginary) trauma has effected him. We’ll forgive his blind bigotry because this is his apology. Sorry Baz. Hard cheese fella.