Skip to content
I sometimes wonder about the futility of cycling. Why spend so much time and energy on something of no value and almost no purpose?

Not commuting. Commuting is faster and better than driving in most place. In that respect I wonder about the futility of cars. And I love riding past them stuck in traffic by their thousands and making mooing noises at them. That’s an exercise rich in purpose because it makes me feel better about myself by running down the dull bovine-like masses lining up in their tin boxes. Disparaging others is how I fill up my shallow sense of self-worth and keep myself going. Nothing futile there at all.

Training rides. Training for what? The peak oil apocalypse? Will Ahad the Arab and Tex the Texan one day inspect their respective oil wells and declare we done run out of oil? Will people run around in a panic (for three or four minutes before they get all wheezy and need a sit down) not knowing how to get down the shops for more fried chicken and (diet) coke?

Will a massive solar flare take out electronics, our computers and phones dead, all transport grinding to a halt? And we’ll declare, “This is just what I was preparing myself for?” (Pity for those Crossfit people, as if their fancy fucking chin-ups are going to get them anywhere in the apocalypse. Maybe you shouldn’t have driven that massive SUV thing down to the gym every day, Crossfitter.)

Sometimes I don’t even enjoy it. The riding. I’ve had the road bike out lately (because the mountain bike is properly flogged and needs a new everything yet again) and to be honest the idea of riding up and around some hills in the back-blocks of the Gold Coast, fighting through traffic and crappy roads filled with cartards after a day at work, it doesn’t thrill me. At times the apocalypse wont come soon enough. I almost always enjoy it to some degree but there are inevitably moments when I’m jealous of people who feel no compulsion to do these things.

My neighbour, he gets out the lawn mower and the tools and makes himself handy. His house looks great and he’s probably added a million dollars to it (seasonally adjusted figures) with his renovations. Meanwhile my list of urgent repairs just grows.

Not that I’d ever mow a lawn. Now there is a form of futility that takes a special kind of delusion to embrace. The swearing at the lawnmower, the dog shit sprayed on the shins, inhaling two-stroke fumes…all for a little strip of green.

Of course, maybe I’m not doing it right…

Are they some massive battery packs strapped to that bike or is this the world’s first electric assist suicide bomber device?  (“I’m off-setting the carbon emissions from the explosives by using green energy suppliers. That’s how we keep the jihad carbon neutral.”)

Do you know there are Christians in the US who buy school buses and shit for Jews in Israel because they think it’ll bring on the apocalypse. Even though they don’t really like Jews. Jews are just Christians who haven’t realized how cool Jesus is.  He’s the Messiah already! 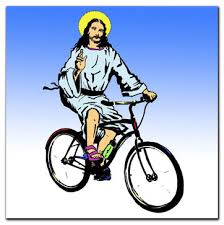 Their logic is simple. A little too simple perhaps. They think that the state of Israel is one of the conditions written in the Bible as a precursor of the apocalypse. The 2nd Coming. The return of the Messiah. So they buy school busses for Jews on the other side of the planet because they know the Lord will come back and smote the fuck outta them for not believing in His son. But only once the conditions laid out in the Bible have been met.

No doubt the Lord also habours a special grudge against unbelievers and cyclists. Of which I am both. In the first moments of the coming all cyclists will go up in a big smoting and the Lord will replenish oil supplies and clean our air and give all the sainted cartards a second chance to fuck up His planet. Then he’ll drive off into the sky in his celestial stretch Hummer. That’s exactly how it’ll happen. Because the Lord will value most those who have ruined his planet, who burned a million years worth of fossil fuels in two generations. The Lord will protect and nurture the V8 driving cartards. Just so long as they went to Church and preyed to him in just the right way.

It’ll be interesting to see just who gets saved when He returns. With so many religions to choose from, all of them the one true religion, it’ll be fun to see who are the winners and losers. And just how petty is the Lord? Will he smote the good people just because they didn’t prey right? “Hey you Presbyterians, so very very close. The Proddies got it right. Sorry but you guys burn in hell. With those filthy scum, the cyclists.”

Of course, according to at least one prophet, Jesus wont return while we’re taunting him with all the crosses…

Futile. Believing in nothing. It’s futile. Life without purpose is a purposeless life. So we have to believe in something, surely. Even solipsism. (My problem is solipsism, if all these people only exist in my mind, then why doesn’t anyone ever agree with me? Why did I invent cartards, suicide bombers and Miley Cyrus?) But just what can I believe in (now that Armstrong has fallen)?

Nothing. I’ll embrace nothing. Nothing is real and the world has no value. Or, more importantly, everything has value, but only the value I give to it. Friends have value. Good food has value. Kindness has value. And fuck it, cycling has value. In a futile world even the futile has value but only if you believe it. And cycling is definitely futile.

In a society whose dominant (Christian) beliefs have been so twisted that Easter is celebrated with chocolate and at Christmas we celebrate His life by stuffing ourselves full of food and beer and complaining about the heat (yes, heat you poor northern hemisphere readers…I’ll be on the beach Christmas day), it makes sense to believe in nothing. So when you’re contemplating what to do over Christmas, something useful or maybe slip our for a few hours for a ride, remember that life has no purpose and therefore one act is as futile as the other. In other words, you may as well go for  a ride.

Now let us prey to our Chocolate Jesus: