Skip to content
If bikes were invented today they wouldn’t be allowed on the road. So says Michael Pascoe in his article Regulate Bicycles Off The Road. It’s dangerous to ride bikes because cars are large and fast and almost every incompetent, inattentive moron is allowed to drive one. Therefore the bikes should go. 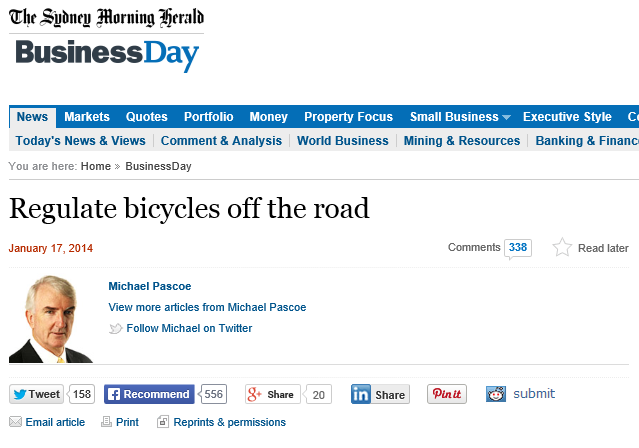 Bikes weren’t invented today though were they. They were invented many years before the car came along and  made riding them so dangerous. So that makes Michael sound like one of those whiny windbags who move downtown to the groovy area and then petition their council to have all those terribly noisy music venues shut down.

Michael’s attitude perfectly reflects the growing selfishness and sense of entitlement you see in cartards these days. They’re annoyed that they have to share the road with anyone. Especially those life-forms low enough to consider riding bikes.

Riding is a bit like smoking. Well it’s not really. Michael compares them though. If smoking were invented today it would be banned. I don’t know if Michael has checked the cost of smoking lately but you practically have to sell your kids’ livers on ebay to buy a pack. You know what I mean? It’s not exactly encouraged. Cycling on the other hand is something government spends money on. They seem to actually quite like cycling.

The big difference between cycling and smoking is that smoking promotes disease and cycling prevents it. With 70% of Australian men overweight or obese they should be handing out free helmets and getting RMIT to design a special bike to accommodate their fat arses. It’d be more useful than that Superbike they made. No place for shopping on that. Maybe they could put a basket on it. And stuff Michael in it. 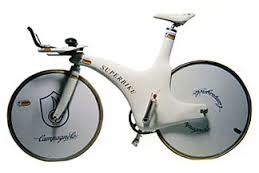 Bikes weren’t so much invented as they evolved. Cars the same. Bikes have evolved into the most efficient way to get about ever known to man. Miles per calorie expended the bike is unbeatable. Cars on the other have evolved into the single least efficient way to get about ever invented. We’re driving down the shop in a vehicle that could drive around Australia, with five passengers, pulling a caravan. How such a beast is allowed to roam our suburbs is difficult to understand. How people feel no guilt in using this beast to transport just them and a litre of milk a few hundred metres to the shop and back is difficult to understand. It just evolved that way.

You know those calories we’re consuming per mile? The bike calories are coming off your waste-line. Car calories are dredged up from ancient deposits of carbon. When burned and released they contribute to greenhouse gasses. I don’t want to startle anyone but we’ve got this thing called global warming. I know, shhhhh. You’re scaring the cartards. Here’s a sneaky peak at Australia’s mean temperatures: 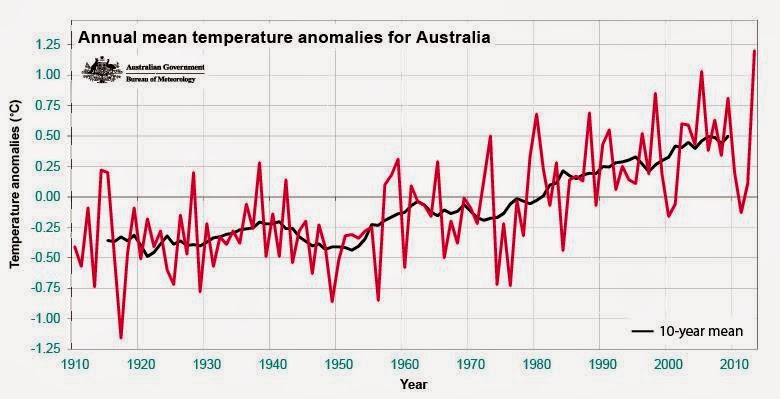 Can you see a trend? According to the overwhelming majority of informed and learned scientists this warming trend is from greenhouse gases like the ones cars emit. I know there are dissenting voices, like your Uncle Harry who read once that it was all nonsense, and John Howard who relies on his “instinct”, but unless your Uncle Harry or John Howard have studied climate science or some other related field and they’ve spent decades studying and understand the data then they can shut the fuck up okay? I’m prepared to admit I studied IT rather than climate science and I’m therefore going to have to rely on the almost universal support for the evidence that suggests our climate is heating up at alarming rates and we’re doing it and it’s because we’re too lazy to get out of our idling cars while we buy hamburgers and thickshakes at the drive-through counter.

Climate change is definitely the gorilla in the room. You can’t have a reasoned and sensible argument about the future direction of transport without acknowledging the possibly catastrophic results of following one direction over the other. (Please don’t tell me fuel cell technology or batteries will save cars. That’s like spending all your money and arguing that you’ll pay your bills later because you’re going to win the lotto.) My argument here is, regulate bikes off the road at your own peril. We’re shitting in our own nest and we should be old enough and smart enough to know it. And yet cartards just keep arguing for more cars.

The world used to be such a friendly place. (That’s bullshit really but it’s a quaint notion.) I remember fondly riding to school with my mates. As we got closer to school more of us would meet and we’d arrive in clumps of cyclists. Roads accommodated cyclists and even as a ten year old I was free to ride several kilomteres each way. (Either that or my parents were too lazy to drive me in their SUV…though the SUV was in fact a Datsun 180B because really large and obnoxious trucks didn’t exist for personal transport back then.) Now we have people arguing that bikes should be regulated off the road. So what do you do? Give every child a license to drive a Chery J1? Or they don’t go out any more? Is X-Box and Facebook really going to replace real life?

In Michael’s article motorcycles come off quite lightly. He mentions how dangerous they are but they’re largely okay because motorcyclists wear appropriate protection. Motorcycles also travel at 100km (and many of them considerably faster…I know, I used to own one). Ever seen a cyclist tear off an arm or a leg in a stack? No? Well motorcyclists do. My friend who works in the accident and emergency department at the Gold Coast hospital sees motorcyclists all the time. Their twisted ankles are bolted back together or amputated and they’re given appropriate occupational therapy and physio to help them walk again. Cyclists don’t feature quite so prominently. She rides to work every day. I doubt she’d motorbike to work. Not after what she’s seen.

Like most cartards Michael’s so out of touch with cycling he doesn’t remember how it works. I stacked my bike the other day. I was mountain biking and the front end washed out. I have a bruised knee. That’s how it works. Unless some dickhead cartard is too busy texting to understand he’s not meant to drive in the bike lane I’m usually pretty safe both on and off road.

Bikes don’t crash into barriers and tear people to pieces. Doesn’t stop Michael preferring motorbikes to bicycles. I would suggest it’s because motorcycles don’t hold him up in traffic. Those few precious seconds it takes to slow down and wait for a safe moment to overtake a bike, those are the few seconds he regrets. Cartards spend most of their life stopped at traffic lights but doesn’t stop them blaming cyclists for slowing them down. 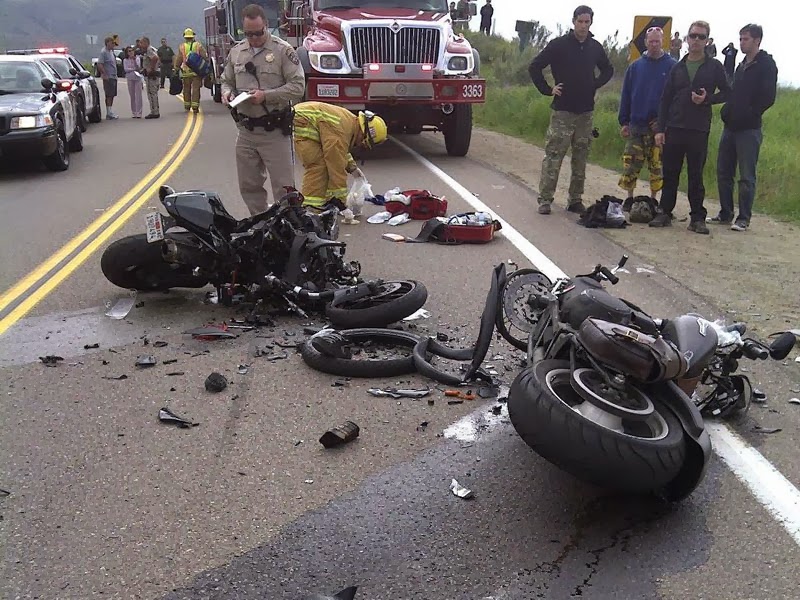 (Google “motorcycle accident” if you have a strong stomach. Many images are too gruesome to post here.)
That cyclists aren’t the problem on the roads is something of an inconvenient truth for Michael and like-minded cartards. Just like climate change. (Ah, so that’s why Al Gore’s doco was called Inconvenient Truth.) I don’t think I know a single cartard who believes in climate change. They’ve all hacked out a comfortable niche as climate change deniers based on not one single shred of evidence. Or they hang onto bullshit like the one about volcanoes spewing out more carbon in one day than cars do in a year. (There was actually a net drop in carbon emissions during the eruption of Eyjafjallajökull volcano because it stopped air traffic. They look impressive but most of the stuff you see pluming into the air is ash and steam. The notion that it’s all carbon emissions came about because cartards will believe any nonsense that agrees with their point of view and ignore all the science to the contrary.) Now cyclists are inconvenient and cartards run petty and spurious arguments against them like those from Michael Pascoe. Maybe it’s time these people started being adults and took on some responsibility for their actions.

In regard to the inconvenience caused by cyclist, Michael does say, “traffic that tends to already be inconvenienced enough.”. He is at least acknowledging that cars stop for stop signs, red lights and general congestion caused by all the other cars on the road. I can tell Michael that the average speed for traffic in Sydney can be as low as 26km/hr (along Victoria Road). Now I don’t know about you but I can comfortable zoom along at 30+km/hr. In other words, it’s not the bikes that are holding up the cars, it’s the cars that are holding up the bikes. It’s something that almost every cyclist knows, that commuting across town in just about any city in the world is faster by bike than by car. And that’s despite the presence of so many cars blocking the way. 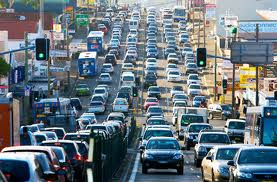 (I see the problem. There’s a cyclist way up ahead!)

What Michael’s telling us is he’s being inconvenienced by all those traffic lights and stop signs and give way sign, and let’s not forget the thousands upon thousands of other cars, and now the cyclist is just about popping his cork. Sadly, removing cyclists from the road will make his problem worse rather than better. Cyclist are only a very tiny part of his problem. The real problem is all the other people in cars. Cartards find it hard to look within themselves for the answers so I can’t understand his complete lack of insight but I can tell him emphatically this: more cars is not the answer.

Of course, Michael carefully wraps his obscure and convoluted anti-bike logic around sentiments expressing concern for the cyclist. He’s concerned for us. We’re getting hurt out there people. That’s why he wants to remove our freedoms. His patronizing crocodile tears might even convince me if he expressed similar concerns for motorcyclists, pedestrians, skateboarders and those old dudes who drive their mobility scooter straight down busy roads. Nice try Michael. It’s the single best weapon in the bigot’s armoury, make out like the whole thing comes from a desire to protect your enemy. (You know gay people have a right to do whatever they want in the privacy of their own homes, I’m just very concerned that the sphincter isn’t built for this type of activity and what they’re doing, by being unnatural, will lead to disease…etc. That kind of thing.) Here’s an idea Michael. Get stuffed. You don’t like us and you should say it. I’d have some respect for that. I have friends who say it to my face. It makes me cranky but I don’t stop liking them. (Not altogether…Jamie!) Sleazy habits like Michael’s though, pretending he gives a toss while he advocates removing our right to ride a bike, is a bit sickening. I’m sure every adulterer tells his wife how much he loves her.

We love you too Michael.