Smart phones have an in-build everything and you can do amazing things while the battery lasts. I used the GPS the other day. It recorded half my journey in amazing detail.

Now we have smart watches to go with our smart phones. The big deal with the smart watch is you don’t have to take your phone out of your pocket to see who is calling. Or the time. What amazing advances we’ve made. If you bought the first generation of smart watch from Samsung you got almost a full day before it went flat. Not that that matters. Your smart phone was dead two hours back.

But smart phones and smart watches aren’t nearly enough smartness for the smart folk in our community. If reaching into your pocket was a bore then extending an arm and sliding back a sleeve is just as tedious. What we need is a smart phone thingo for our cars.

I work in a tech company. In fact I own a tech company. I like good tech. Like this new fangled typewriter I’m writing this on. But when one of my staff got all animated the other day about smart phone technology in cars he quickly looked at me and realized his mistake. Oh oh, here comes the rant. He pulled himself up so I held back too and we laughed about how we’d nearly sent the old geezer off on one of his mad spells. But we both knew it’d been a close call. I mean, smart phones in your car? Just how many pedestrians and cyclist do you want to kill before you realise your car is not meant to distract and amuse you? It’s meant to get you from A to B in the slowest possible time while joined bumper to bumper with other cars.

I read that industry experts have warned that Apple’s new CarPlay bullshit for cars could be dangerous. You reckon? Did we need an expert to tell us that? Well yeah, we did. Because even though people know it’s wrong to have a big attractive touch screen to distract them while they’re driving they’re so super keen on having a big touch screen in their car to distract them they’ll wilfully believe any kind of industry crap if they have to. Bullshit like this:

iPhone user always want their want their content at their fingertips and CarPlay lets drivers use their iPhone in the car without distraction.

Without being distracted from what? From driving? Or texting? 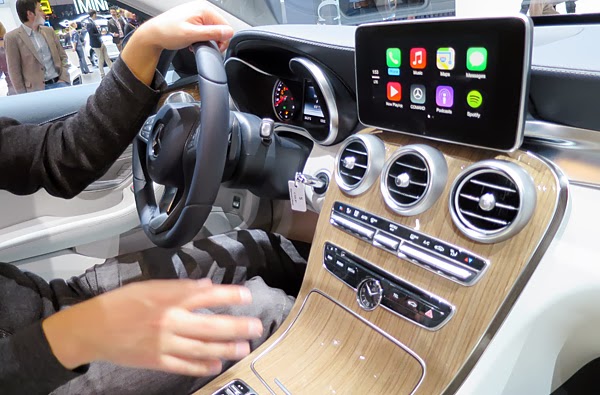 Mercedes want to put CarPlay into older vehicles. Because there’s nothing a beautifully engineered auto needs more than a cheesy touch screen display.

My first car didn’t have a radio. And it was pure torture. Being alone in a small cube without distractions is not my idea of fun. It’s why they use it in prison as punishment. As though being bullied and sodomized by the other inmates isn’t bad enough. When you need special punishment you need to be removed from those dangers and kept in a small cubicle alone. Like driving but without the scenery. So I’m not advocating a completely distraction free driving solution. Lest we call go stir crazy.

But there comes a point at which you’re no longer really responsible for the principle function of guiding the vehicle safely through our streets. That point occurs when you get a smart thing in your car and you start choosing from a Pandora of radio stations while you keep up with your tweets.

According to Apple, Siri has already helped with car safety by allowing us to dial with our voice. (Or sending incomprehensible texts, like my staff member does. When he gets back to the workshop he translates it for us.) Lauding Siri for safety sounds a bit like Fruit Loops adding extra folates and telling us it’s solving nutrition problems. When some drivers can’t even see a cyclist wedged in their own window it’s hard to see how Siri can help driver safety. Just because they didn’t dial the number while sitting at the traffic lights doesn’t mean they’re not having a conversation on a phone.