Skip to content
When the Parisian air gets so thick you can chew on it, what do they do? Well they ban cars of course. Not altogether. On alternate days in an odds and evens scheme.The Parisian air is thick with the kind of particulates that are known to cause cancer. If you have respiratory problems such as asthma it can be dangerous and perhaps fatal to be inhaling this stuff all day. Something had to be done and with cars being a major contributor it made sense to start there.

The reaction from the Parisian cartards was predictable. It’s not us, you can’t do this, it’s not fair. The Automobile Club Association reckon the laws are hasty and ineffective. They said,

Once drivers are being targeted even when heating is even more polluting, but no one is asking for heating to be used on alternate days.

They got one thing right. The laws were hasty. When you can’t fucking breath you have to do something. And urgent. But heating? Really? More polluting? What…are Parisians all using kero heaters still? I know they’re a strange mob, with everyone wearing berets and eating those strange long rolls with pate in them, but are they still lighting wicks  to heat their houses?

There are problems with banning heating. The biggest hurdle is it’s not enforceable. Heaters don’t have registration and they’re not driven around town. Are Gendarmes going to knock on every door in Paris to check heating? Given their penchant (a French word no less) for rioting in the streets in France you want to keep your police where they’re needed most. In the streets. Not knocking on old Mrs Beaujolais’ house berating her for keeping warm.

The cartards are clearly desperate when they suggest heating is the problem. You might not realise this, because you ride a bike, you get hot when it’s hot, cold when it’s cold, wet when it rains, but the average cartards hasn’t experienced the elements in so long they’ve become virtual concepts. Much in the same way ideas of “truth” and “honesty” are for politicians. Cartards move from one controlled environment to another and back again without ever knowing what it’s like to feel real weather. They’re the kind of people who complain when they don’t have a garage door that opens directly into the house. And they’ll move house to get it. Oh they’ll tell you it’s about the kids or the shopping or some damned thing. If there’s one thing cartards are good at it’s rationalizing. They always need things for good reasons. They need an SUV because they’re going camping one year (but it never happens). They need a bigger car because it’s not safe driving in a small car (but they never read the ANCAP information). Now they need a new home because walking 5 metres from the garage to the house is miserable for the kids (who play in puddles anyway).

In theory cartards can do without heating. As a virtualized concept it sounds more appealing than doing without cars. In practice they’d realize this means being cold and go looking for other alternatives. It’s the TV’s fault. But of course cartards experience life through their TV. Take away their TV and their pathetic lives, without risk or experience, become hollow and hopeless. And on and on they’d go in a spiral, blaming everything except themselves and their precious cars.

As is often the case, the worst thing you can do for a cartards is give them what they want. They won’t admit they’re selfish and mean and willing to let other people suffer and die so they can drive. But their spiralling logic is their own worst enemy. It’s the same with all the roads they’de have us build, and the bicycle lanes and public transport they’d dispose of. Soon everyone would own a car and the roads would be gridlocked. But for a cartards the answer to too many cars is always more cars.

Apparently conditions are improving and the vistas of Paris are returning to scenes reminiscent of the image I provided above. Parisians can get back to doing what they do best: wearing berets at jaunty angles, smoking gitanes and eating baguettes. And rioting. 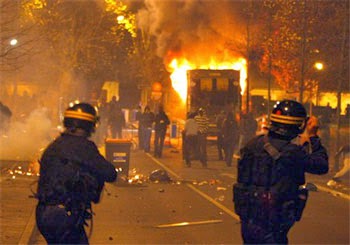