Skip to content
When your own transport department has figures showing you how effective bike lanes are, what do you do? Well you cancel all bike lane projects of course. And then you propose a scheme to license bike riders. Or you would anyway, if you’re from the crumbling and corrupt edifice of the NSW government.
For those who aren’t familiar with the great works of the NSW conservative coalition, they’re the ones whose leader recently resigned. He was close buddies with a guy so tarnished with corruption you’d go to great lengths just to prove you’ve never breathed the same air. I won’t give you the full details here because it’s impossible for the average human to unravel this mess, let alone me with my meagre intellect. It involves both major parties, some mining leases, who knows what else, and lots of money from “lobbyists”. The Premier, Barry, resigned because he couldn’t recall the details of a bottle of plonk his mate gave him, a $3,500 bottle Grange. Bazza faked too many details and tried too hard to pretend he didn’t know this guy and when his personal handwritten thank-you note was revealed, along with the phone records showing just how chatty the two were, it was time for Barry to fall on his sword and pretend it was all a misunderstanding. You know how it goes: never admitted he did anything wrong, stepped down because he’s a good bloke and all that and some people might have got the wrong opinion about his lapses in memory.
Since then the Police Minister has resigned and it’s perfectly obvious there’ll be more blood on the floor before the hearings are finished.
Now you know a little about the dickheads who govern NSW, let’s take a closer look at what they’re doing for cycling.
The previous mob who governed NSW (who were just as corrupt by the way, indeed the main man behind all this corruption, Eddy, came from that side of politics — he opened up a giant cookie jar of dirty money and neither side could keep their hands out of it) started building and planning bike lanes in Sydney. For those of you who don’t know Sydney, it’s one of the most beautiful cities on earth, but a bugger to get around by bicycle.
For some reason conservative politics hate mobility. They despise trains, are annoyed by buses, will chop up bike lanes and remove T2 and T3 lanes. (T2 lanes are where you need at least two people in a car to use it. T3 three lanes are…well you know what T3 lanes are.) Our local council and state governments went conservative last year and promptly removed all our T2 lanes. They must be too efficient or something. If traffic starts moving freely they wont have excuses for building more roads and their mates in road building corporations will get angry and the kick-backs and “lobbying” will grind to a halt. Imagine a life without corporate boxes at the footy and the races…that’s a life without road building for you.
Anyway, when the conservatives took over NSW and started running it for their own profit they also cancelled plans in place for future bike lanes. Sure, cyclist are getting killed on our roads in record numbers. They’ve already shed their crocodile tears for the fallen cyclists. And then they proposed licensing cyclists. Because, you know, they’re concerned about cyclists welfare and stuff. And because a license will provide some kind of prophylactic against negligent and aggressive drivers.
It’s common for governments to attack cyclists while maintaining a patina of pretense for helping them. Witness the laws introduced into Queensland recently requiring cars to give us the proper space when they overtake us. Thanks guys, all good on the surface. It came with an admonishment about cyclists needing to uphold their end of the bargain and follow all road laws. Then Cairns police set the tone by setting up a blitz in which they fined over 80 cyclists and couldn’t find a single car doing anything wrong. Those angles. Our local Gold Coast police have admitted they don’t know how to enforce these laws and so they too have have done the only thing they understand, pulling over and fining cyclists for trivial offences.
The cycle license idea has forgone that patina of respectability and is just wantonly anti-cyclist. I’m sure Duncan, deputy leader and roads minister, will spin it with some tortuous logic that makes it sound pro-cycling, if you tilt your  head a certain way and remove any vestige of common sense from your brain, but the idea is and always will be an attack against cycling. According to Dunc, too many cyclists are dying on our roads, so if you put up barriers against cycling…well I guess you’d remove cyclists from the road. Dunc hasn’t followed his thought bubble through to any conclusion so I can only guess where he’s headed with it.
Given that you can ride a 50cc scooter in half of Australia (not NSW though) with a regular car license you have to wonder why Dunc wants NSW to be the only state (in the world!) that requires you to have a license to ride a bike. Or at what age you’d need that license. Or how you’d police it. Or just how you’d figure in kick-backs from your favourite cycle lobbyists groups. Of course, cycling’s real problem is the pitiful quantity of revenue it generates. As a form of transport it’s too cheap and efficient to interest most governments. And that’s why dickheads like Dunc will always be around to attack it.
The great thing about this debate is that the Sydney Morning Herald has obtained figures from the NSW transport authority proving just how successful the cycle paths have been. According to that report, bike paths move more people than the roads beside them. There’s even this wonderful info-graphic, so it must be true: 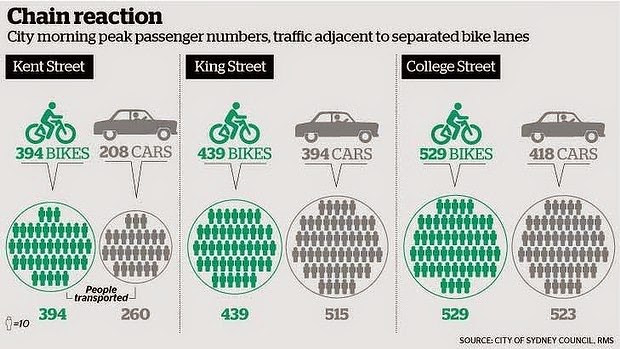 The government’s own figures prove that cycle lanes are working. Moreover, they show that the cycle lanes doubled the amount of cyclist while reducing injuries. Besides my recent experience where I rounded a bend and found a car driving toward me, I find cycle lanes a pretty safe place to cycle. You’d doubt the need for special figures to prove this but Dunc is a “bike lane sceptic” and even after the perfectly bloody obvious is pointed out to him he’ll probably still be against it. No doubt if the cycle lobby could drop off $3,500 bottles of Grange to his door and invite him to fatten up in the cloisters of the members stand at Randwick he’d consider changing his opinion. In the meantime he’s unlikely to care for such things as reliable figures, logical conclusions or anything resembling common sense.