Skip to content
One of the necessary conditions for a bike culture to flourish is an absence of bikes. If everyone is riding bikes then you can assume that most of them are doing it because they have to. Soon as they can afford a car, hoverjet or motorized steam donkey they’ll get one. Which means bikes are associated with poverty and therefore not as desirable as they might otherwise be.

This was the story in Vietnam not so long ago. Everyone rode bikes because they had to. No-one rode fancy bikes or joined groups of other cyclist and called these groups peletons. Nor did they have bidons where a water bottle might suffice or sit glued to the television late at night watching grown men in tights grind their way through the mountains of France and Spain each July.

Then one day the leaders who fought for the socialist republic took a hard look at the hard poverty around them and wondered whether, as part of their socialist paradise, they couldn’t also “liberalise” their economy. And thus the economy was liberalized.

From what I’m seen, liberalizing an economy is short hand for opening it up to the kind of rampant unfettered capitalism that no first world economy has ever attempted. Got three plastic stools, a couple bottles of drink and a spare sidewalk? Great, you’ve just opened up a café. It’s like socialists countries are swinging broadly from the “socialist experiment” to a “capitalist experiment” the likes of which capitalists countries don’t dare attempt.

There’s also another argument about too many bikes being bad for bike culture. It goes like this. When everyone rides bikes they’re no longer special, they’re normal. For instance, people say that Holland has no bike culture because bikes are too omnipresent. My counter-argument would be that every man and his dog owns a car back here and you still get car culture. Of course, you could argue that there is something especially stupid compelling the cartard to feel a close relationship with something so mundane even his grandma has one. That’s just cartards for you. (And someone should explain these guys to me.)

With the rising prosperity and gathering scarcity of bikes in Vietnam there is now emerging a bike culture. If you’ve ever seen a guy twenty kilos beyond his race weight getting aboard a $10,000 carbon Pistachio (or similar Italian or French brand) you’ll realise that bikes can be status symbols. Well it’s the same over there, except there’s no fat guys. And they’re not getting aboard $10,000 carbon Minarets (or similar Italian or French brand). They’re getting aboard a weird variety of mountain bikes, dirt jumpers and fixies. With the occasional sprinkling of expensive road bikes. Of course.

After a day or two in Hanoi, seeing no bikes other than the standard bomb-proof Chinese ones, I suddenly came upon three guys with jump bikes. They weren’t jumping them. In much the same way as a $10,000 carbon Pastrami (or similar French or Italian brand) is usually never ridden in the heat of battle up precipitous mountains, so too these bikes main function was to add style and substance to the ride. This I could tell at a glance because they had great big funny handlebars. But also mostly because they were in the middle of Hanoi.

One of the pleasures of Hanoi is seeing the flower sellers dispatch from the central flower market each morning and take their blooms all over town by bicycle. I didn’t get a picture of these sellers (though they’re on every second corner and I even visited the flower market) so here’s one I nicked from the internet:

In case you think the above photo is an extreme example then try this link.

The old quarter of Hanoi is a thriving area for locals and tourists. So you see bikes this this one below on street corners: 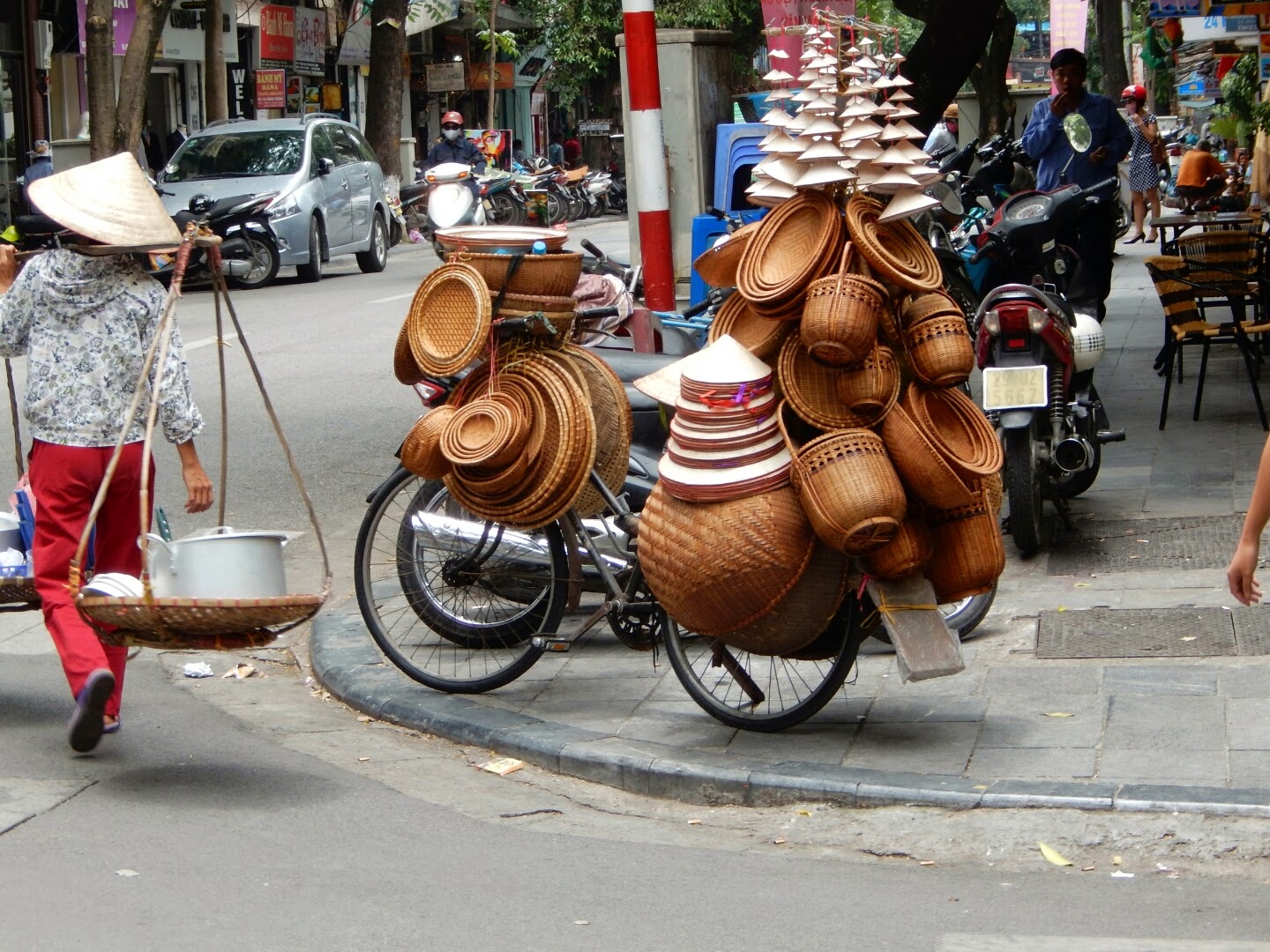 And yes I took that one myself.

Whether that bike has any transport function or merely a decorous one I can’t tell. Probably it’s like those vintage motor scooters that sit outside cafes back home. If your store doesn’t entice retro-groovsters to park their scooters in front while they sip a mochaccino (or some other abomination that’s allowed under our seemingly non-existent cafe laws) then you just buy a scooter and park it out front yourself.

I was in Hanoi briefly before flying out to Laos and then I returned back to Hanoi. The second time round we stayed on the West Lake, nearer to a friend of ours than the old quarter where we’d stayed previously. Here I saw the leisure riders come out to play. The road around the lake is one of the few safe(ish) roads where you could stroll in a relaxed fashion (if your have that instinctive vigilance that comes from growing up without footpath or, it seems, any kind of consistent road laws) or ride a bike in a straight line without dodging cars every few metres. While not conducive to doing any kind of real training that didn’t stop the locals producing all kinds of training type bikes. And mountain bikes. Mountain bikes with big arse knobbies. And touring bikes. With front racks festooned with top bags, the rider resplendent in lycra, neckerchief and wristbands, mostly seen leaning against the bike talking on a mobile phone or watching the crowd waiting for someone to notice them. They’re copying a culture they’ve had only glimpses at and while they know some of the major pointers they haven’t connected all the dots yet. Mind you, you see this back home too. Despite all the advantages of having others around them doing it right some people still insist on getting around on some device that’s so carefully crafted you just know it’s deliberate but so wrong at the same time. And they usually have a radio attached for some reason. So you can hear them coming. Often there are tri-bars, but placed up nice and high for comfort and convenience.

One place where Hanoi gets bike culture so right, and from where we’d do well to copy, is The Hanoi Bike Collective. It’s down a little back alley adjacent to the lake and then through these doors. 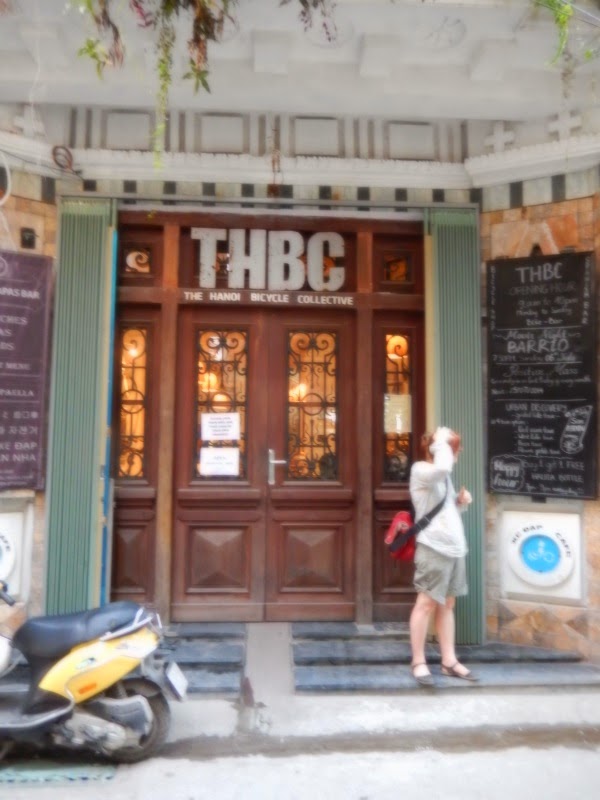 Once inside you walk immediately through a workshop area and into the bar. Now that’s how it should be done. I ordered a gin and tonic, which came in a glass almost as big as my head. Admittedly it was heavy with ice but it was about a million degrees outside so it was well received my end. 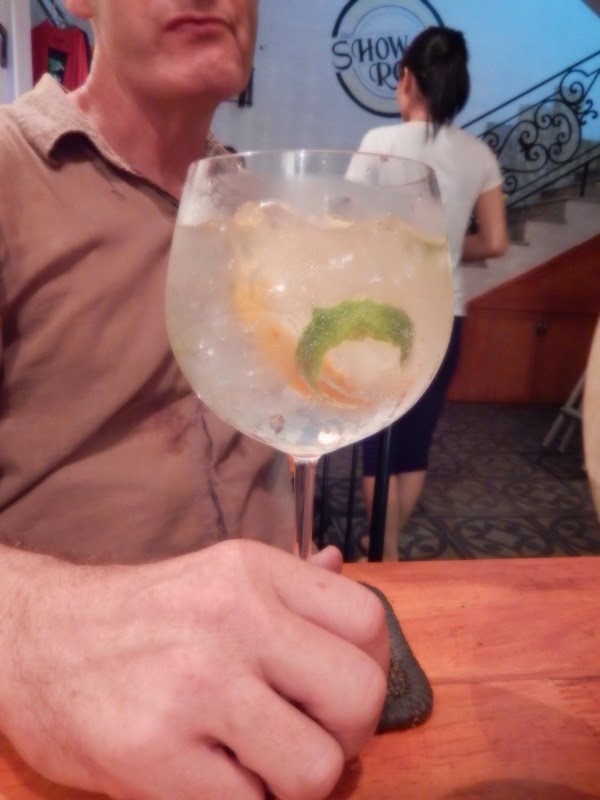 The lighting inside was moody, which I’m hoping explains why all my images are just that little bit blurred. Or maybe I’m just a crap photographer. The fixie on the wall was artfully lit: 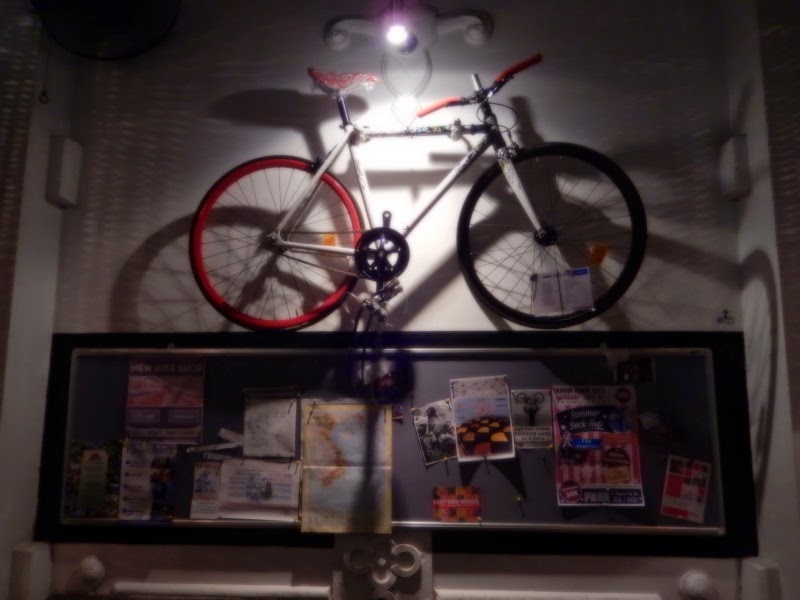 And now for a really blurry picture of the workshop area, as seen over a glass of gin and tonic. 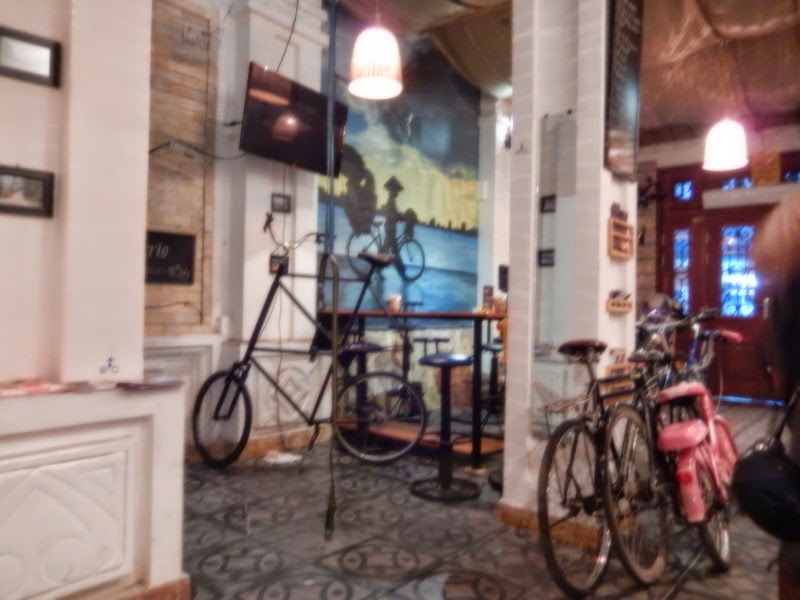 The Hanoi Bicycle Collective had themselves a cute little stencil art logo:

And upstairs a bicycle gallery: 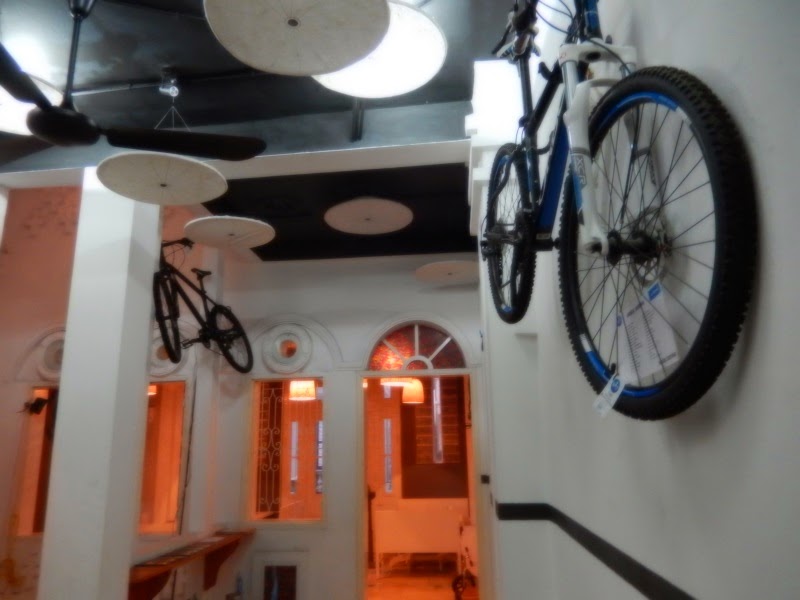 Sure there are only a couple of Orbea mountain bikes on the wall there but I think turnover for upper-end bikes isn’t as big in Hanoi as it is where you live. The Hanoi Bicycle Collective seemed to have a proper community workshop ethos, were a business but maybe also a collective to which people could belong, share tools and ideas, and then relax over tapas and beer. Bloody perfect!

The Hanoi Bicycle Collective obviously wants to be part of a mature bicycle culture. While for me conditions in Hanoi weren’t conducive to riding (it was hot even by Gold Coast summer standards, the traffic chaotic, and I’m informed that winter is cold and miserable when the winds descend off the Himalayan ranges) it seems The Hanoi Bicycle Collective has done everything right. And you get a 15% discount if you arrive by bicycle, making those fish bowl G&Ts so much more attractive.

And Let’s Not Forget Laos

The scene on the lake at Hanoi I described early could be replicated almost exactly along the foreshore of Vientiane, and probably elsewhere in the region. In both Luang Prabang and Vientiane bikes came out around 4pm, as the heat of the day wore off. In Luang Prabang it was always odd to see (comparatively) expensive bikes come out after seeing nothing but hotel bikes all day. Hotel bikes are mostly standard step-through bikes, some with smaller 24″ wheels, always single speed. Though one hotel did have these bamboo bikes: 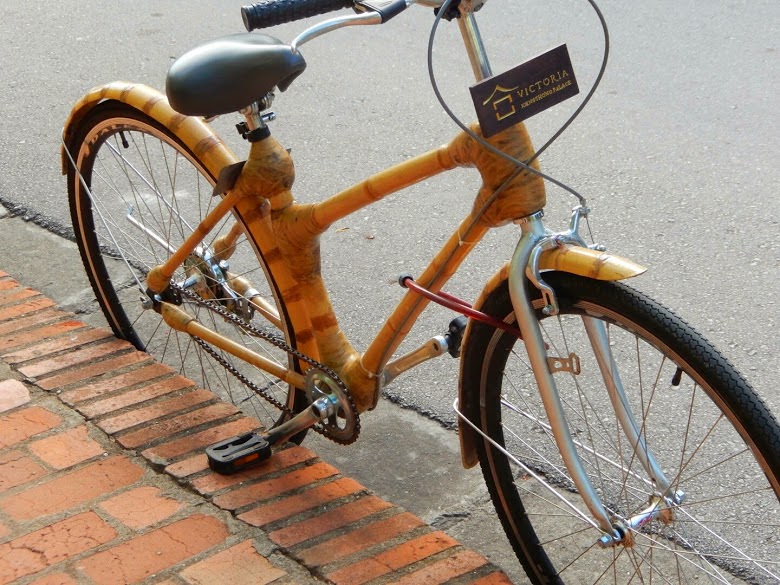 When I stopped the rider to admire his bike he seemed somewhat bored from the many interruptions to riding that came with riding a bamboo bike. Got to admire those joins. Not quite as svelte as a Calfee bamboo bike but a shit-load better than this guy.

I borrowed my hotel bike and took him up into the mountains. It was perhaps the furthest a hotel bike had ever been. Then I was lured off track by the promise of waterfalls, which can look exactly like this when they’re good: 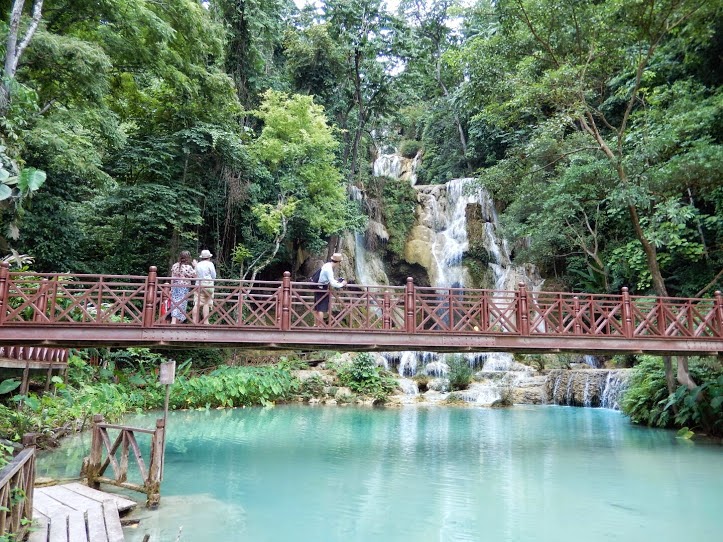 That was the waterfall I had visited that morning. Not bad huh? I assure you that waterfall is completely natural and the image is not retouched in any way. Bloody beautiful. And so much better than the forlorn trickle I cycled to.

Most of Laos is mountainous (and extraordinarily beautiful) so beyond a few trickster and wanna-be hipsters in the main towns you won’t see much in the way of a bike culture. Also, despite liberalizing their economy Laos still remains quite poor. But when you’re in Vientiane, having enjoyed a Lao barbecue and some refreshments, and you’re strolling home along the foreshore watching some local lads do 100m wheelies in both directions on their fixies, you can see how desirable is the pull of bicycle culture. And it’s interesting to see, in a country where motorbike laws don’t seem to require helmets or age limits, that bicycles are something good to be seen with, and to enjoy. As it should be.