Skip to content
We cycle because it’s fun. Or because we’ve had our license suspended. Mostly because it’s fun. But sometimes we lose focus on what it was that made cycling so much fun. I rediscovered it on the City bike from State Bicycle Co this week, courtesy of Can R Dly Treadlies.
We find ways to complicate simple acts. Cycling is one of the simplest things we can do, but we complicate with it gears, fancy clothes, training regimes and expectations. Single speeds are more free from complications than most bikes but even here we can complicate things. Remove the brakes, go fixed, steep head angles. Can’t add a rack because it’ll spoil the perfect lines of our bike, so we end up lumbering around looking like one of those guys who fought in the Falklands War. We ride too fast, conquering traffic and suffer from a terrible hubris in the process.
Well the City changes all that. The City bike from State Bicycle Co isn’t fast, it isn’t complicated and it certainly isn’t taking itself too seriously. The City is a great bike on which to slow down and smell the roses. Or in my case, the coffee.
The City has a relaxed head angle that makes for comfortable and predictable handling. It has swept back handlebars and feels just about perfect for relaxed cruising. The kind of relaxed cruising that allows you to get out of the saddle and ride it like a normal bike when required. Not like those beach cruisers so popular round here, people trying to negotiate getting out of the saddle and maneuvering the handlebars with their metre wide arc. No, the City is a cruising bike for people who actually ride.It makes for fun all round because you don’t have to concentrate too hard on the act of cycling. I’ve used it mainly for bike path wanderings and it’s here that it shines. And is most fun. My short trip to soccer hardly warrants more bike. Getting on the fixie is like firing up the Ferrari to fetch a litre of milk. Whereas on the City, weaving through the chicanes and bollards the council erects to prevent cartards from driving down the footpath is great fun. I can’t imagine how many cars would ever actually drive down our path but apparently the council thinks they’re necessary, three great bike yellow impediments right in the middle of the path, surely more dangerous than the remote possibility of a car driving down the path at you. (Oh yeah, and I write that and then realize this has happened to me recently. Anyway. As I was saying.) At fixie speeds the bollards are a bit annoying and possibly hazardous. At City bike speeds they’re an excuse for a little weaving, through the bollards, right left, across the road, left right and back on the path. I never knew these things could be fun!
The City comes with coaster brakes. These took me a little getting used to. At first I got a terrible sense of momentum when my fingers reached for nonexistent brakes as the bike rambled on obliviously. But it didn’t take more than a few minutes to adjust to the coaster brakes. We grew up with these things and practiced our skids down the bottom of the hill where I lived. It’s not hard to rediscover your lost youth on this bike and it’s not hard to remember how to use coaster brakes. Makes for clean set of bars too. 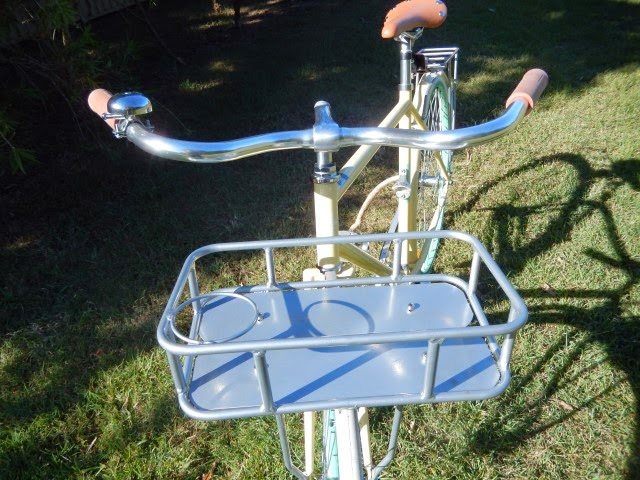 In the car park test the brake felt like it had a too much play in it. Just another example of why car park tests, like politicians and small children, can’t be trusted. Once riding, the brakes made sense. You get enough movement in the coaster brake so that you can modulate your braking. If you stomp the brake then it’ll lock up. But the rest of the time the brake has the sensitivity you need to slow and stop in the appropriate fashion. Further down the path from the bollards I mentioned earlier is a nice down and around section where the bike path dips and turns. This became one of my favorite sections as I learned to lean back lightly on the coaster brake and roll into the corner. The bike has a kind of relaxed grace that is missing from my other bikes and it made simple things like rolling through these relaxed switchbacks a load of fun.There are a couple things I’d have liked to see on the bike. I’d have liked a front brake. It’s not a deal breaker but for me it would extend the utility of the bike by letting me take it more places. Like traffic. Probably this isn’t what the bike is designed for. It’s designed for bike lane wanderings, which is what I did, and what I enjoyed. So perhaps the problem isn’t with the bike, it’s with me (as indicated by the fact I own five bikes that perform, to me, five separate functions, but which are indivisible to most people). 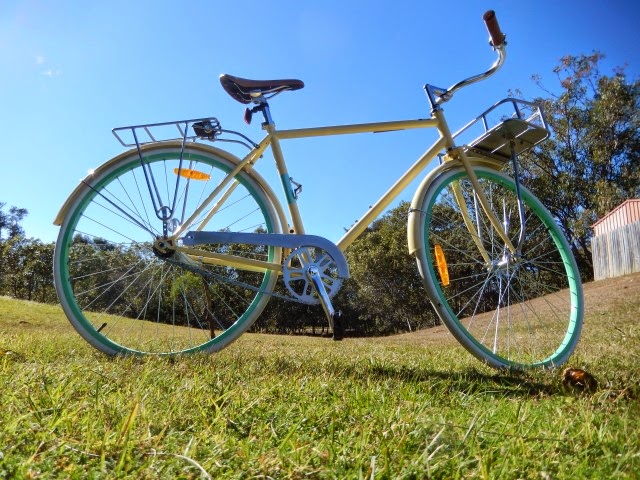 I’d also like to see a stand on this bike. That’s not the sort of thing I normally say. I grimace when I see cheap fixies with stands on them. But this bike would be great with a stand. Prop it up in front of your favourite cafe and get the coffee brewing!

One thing I’d keep is the bottle opener. These things should be standard equipment on every bike I own. What a great idea. Rarely used for sure but then so is common sense and yet we still carry it with us. (I know this because my mother checked for it so frequently before I went out.) It’s the first thing people notice on the bike (or maybe it’s the first thing I point out to them). Whether it’s knocking the heads off a few O’Brien’s Pale Ales or sipping Chinotto in the park with the wife, this thing is great. Like so many great things on bikes, it’s an affectation. But a good one. You find excuses for using it and they’re all social. It’s been years since I went for a picnic in the park with my wife. And probably longer since I drank Chinotto (but it’s one of the few drinks that don’t have a twist top you see…). 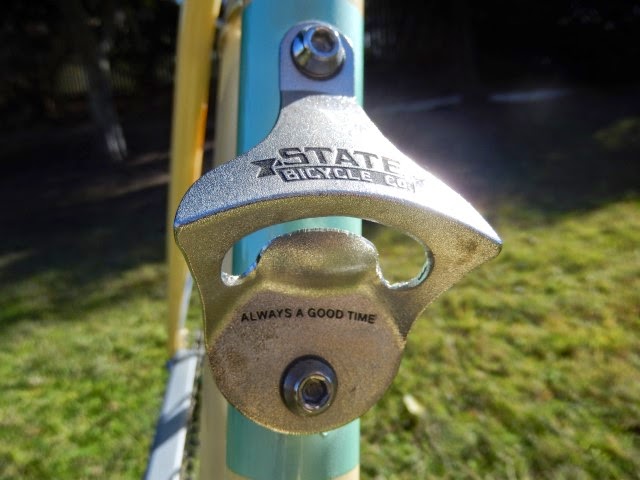 The bottle opener makes the bike a bit more masculine too. And it needs it. The frame is a nice sandy frappaccino colour. The grips and seat brown. But the wheels are a green a little too pastel for my liking. It’s not the colour I’d have on a polo shirt. They do come in other colours too, so don’t panic if you’re liking everything I’m saying here but the colours threaten your precarious sense of masculinity. 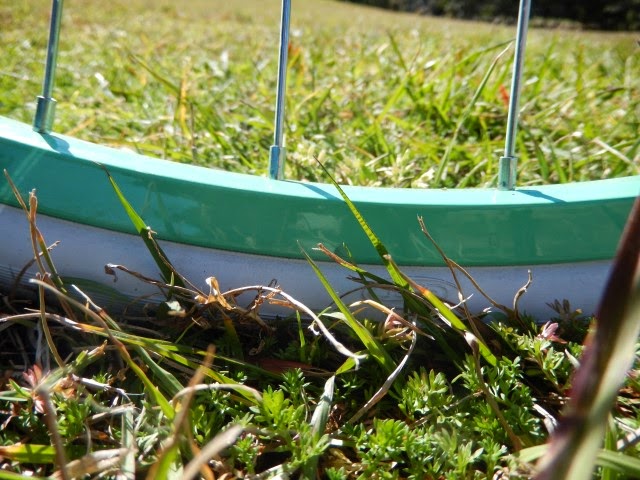 Perhaps this colour would be good in a step-through, to appeal to our female riders. They don’t have a step-through in the range, which at first seems like a bit of an oversight. My wife, who rides a Bianchi step-through, just about pushed me off the City to get a ride on it. It was only because I wouldn’t put the seat down for her that kept me from riding the Bianchi for the day. So probably having a step-through  isn’t important when female riders lay their eyes on this thing.
My wife drives a car to work these days, but her Bianchi was bought as a means to get to work when she worked closer to home. A ride of about 4kms each way, it was a nice way to get to work and back. One thing that was important to her was a decent rack. (No puns here please!) Women don’t have our misplaced sense of masculinity that sees us porting half our house on our back. They don’t like hot sweaty backpacks. The Bianchi came with a good rack so we bought her some Ron D Swan panniers and they’ve been going great ever since. The City comes with some really quite excellent panniers. If you’re going to put panniers on a bike then put on some panniers that you actually expect people to use. Also ones that are attractively built to compliment the bike rather than drag it down by their utilitarian dullness. That seems to be the philosophy behind State Bicycle Co’s choice of panniers. They’re lovely looking stainless units, solid and with strong fixtures. It looks rattle proof and should last for many commutes. 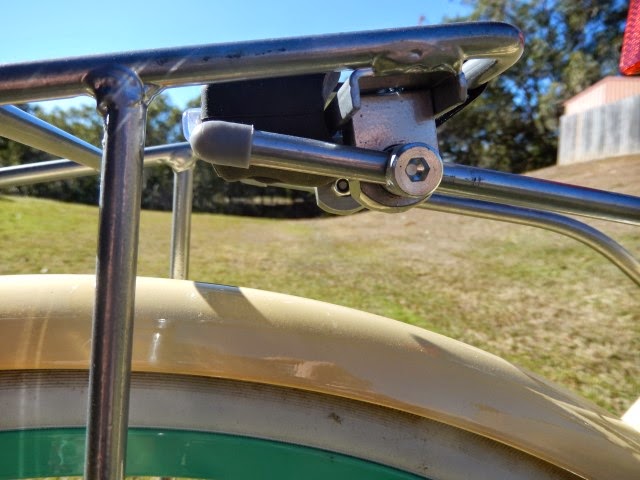 At the other ends is a porteur style rack. Well, maybe it’s a bit small to be really considered a porteur rack, but it does have a space dedicated to holding your favourite beverage so who cares what style of rack it is. 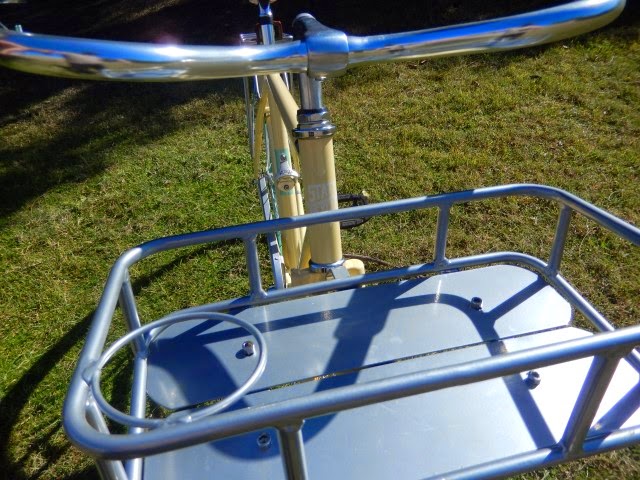 For those who are using the City to ride about in the kind of splendor it inspires (I’m seeing Boss suit, tailored shirt, bicycle cuff links) you’ll appreciate the color-matched mudguards when there’s a sprinkling of rain. They’re as well built as the rest of the bikes, with good strong looking fixtures that should stay rattle free. There’s also a chainguard so you wont tear up your best pants on Formal Friday (my wife’s idea) like I did recently. Split them to the knee. (Stupid idea.) If only I’d had the City in my possession back then. 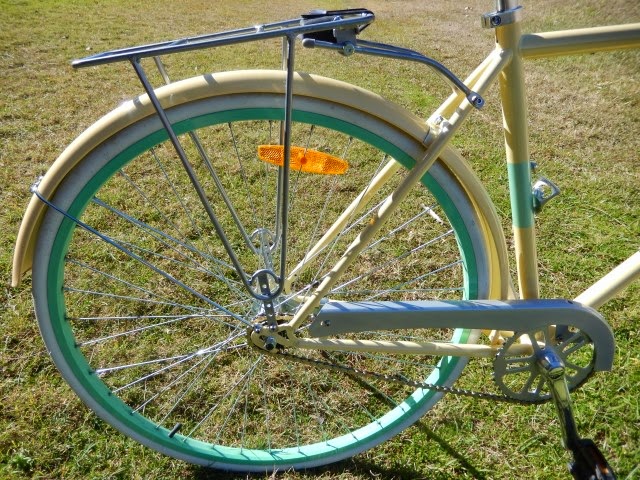 I suppose, with a bike like this, you can’t talk too much about the utility of the bike. It’s one of those bikes you’d buy because you liked it, not because it filled some niche in your tether of bikes. You’d get this bike because it made you look good and feel good. Or because it’s the only bike on the market that’ll carry and open your favourite beverage. I’d get it because it’s stylish simplicity makes even my kick-about Mojo single-speed look like hard work in comparison. It made me look good and feel good for a week and now it’s gone I’ll have to full back on my charm and good looks. And that’s a long fall.

You can get the City bike from State Bicycle Co locally through Can R Dly Treadlies.

Virtue One from from Reid Cycles
Racer from Pappillionaire