Skip to content
Whatever happened to 12″ remixes? How cool was it to have a new take on a fave song? But with more snare. And more samples. And heaps more snare. And less of that intrusive content the silly songwriters tried to put in.Something better came along, that’s what. DVD, MP3, and now we just steal content from the internet. Same thing here (but without the theft). The last Single Speed Cycles cycle I reviewed was a remix. This new bike from Single Speed Cycles is quite a departure from that one. I praised the previous bike as being the most comfortable fixie on the market. The ride was smooth and compliant. It had a cool retro look and feel about it, a vibe that would could have seen it at home in one of those cool Corona ads. The one’s where everyone is young and fit and surfing and riding. This being years before the alcohol abuse and pressures of work kicked  in.

The new bike has a much more urban feel about it. You only have to look at the black on black (with black highlights) colour scheme to realize this bike wants to pick a fight with the old bike. It’s tougher, more focused and less interested in making friends and pleasing people. It even has a cool new name, Django.

The bike isn’t unfriendly to ride though. Quite the contrary. The first thing I noticed were the touch points. The saddle, grips and pedals. I especially liked the grips, some Oury-lookalikes that were comfortable and well padded without being over padded. The new bike doesn’t have the smooth qualities of the old but with these grips you’re unlikely to get numb hands or any discomfort. (Trust me, I’m the master of numb hands. It’s like I have no circulation or something.) I have a special relationship with Oury grips (and their lookalikes). When I first discovered them for my mountain bike I loved them so much I immediately bought a pair for my motorbike (because of the numb hands thing…). Turns out that motorbike grips are different sizes, left and right, because of the throttle. Oh well. Still loved those grips.

The saddle is good enough to be unremarkable, always a good thing in my world. A saddle will usually stand out for being odd or uncomfortable. The best saddles are the ones where you don’t notice them. People can definitely have special relationships with their saddles. Some people like odd shapes with cut-aways and things. I see those on fixie sometimes and it can be a good thing or a bad thing, depending on how much your butt likes that particular shape. If you have a well shaped and padded conventionally shaped saddle you’re probably going to strike accord with most butts. That’s what we’ve got here and my butt was happy with it. 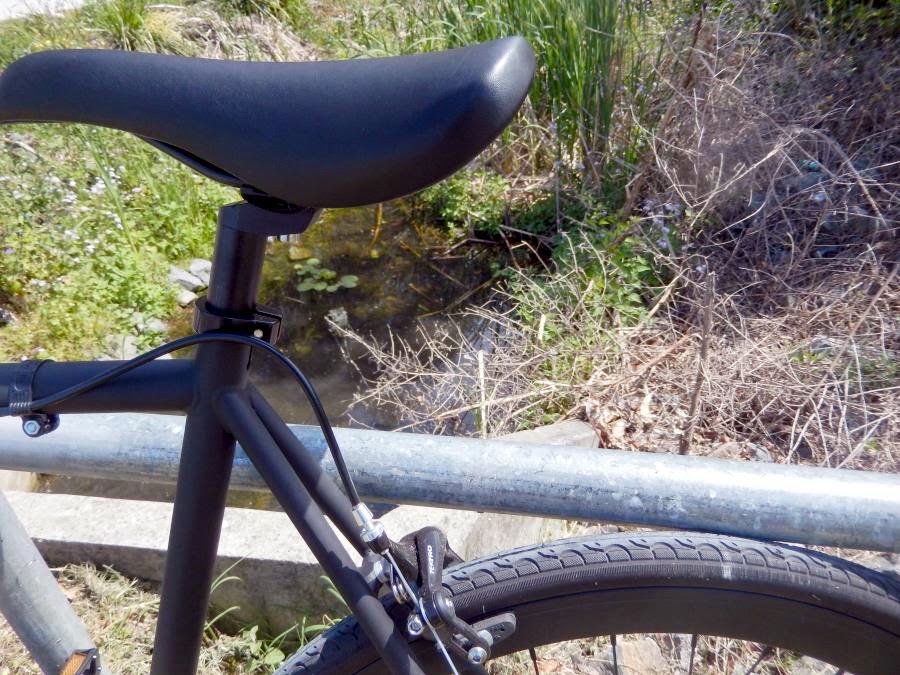 Pedals are often throw-aways but recently I’ve reviewed a few bikes that have put some thought and care into their pedals. The Django is no different. I like the flat BMX-type pedals. They’re so much nicer to pedal on than those mean little things so many bikes are shipped with. The large contact area for your foot means you can ride down to your favorite watering hole (about 10km in my case) in a pair of sneakers without feeling like you’re standing on the pedal axle by the time you get there. You can add some straps to these pedals if you’re going fixed. And they look solid enough to last you for a few years. So tick the box that says, don’t have to replace pedals soon as I get the bike. Thanks.

Smooth was nice. I really enjoyed riding the old Single Speed Cycles bike. But it’s not what I’d chose when purchasing my own bikes. Who needs smooth and whatever anyway when you can get some kick-arse straight blade forks. As much as I loved the ride of the original bike, I much prefer the look and feel of straight blade forks. As the song says, “You’ve got to accentuate the positive. Eliminate the negative. And latch on to the affirmative.” I’m not sure what latch onto the affirmative means, except maybe it’s some advise about picking teams in a debating competition. But the rest is solid advise. When I  blog I like to talk about what’s good in a bike. Last time round the the Single Speed Cycles Corsa had a class-leading smooth ride thanks in part to those curved front forks. The drive into corners never quite felt as direct as I would have liked though. The straight forks solve all that. The drive is direct and natural. My stance on the bike feels more natural and the bike comes together as a package for me. Whereas the previous bike was one I would have liked in my garage to take out when I was feeling like that kind of ride, this bike is something I’d have in my garage for day-in-day-out duties. Cutting cross town, styling, hanging out. All of the above.

I think Luke from Single Speed Cycles remembers someone of a taller stature than me though. I think I have that kind imposing presence that makes people remember me being bigger than I am. Either that or people find it hard to believe how incredibly average sized I am. Well…I’d be average if I was a female. Anyway. I’ve had the disconcerting feeling of riding my older sibling’s bike all week. This hasn’t really detracted from the ride too much. I just want to say, if you’re not as tall as you’d like to be, get the smaller size. The bigger bike is a stretch for me and would easily be comfortable for footballers, basketball players and champions of nude volleyball.

You know I edited the naughty bits out myself. It’s hard to tell right?

The new bike comes about as a result of surveys Single Speed Cycles did. You spoke. They listened. Which is much like how it works in my house. (Wife speaks. I listen.) People wanted straight blade forks (right on people!), better brakes, cleaner welds and more cake for morning tea. Apart from the morning tea, Single Speed Cycles has delivered.

People also wanted wider bars too. The previous bars were an unforgiving fixie size. I remarked at the time that I found them too small. The new bars aren’t wide but they’re wider. Just about spot on really. Not so wide that they spoil the single speed fixie aesthetic but wide enough to give you some leverage where needed. If you’re riding in traffic (whether that’s people or cars) you don’t want anything too wide but it’s nice to have some leverage for climbing the odd hill.

The brake levers were again the cyclocross-style levers I’ve seen on a few bikes recently. These are becoming standard issue on single speeds. And I can see why. They’re minimal and effective. These guys had a nice curve to them, felt natural in the hands and looked good on the bars. Sure we’d all like to remove our brakes for that fixie purest look, but those of us who value our safety or have important things to contribute to society (because society needs bike blogs you know) like to have brakes and levers. I’m kinda jealous of these levers because I went the other way when I last upgraded levers. Having ridden three bikes in a row with the same type of lever I can say that there’s a good reason why we’re trending this way. 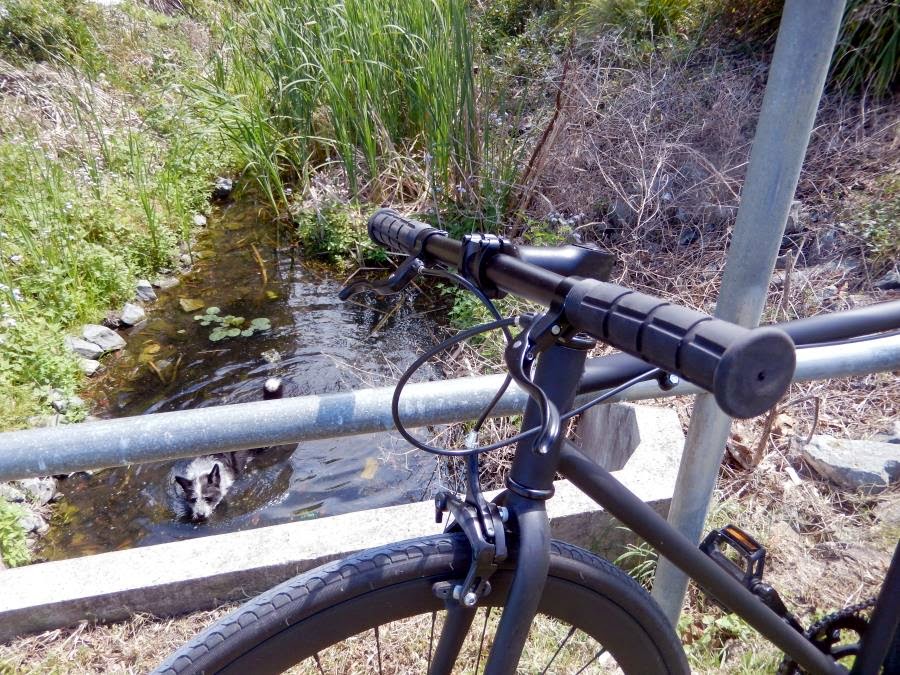 The brakes grip onto an all matt black rim. Even the braking area is black. (Or if you get the Jamaican you get orange wheels.) The black spokes connect to a black hub. You get the idea. It’s all quite black.

There are no decals on the new Single Speed Cycles cycle. You’re as anonymous as you want to be on this beast. Let your friends think you curated this work, your contribution to making society a better and more stylish place to live. Now move onto curing cancer and inventing time travel and we’ll think you’re cool and clever.

I like to have a bit of rubber underneath me when I’m riding. I was getting round on 22mm rubber for a while, just waiting to wear our the tyres really (because I’m a bit cheap you see). Plenty of bikes ship with skinny rubber but I’m not really happy with it. There’s too much that happens on the road, bike path, neighbor’s front lawn, gravel track your local council calls a cycle way…etc…that requires too much concentration with 22mm rubber. Life gets easier when the rubber gets fatter. Just how fat is up to you. I like 25mm or 28mm rubber. This guy has 28mm rubber, which is definitely somewhere around the sweet spot for rubber. I like it when thought has gone into simple elements of the bike like this. It’s not a head-down racer so it shouldn’t have head down racer tyres. These tyres make up for a lot of mistakes, allow you to pop gutters, ride over debris and generally get form A to B without having to think about it too much. And with less punctures. 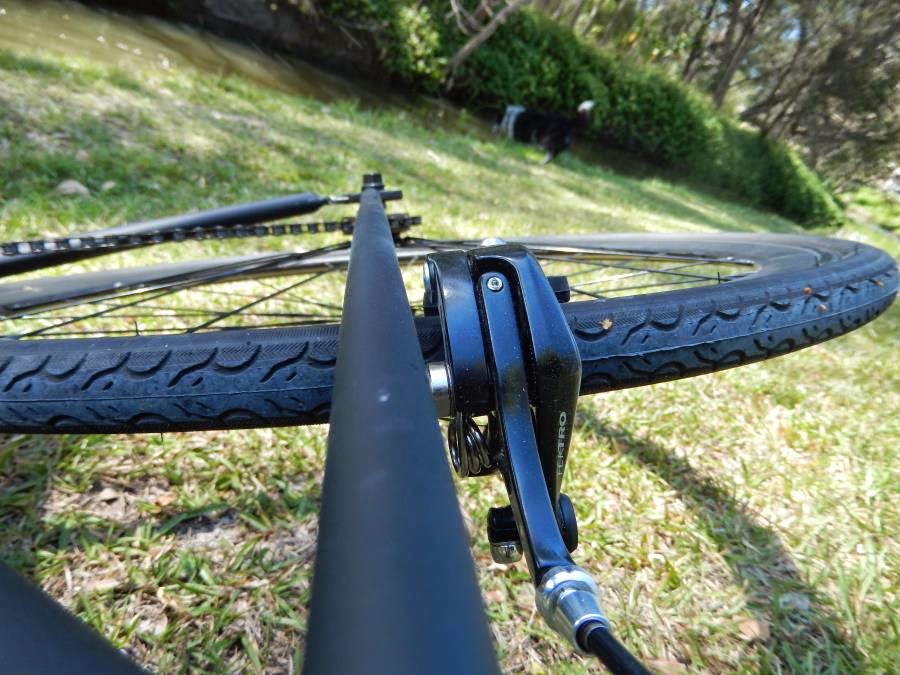 I’ve got a bit of a knocky feehub on one of my bikes. Partly why it’s riding fixed. So it was good to get onto the Single Speed Cycles and feel the reassuring presence of positive engagement and smooth pedaling. Freehubs are central to a single speed but often a little overlooked. Maybe a point to save a few dollars? This one makes a clean crisp ratchet sound and engages solidly. You feel like you’re getting good transfer through it and you’re not going to have one of those awkward did-I-just-snap-a-chain moments when you put the power down and it slips a notch. 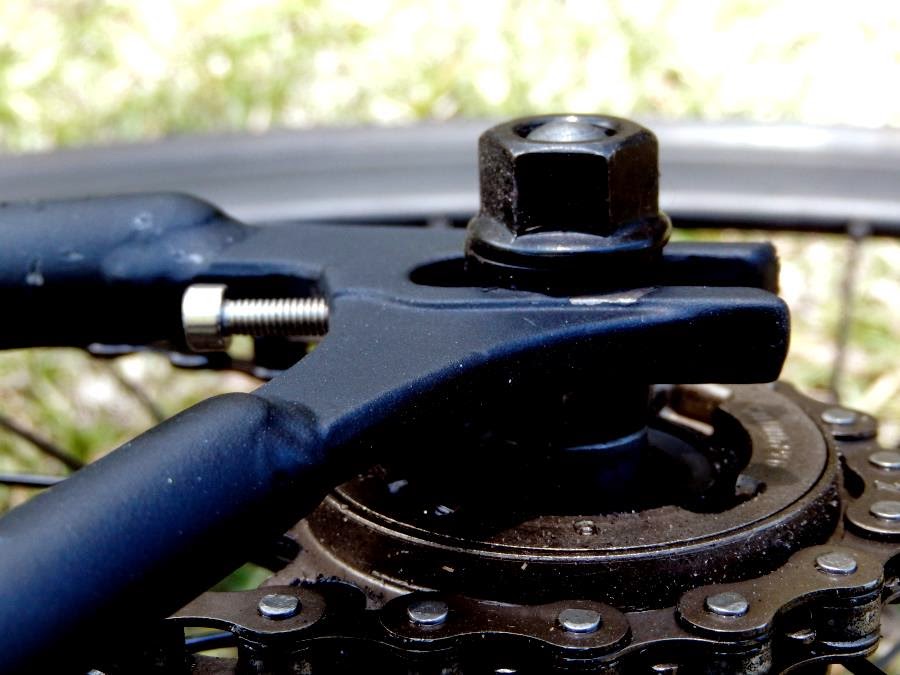 You get a nice set of chain-tugs too, making alignment and chain tension a simple task.

When you put together all the changes, you realize that this bike is no remix that’s for sure, it’s a new model with a lot of improvements over the old. We don’t do remixes any more because something better came along. And with the new bike from Single Speed Cycles something better has come along.