Did you know Fizik made a new seat? Here it is.

I know what you’re thinking right. It’s like, holey crap, where do they come up with this stuff? It’s a composite carbon nylon TwinFlex®. And yes that’s how they spell TwinFlex, with a capital F right smack bang in the middle of the word. Now that’s innovation.
There’s more where that come from. Giro have been breaking new ground in shoes.

How incredible is that? For years we’ve had to tighten our cycling shoes with clicky things strung together with bits of fishing wire and now they’ve invented shoelaces. Or ShoeLaces®.
It all makes you wonder what they’ll come up with next. Brooks, long the innovator (remember the leather saddle?) have invented a folding helmet. Big deal you say? You’ve seen folding helmets before. Yes, but not like this one, not with a line of tweed down the middle. 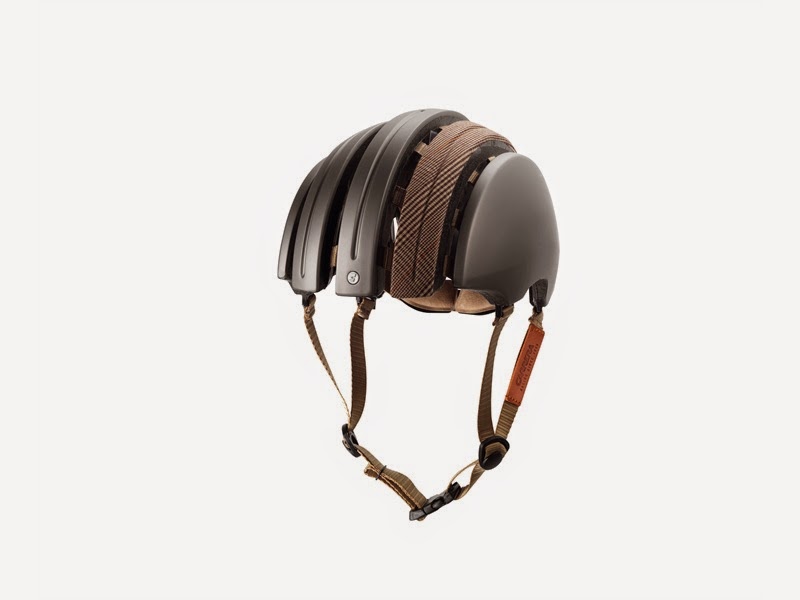 For years I’ve been wondering how to incorporate more tweed into my cycling attire and now here it is. Brooks, with characteristic modesty, tell us it is made with “modern technology”, rather than FoldOhMatic® composite technology. Shame.
Now that’s all very impressive but for true innovation you have to look to Kickstarter. When amateur cyclists and part-time inventors put their mind to filling the gaps in cycling technology they come up with the most elegant and useful things you ever saw. Things like this: 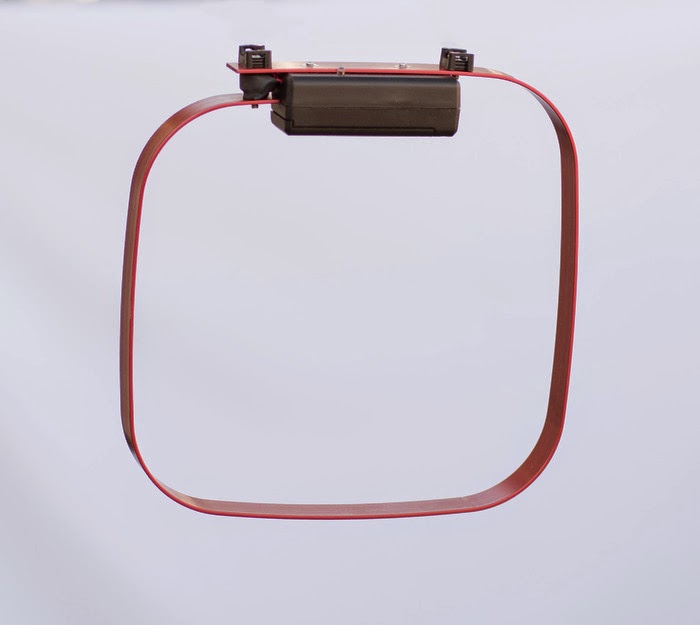 You already want one. Am I right? Well you can’t buy one because it doesn’t exist on the market yet. You invest in their Kickstarter campaign and if they get enough investors you could be attaching this thing to your bike.
What’s it do? What do you mean what’s it do? Are you stupid? It does this: 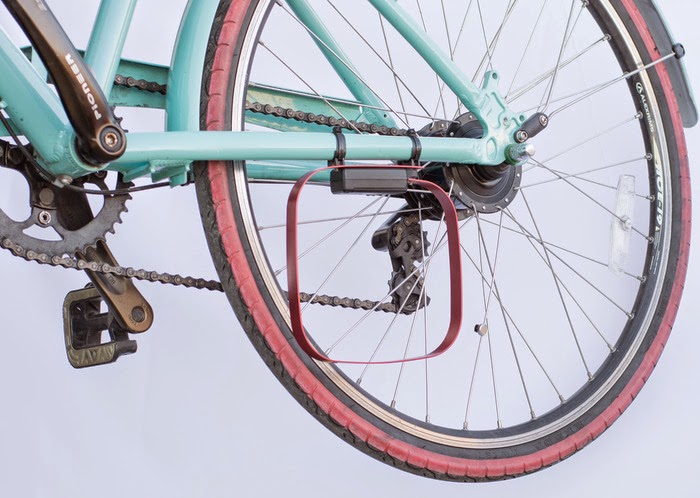 It’s an attractive and discreet addition to your bike to be sure. And functional. You know how you have to make swirvey maneuvers all over the road to activate the lights when there are no cars around? Well this thing does that for you. If you’re the sort of person who actually stops for lights when there are no cars around that is. Which personally I am not.
But that doesn’t stop me wanting something so neat and beautiful as this. And I totally can’t see how it would ever get smashed out of shape doing something careless. I think you’re mistaking me for someone else. Because I don’t do that stuff.
If that’s not the sort of thing that appeals to you then try a saddle/lock combo. Sure, it’s totally unappealing as either device by itself. But as a combination it is unparalleled. And it comes in a family pack. 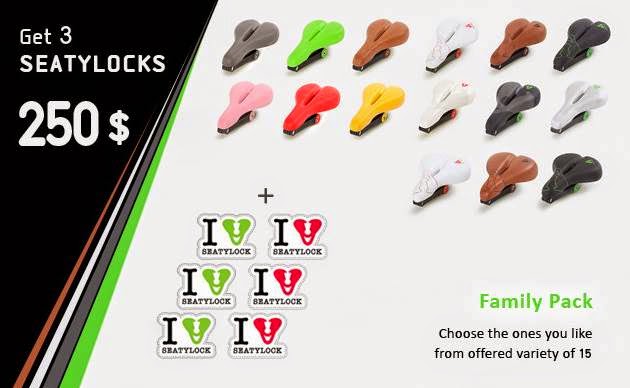 Now you never need run out of saddles that do this: 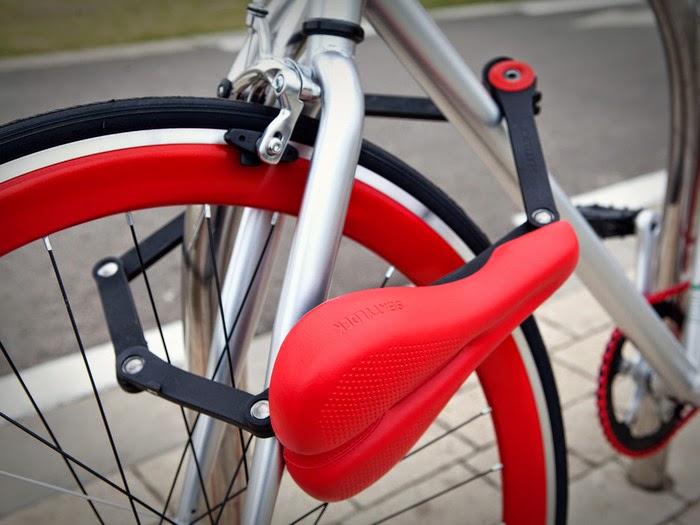 Try doing that with your Fizik saddle and you’ll need some Meccano and pop-rivets. At the very least.
Then there’s this thing that locks quick release. 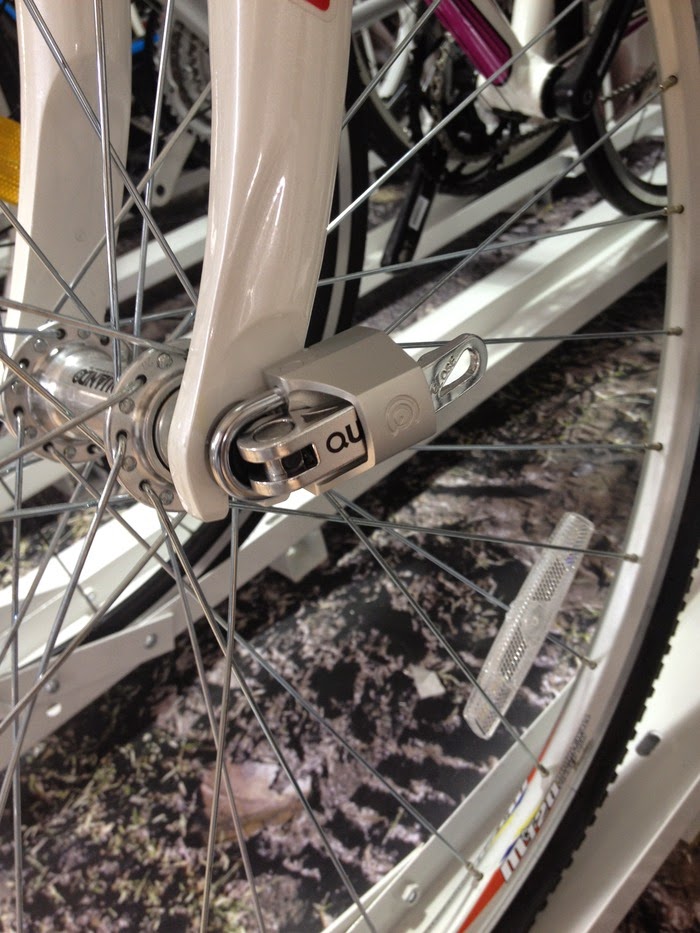 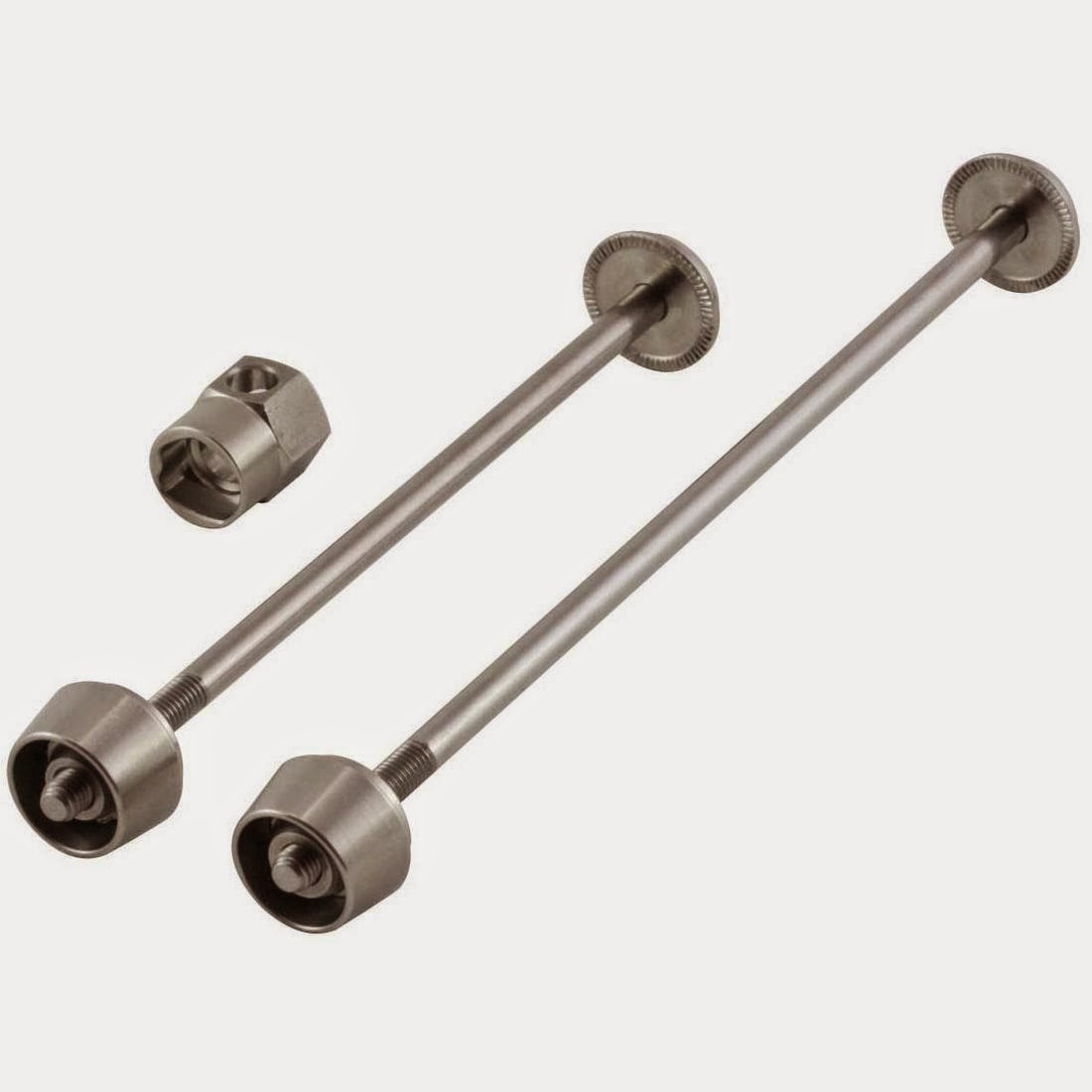 Oh sorry. They’re Pitlocks and they’ve been around for decades. I mean these: 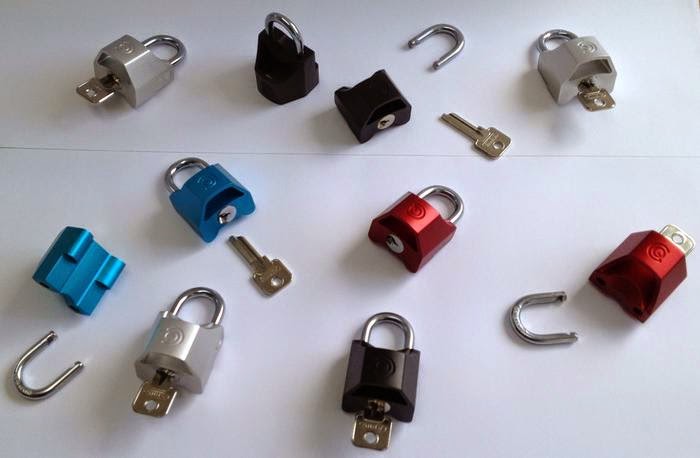 They might look like big clunky locks but they’re actually an innovative new product designed to fill a niche in the market for securing quick release wheels. They’re called Quick Caps. Not QuickCaps. Sadly.

If you’re more the sort of person who is  pining for an over-sized saddle bag then we’ve got you covered. I don’t think you’ll be able to attach this to your Seatylock (because, you know, it’s made of Meccano) but it’s an attractive and easy way to carry things on your bike. So long as you’re not carrying a laptop or anything at all bulky. 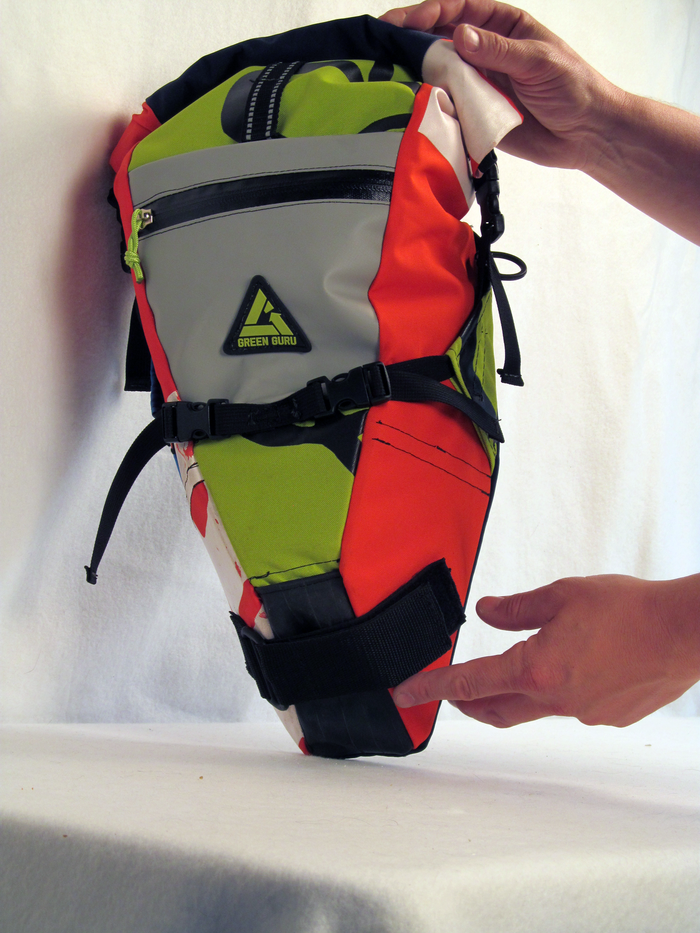 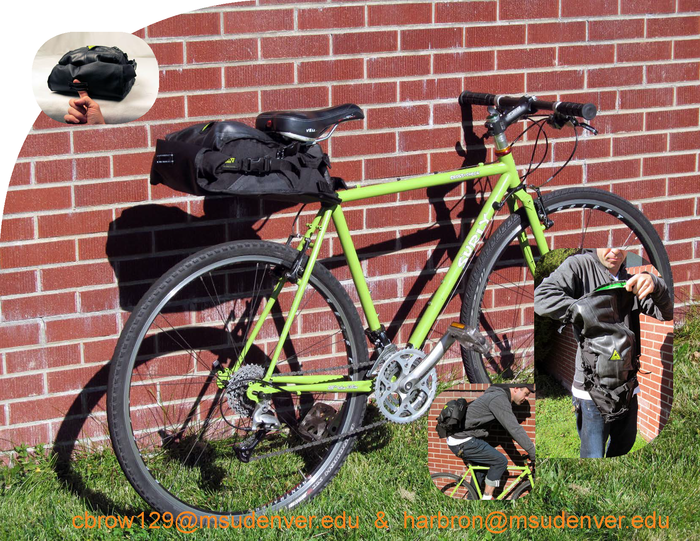 What could be more awesome than having this thing swinging off the back of your bike? Sure beats hanging a messenger bag hanging over your shoulder. If you discount the fact that messenger bags can hold all your stuff and still have room for a six-pack of beer on the way home.

Just to prove that Kickstarter isn’t the repository (or suppository if you’re our PM) of all innovation some student came up with this idea: 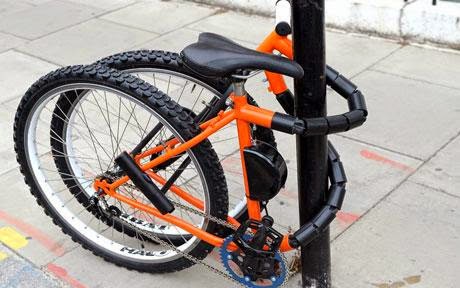 It trended all over the internet and friends sent me images of it. My first thoughts were people know nothing about cycling and this is what passes for an exciting new take on a bicycle if you’re an idiot. Imagine having a winch on your bike! On your bendy bike. But then I started to see the wisdom of it. How incredibly easy it was to lock. All you need is a great big D-lock (shown in the photo) and you can totally lock the whole bike. Good-bye Quick Caps. Good-bye Seaty Locks. Hello winch.

Kinda makes you wonder what the established bicycle industry is doing when you see so many truly great innovations coming from outside the industry. Makes you think they should be pulling up their socks. Their Mavic Pro Ride socks with ClimaRide® technology that is. 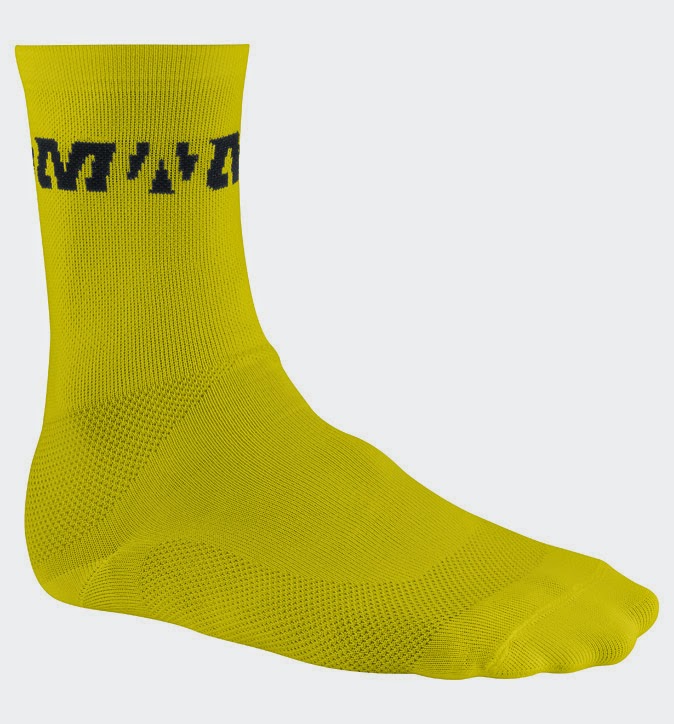