The genius of Mark Hamilton is in putting the words “car” and “friendly” together. I’m familiar with “people friendly” and “user friendly” but I’ve never heard of being friendly toward inanimate objects. Especially not an object that kills 1,300-odd people a year in Australia.

I didn’t even realize cars had feelings and could form relationships. I didn’t know they were friendly like that at all. I know there are men who love their cars. I just never realized the cars could reciprocate.

Of course, I’ve always known that some cars have personalities.

But they’re not real cars so maybe Mark Hamilton is a little confused. To be fair to Mark the extraordinary realism of Herbie The Love Bug does make you wonder. If ever there was a car that was friendly it was Herbie.

But let’s return to Mark’s genius.

Mark has a 13 point plan to make Adelaide more car friendly. Well, they’re really just 13 iterations of the one point. More cars. And sadly he leaves the best till last.

There’s nothing a tourist likes better than the opportunity to pay $60 to be driven around the city by a guy so new he relies on GPS to get him to his destinations. How could a $3.50 bus fair ever compare to that. Pity he buried this at point 13. You gotta lead with your strongest points Mark!

And order them in terms of relevance. Point 13 should go next to point 9.

Makes sense. Don’t need bus lanes if you don’t need buses. And clearly we don’t. Not once we’ve got information screens in place. Multi-lingual I hope. Touch. Latest technology.

Or maybe just put up a sign with Trip Adviser’s URL on it. Visitors all have smart phones yes? With local sims? They could take themselves on a walking tour with Siri as guide. Sure they’ll get some hefty data charges but it’ll be cheaper than the taxi.

■ REDUCE THE NUMBER OF EMPTY AND “NOT IN SERVICE” BUSES CLOGGING CITY STREETS  AND CAR PARKING SPACES.

If there are no bus lanes and no buses then you probably won’t get all those pesky “not in service” buses driving home after their rounds. Nine and ten aren’t so much related as they are the same point. Which is why I say these are largely iterations of the same point. Point ten is point nine, just expressed different. Or to put it another way, point nine is just point ten. But differently expressed .

Some might say that for people like Mark Hamilton, the logic of “revitalizing” their area is never about removing the shitty shops and services that inhabit it. Mark’s logic is to remove the shitty bus lanes and bicycles instead. When people feel they can “duck into the city and find a street park to support local business and retailers” they’ll start shopping in those same shitty shops they were avoiding before. The businesses and retailers of the city aren’t exactly “local” to the people who “duck in”. I think perhaps our shoppers are supporting their local businesses and shops back in the suburb they live in. They haven’t thought of ducking into the city to go buy something because they have better shops closer to home. Perhaps.

Yet I support Mark’s logic. There’s nothing that reinvigorates a mundane shopping strip like having people driving through it. Get that traffic moving and they’re bound to see that bracelet they’ve been looking for sitting in the back of a display cabinet at the rear of the shop.  Now all they need is a “rock-star” park right out the front and bam you’ve got yourself a sale.

It’s long been known that inner-city shopping strips can’t survive with good public transport and poor parking. Except perhaps Bridge Road and Chapel Street in Melbourne, some of Australia’s most desirable shopping locations. Bridge Road turns into an Expressway at 4pm and don’t bother showing up to collect your car at 4:05pm because it’s on a flatbed truck already. Just go straight to the depot to collect it. And make sure you’ve got your $$ handy to release it.

Mark wants to bring back the days when everyone had the opportunity to get a “rock-star” car-park out front of their restaurant. I’m tempted to suggest that Mark should try cycling. If I have to lock my further than 50m from my destination I feel like the forces of the world are conspiring against me. But then again, I’m a cyclist and have that inbuilt sense of entitlement that so annoys cartards. I’m also tempted to point out that rock-stars aren’t known for driving themselves around town or parking their Toyota Corolla out front of the Amalfi Pizzeria Restaurant. In fact, I’m not convinced that rock-stars ever go to Adelaide, but that’s another story.

If I was being unkind I might suggest that if Mark wants to get his “rock-star” car-park outside his favourite restaurant he should try the car-park at McDonalds.

Fight The Powers That Be

Phew. How about that clock right?

Mark will fight the state government’s car-parking tax. In his view it’s a cash grab that will hit everyday workers hard. You know I’m a big supporter of Mark’s car friendly policies but I’m a little confused by this one. Obviously someone has to pay for car-parks. They’re expensive. So if they’re not taxed directly then they’re taxed indirectly. They don’t get any less expensive just because you can’t see where the money is coming from. I’m sure I’m just too stupid to see how this works and Mark could explain it to me if he had the opportunity. The main thing here is Mark’s going to fight. Fight the Power.

Mark’s history with car-parking, or U-Parks as Adelaidians call them, goes back through generations. His father-in-law, John Roche, was mayor at some time not totally disconnected with the introduction of U-Parks. (The documentation is a little vague here. The two statements about U-Parks and John Roche are contiguous so I’m sure we’re meant to draw a line between them.) In Mark’s view selling off car-parks is like selling off the family silver. Wow, he really sounds like car-parking royalty. I wonder, if they ever fall on hard times, will they sell off the cardboard boxes that composed the family manor?

Did you know that cyclists compose only 0.8% of Adelaide’s city traffic? Yet they take up 20% of the road space. What’s more, cycling in the past “week, month and year” (yes, all of the above!) has decreased by a “statistically” significant 5%. That’s not just a statistic, it’s significant.
That’s insane. If those figures are true, and I’m sure Mark wouldn’t make them up, then I’m totally moving to Adelaide. One thing I can’t stand is sharing my bike lanes with other cyclists scum. And in Adelaide it appears I won’t have to.
You know, I have a great distrust for so-called experts. I’m more comfortable with made-up figures and misinformed commentary like Mark’s. That’s why I’m such a big supporter of his. But I have to at least acknowledge what Dr Jennifer Bonham says. According to the Adelaide Uni staff directory “Jennifer Bonham has a background in human geography specializing in urbanization and cultural practices of travel.” Whatever that means. Sounds like she’s up herself if you ask me. Anyway, her research shows that the amount of people cycling to work in the last five years has grown by 50%.
One thing I’m sure we can agree on is that the “proliferation of cycling lanes is out of control”. Whether cycling has decreasing by 5% over this week/month/year period of Mark’s or “has increased by almost 50% in a five-year period” (Dr Bonham), one thing you don’t want to do is encourage the bastards. Of course, when we say “cycling lanes” we’re really just referring to those white lines and cycle figurines painted on the road surface. That’s the area cars drive in when they’re turning, need a better view up the road or otherwise just distracted by the task of texting. That’s our 20% of the road. So it starts to look less like insanity and more like political pragmatism. Several thousand litres of paint allows you to state “our government grew the cycle infrastructure by 30% in our term” when it comes time for re-election. Now that’s insane. 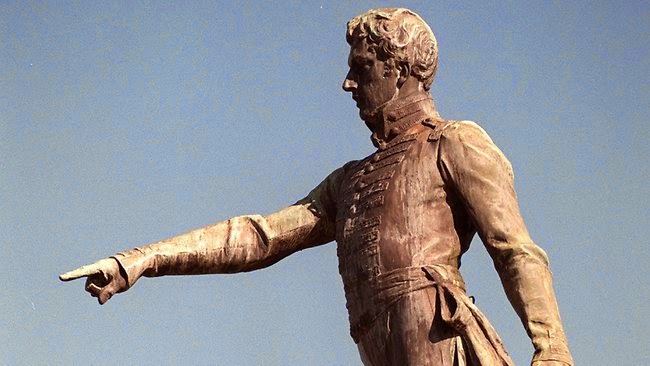 So it seems reasonable to draw analogies between the two cities. Mark wants taxi display screens “just like in New York”. Of course, New York also recently adopted a bike share system and has seen a proliferation of cycle lanes. Just like in Adelaide (or pretty much any city with cycle lanes) people (as in: people in cars) complained in New York about how the lanes were slowing them down.  And quite rightly. Something was stopping them from getting to work on time. And it surely couldn’t be the traffic lights or all the other cars. Sadly, it’s been proven that cycle lanes actually decrease car travel times.  Maybe Mark should stop drawing anaologies with New York. In case we get all proliferatory with our lanes and (God forbid) start discussing a bike share program.

Finally, Lord Mayor Mark Hamilton (I’m making an early call) won’t allow the compulsory cycle helmet laws to be rolled back. Thank goodness. It’s wonderful to see a mayor whose powers reach into the state government to control the legislation that passes through there. I’m not sure how Mark’s going to do this without a referendum or some kind of re-drafting of the powers of government but good luck to him on this one. As one of his most ardent supporters I have total faith in his ability to rule both within and without his boundaries as mayor. Probably give the UN a dusting up too. And solve the crisis in Ukraine.
Good on him. He’s a man of vision and a man for the people (well…cars…) of Adelaide. As Adelaide’s first car friendly policy maker I suspect there are no limits to what he can achieve. I for one will be casting my vote for him. I don’t actually live in Adelaide. But if Mark can legislate on state issues as mayor, I can sure as hell vote for him from the Gold Coast.